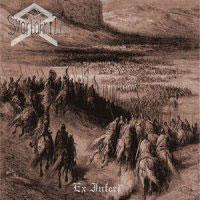 Five albums in and I had never heard of these guys before! Perhaps they have managed to stay beneath the radar because, in the incestuous Norwegian BM scene none of them have collaborated with a major name act (to my knowledge, anyway)? Perhaps it’s because their approach is a little too simple and unadventurous? Read on…

What I can tell you is that Svartahrid are highly competent producers of classic, straight-down-the-middle Norwegian Black Metal. And that is where the problem lies. There is nothing strange or unusual to attract and capture the listener. The production is clear and modern. Keyboards add tone and flavour. Blastbeats give way to slower, chugging passages and black thrash interludes. But there is nothing we haven’t heard before and the approach is so by-the-numbers that even though you will like some of the tracks, the album is unlikely to command more than a passing interest.

This is the kind of record that you could easily buy and enjoy, if only you could stop thinking about what you might have bought instead.

ENCHANTING DARKNESS – From Below