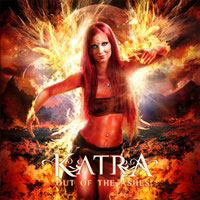 KATRA – Out Of The Ashes

Finnish act Katra follows up their 2008 debut "Beast Within" with a new 10 song album of gothic metal with just as equal an emphasis on the melodies as the music. Whether electric and intense such as opener “Delirium” or harmonic in terms of the keyboard/ guitar syncopation within “Vendetta”, Katra isn’t relegating their style to mirroring veterans like Nightwish or Lacuna Coil. And when the band decide to incorporate acoustic/ folk strains through the main verses of “One Wish Away”, you easily get swept into the outer regions of your mind, especially with Katra Solopuro’s light, airy melodic delivery.

The second half of the album declines in terms of strong hooks compared to the first five tracks – which I believe will hinder their overall impact in becoming a band that has longevity. Songs like “Mirror” and “Anthem” seem to feature harmonic echoing guitar lines and then heavier, more modern riff techniques that I’ve heard hundreds of times performed better by the older, wiser groups in the genre. Drummer Matti Auerkallio displays versatile chops in all the songs, hitting the right see saw element between flashiness and keeping the groove, but one musician can’t save average songwriting.

And a ballad like “The End Of The Scene” may follow a similar motif as The Moody Blues’ “Nights In White Satin”, but can’t come close to the emotional buildups and crashing crescendos of the latter – just rendering the material again in an apathetic manner.

You may think I’m being harsh, but I sense potential in Katra, if they are willing to do the necessary critical songwriting work it will take to push up to headlining sold out clubs or arena tours.