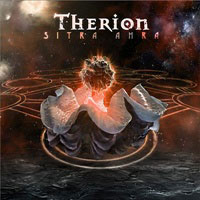 Once again partake in the special, well-honed craft that is Therion. Their evolution through the years sparks much debate, as I’m sure many prefer their older, more death-oriented early years, while others are mulling around in their brains the slightly more straightforward, traditional leanings of their past couple of efforts. It’s irrelevant to this reviewer. The title track “Sitra Ahra” incorporates the thematic and cultural strains we’ve come to know and love, the classical choir vocals and often appreciated exotic instrumentation beyond the normal metal conventions – giving you a 61 minute plus sanity break.

Most notable on the vocal front would be the addition of Thomas Vikström, replacing Mats Leven who held down the majority of the male vocals for 2007’s "Gothic Kabbalah". For "Sitra Ahra" guitarist Christofer Johnsson and company appear to experiment more with ethereal textures against the norms of metal. For instance, “Kings of Edom” contains a galloping electric guitar riff motif remindful of the charge of the light brigade and then the very next riff can be an acoustic Middle Eastern exploration – while the subsequent vocal passages recall the Middle Ages battling the Revolutionary War between the female and male call and response delivery. Meanwhile the follow up “Unguentum Sabbati” has keyboard parts and background choirs in line with early King Diamond and a progressive feel with some of the mid-tempo key changes.

Then you have the 10:32 weirdness of “Land Of Canaan”. Keyboard strains at the beginning that mirror the wildness of Missing Persons or Berlin, echoing guitar riffs that spiral into spider-like maze work – and then you hear a distinct harmonica and flute duet for a small period of time which adds to the majesty, mystery and mystic of Therion’s brilliant forward thinking mentality. By the time you conclude the album with “After The Inquisition: Children Of The Stone” you seriously know you’ve been taken on a journey that typical metal acts – progressive, symphonic or whatever sub-genre you want to cast out – just can’t pull off because they lack the emotional component to balance the experimentation.

Therion will never be an act I can experience on a daily basis. You do need the correct mindset going in to fully grasp the songs and these albums in their entirety. "Sitra Ahra" shows Therion heading in the direction most will applaud – and I’m glad to see that Snowy Shaw will be around for the tour, as I think these songs will go over wildly.

GHOST MACHINERY – Out For Blood