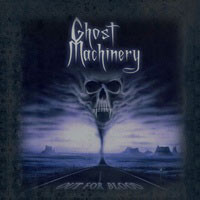 GHOST MACHINERY – Out For Blood

Most will probably be aware of Finnish guitarist/vocalist Pete Ahonen with his other act Burning Point and their four album releases through the 2000’s. Biding his time to find the right record deal for one of his other acts, Ghost Machinery hit the market at a time when a lot of the veteran power/ traditional acts appear to be coasting in terms of their songwriting (Iron Maiden) or just developing their sound in directions their main fan base can’t understand (Sonata Arctica).

Former Altaria vocalist Taage Laiho joins for this second album – six years removed from their debut “Haunting Remains” – and if you’ve been awaiting a dynamic album that showcases respect for all things traditional, power and slightly neo-classical throughout the hard rock/ metal genre, “Out For Blood” could be your killer platter. Pete’s soloing technique recalls the fluidity of Michael Schenker and the virtuoso ability of Yngwie Malmsteen – both on display in an energetic track like “Name Remains In History”. The band excel when they navigate away from conventional speed double bass and up tempo rhythms – “Guilty” featuring a killer chorus hook from Taage and a music backbone in line with Tony Martin-era Black Sabbath meets “Odyssey” time period Yngwie.

Drummer Jussi Ontero performs double duty with the keyboards, and his choice of tone and chord emphasis brings to mind the early days of Elegy and Letter X on tracks like “Fortune Teller” and the ballad “Lost In Time”. Do not fear though power mongers – those of you who love your spirited guitar runs, furious drum parts and larger than life choruses that you can scream your guts out to need only hear “Face Of Evil” or “Eternal Damnation” and I’m sure you’ll know the style is still alive and thriving. And I even enjoy the closing Blackfoot cover “Send Me An Angel” – probably one of their more commercial offerings but proof that classic material remains timeless.

I’m hopeful that power, persistence and passion will equal increased sales and exposure for Ghost Machinery – as they smash this one out of the park.