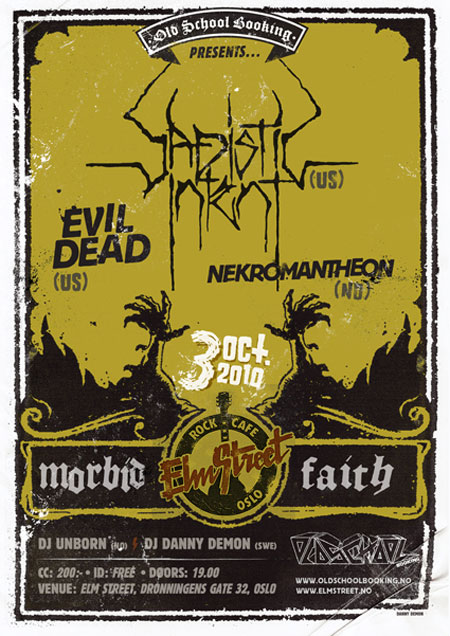 Yeah! Once again Sadistic Intent lands on Norwegian ground. Last time they were here was at Bergen’s Hole In The Sky 2008 festival where they played the asses off most others. Now it’s Oslo’s turn to be blistered by this high energy death metal band. Formed in Los Angeles ,California in 1987, debuted on vinyl with the "Impending Doom" EP in 1990. Since then they have experienced many line up changes. Today the band consists of Bay Cortez (bass/cocals), Rick Cortez (guitar), Ernie Bueno (Guitar) and Emilio Marquez (drums).

Sadistic Intent has also functioned as backing band for Possessed’s Jeff Becerra in the later years which shows their high level of credibility and musicianship. This band is the 100 % genuine article. They play what they mean and mean what they play. You will see what we are trying to say when you see them live at Elm Street. In the meantime if you are not familiar with Sadistic Intent, check out their "Resurrection Of The Ancient Black Earth" album. After you hear that…words become unnecessary.

This band from Los Angeles formed as early as 1987. From their first demo the same year they succeeded in landing a deal with Steamhammer/SPV in ’88 and released one EP, 2 full lengths and a live album up until 1992 when they disbanded. Now reformed in 2009 they will deliver their speed/thrash with punk overtones with their original line-up + 1 at Elm Street supporting  Sadistic Intent. The dead are evil: EVIL DEAD!

These thrash maniacs from Kolbotn are ready again. This lot consists of members from Obliteration and Audiopain. Formed in 2005 they released their "We’re Rotting"debut EP in 2007 that received a good buzz in the underground. Today in 2010 they are hot with their full length album "Divinity Of Death" alongside their split 7" with Audiopain. These motherfuckers know what they are doing, so expect a blistering rotten thrash metal performance from Nekromantheon who definitely mean what they play. We tip our hats and raise our fists!! All right!