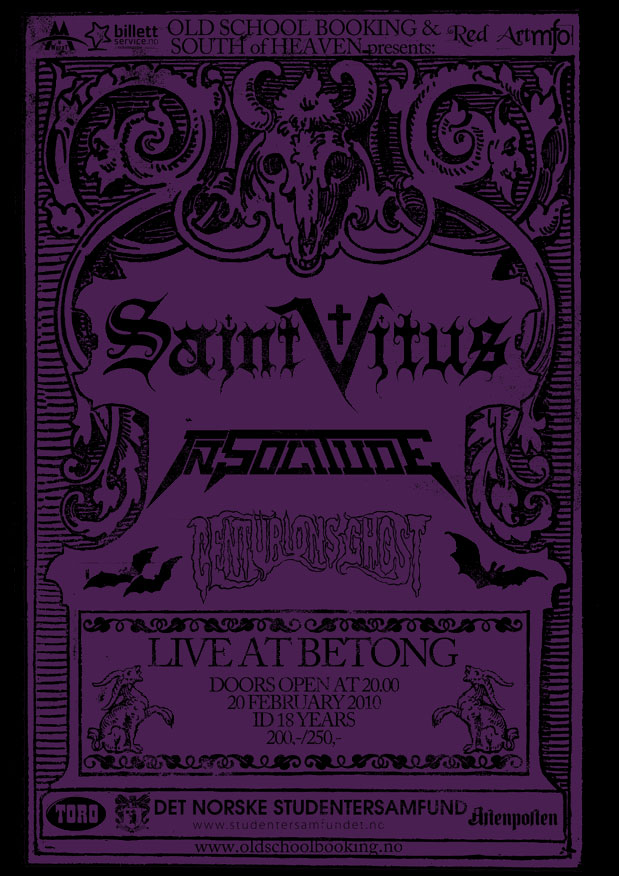 Allright! Bullets and gunpowder! Old School booking is once again inviting living legends to Norway. This time they introduce none other than Saint Vitus. If your heart beats like there is doom at your door, it'll skip a beat or 2 just now. Its right: saint Vitus finally lands on Norwegian ground. Believe it or not, the 20th of February 2010 they'll be on stage at the Betong venue in Oslo.

Saint Vitus is not small news. These boys, or ehem, grown men, should need no introduction, but let's give a quick résumé for those who are yet to be seduced by this glorious band .AAHHH!

The guitarist Dave Chandler formed the band in L.A. in the late 70s. They were one of the first doom bands to emerge from the waves of Black Sabbath's crusade in the same decade. The name itself was taken from the Black Sabbath song "Saint Vitus Dance" from their "Vol 4" album (1972). Even if Saint Vitus had lots of Black Sabbath's bluesy elements, they also mixed in inspiration from punk and especially Black Flag was a reference point.

After a couple of years and albums with vocalist Scott Rieber in the lead, the bone-hard Scott Weinrich took over the microphone. Weinrich, also known as "Wino" had already made himself known through his own band The Obsessed. It was nevertheless with Saint Vitus things started to escalate and his legendary status was nailed forever. Along with other American bands like Pentagram and Trouble, and the British Witchfinder General and Pagan Altar, Saint Vitus set the standard early on how doom metal SHOULD sound. 13 tons of downtuned guitar, hypnotizing, thundering riffs, a desperate and melodic clean vocal with harmonies and atmospheres sending you straight to another dimension. If you are at first trapped by doom, it's almost impossible to convey back to reality. Bun then again, who wants that anyway!

20th of February is the date to mark at Betong. You have no reasons not to be there this night. Support acts are Swedish In Solitude and the British Centurions Ghost. A night without comparison. Doomed to be Great!