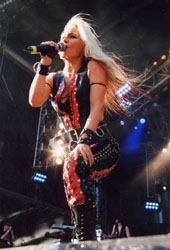 Every year the Wacken Open Air is a world standing for itself, in principle like a temporary but souvereign country. The question now is: What does a country, which exists more than 20 years and which moreover celebrates its birthday, need the most? Damn right: An anthem!

“We Are The Metalheads” is the title of the first official Wacken-Anthem and it will be presented from the one and only DORO PESCH!

The anthem is about the community-feeling of the metalheads, about the power and the energy which is given by this music – and of course it invites you to sing along and to party hard!

The song will be first-released on 30. July 2009 at the W:O:A, and no one else but the ex band SKYLINE of Wacken-organizer Thomas Jensen (along with Wacken-founder Gösy on the drums), which has re-united for that special gig, will perform the song along with DORO on stage.

The anthem will be available for gains at the Wacken Open Air as well as in regular stores and on all popular internet-platforms. Since all gainings will be given away to charity organizations like “Ein Herz Für Kinder” (A Heart For Children) or to the “Wacken Foundation”, which supports young musicians and Metal Bands, we highly recommend buying the song to all Metalheads!