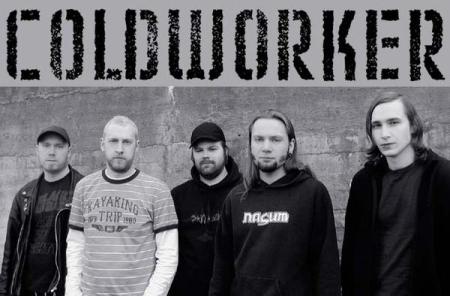 COLDWORKER, featuring NASUM drummer Anders Jakobson, have recently completed work in the studio on their follow-up album to their debut release, The Contaminated Void. This self-produced effort, Rotting Paradise, is currently being mixed and mastered at Unisound studios with Dan Swano (OPETH, KATATONIA, DISSECTION). Rotting Paradise's complete track listing is as follows: "Reversing the Order", "Citizens of the Cyclopean Maze", "Symptoms of Sickness", "The Black Dog Syndrome", "Comatose State", "Paradox Lost", "The Last Bitter Twist", "Seizures", "The Machine", "I Am the Doorway", "Scare Tactics", and "Deliverance of the Rejected". The Japanese edition of Rotting Paradise will also include a cover of SEPULTURA's "Necromancer".

"The second Coldworker album will be a very intense record. " Jakobson says of the album. "We've worked hard on the songs during all of 2007 and we've cut every corner to make the songs as good as possible. Can't wait to share them with you all."  Rotting Paradise is expected to see a Spring '08 release date.