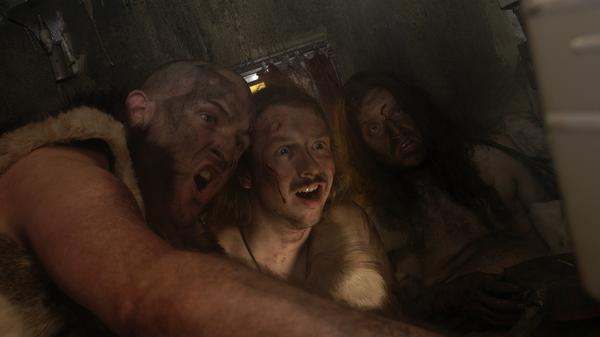 Boorish Norwegian four-piece GOAT THE HEAD have been busy running amok in an abandoned trailer park in the Trondheim periphery this past week. ..

The uncivilised 48-hour chaos spree was filmed by passers-by just before the local police was called out. Two of the incriminating pictures taken from the footage are in our Pics section. Check them out!

The uncensored footage (now turned "promotional video") for epic track 'Darwinian Minions' (duration: a whopping 16") sees the four cavemen grappling with a variety of odd situations, including the discovery of pornographic material. Directed by some other scantily-clad brute, Øystein Moe, the video will be available (though probably not suitable for tv broadcast) from mid August.

Experience history and anthropology live at Hulen in Bergen on Saturday, 25th August where GOAT THE HEAD will be performing their previously unreleased debut material from 14:00.

Combining the ferocity of MORBID ANGEL and the musical dexterity of GENITAL GRINDER, uncouth and coarse in appearance like nobody else before, the Trondheim-based band will unleash a 30-minute set featuring tracks off their debut, 'Simian Supremacy' (out on 22.10.2007 in Norway and 19.11.2007 in Europe).

Featuring Per Spjøtvold (ATROX) on vocals, Ketil Sæther (ex-LUMSK) on guitar, Snorre A. Hovdal on bass and Kenneth Kapstad (ANIMAL ALPHA, MOTORPSYCHO) on drums, GOAT THE HEAD prefer to keep it "simple and organic". Just don't forget your wooden club next month.