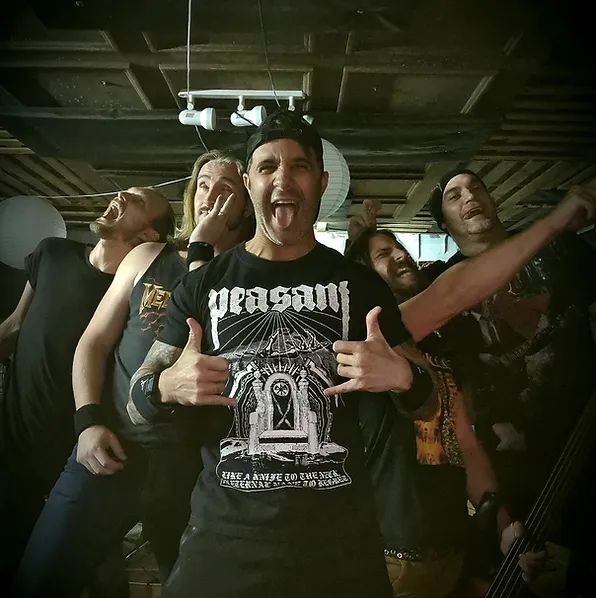 DEADLINE – new single and video out

The pioneers of the ‘New Wave of South African Heavy Metal’ are back on Friday the 13th of January with their new powerhouse single and music video ‘Cult of Prometheus’.

Deadline openly bow down to the memory of 80’s Thrash Metal, Power Metal, Heavy Metal and on occasion Sleaze Rock, as they march with intent and pride towards the release of their 3rd album, ‘Vitriol Inc’ that will undoubtedly be their most daring release yet.

Our collaborator, Asher Locketz @alocketz1, awards it a score of 5 out of 6 and comments the following:

“Explosive, propulsive and fraught with ferocious splendour, the newest single by South African sonic collective Deadline entitled ‘Cult of Prometheus’ is a swashbuckling slab of molten Heavy Metal that will set your synapses ablaze in a conflagration of sonic glee.
Taken from their upcoming album ‘Vitriol Inc’ this hedonistic piece of pummelling drums, soaring vocals, and scorching riffs is Heavy Metal distilled to purest and most primal essence; a slice of searing, leather clad auricular incandescence that draws upon mythology to present us with a turbulent sonic tapestry that speaks of sovereignty in the face of subordination.

Available for your listening pleasure from Friday the 13th of January, ‘Cult of Prometheus’ will hold you captive in its grasp as you are spirited away on a tide of surging rhythms, sweeping melodies and galvanic pacing. Be sure to clamp your peepers upon the accompanying music video which acts as a great visual accompaniment to this gnarly track.

Opening with a froth of pummelling drums and blistering guitar histrionics and progressing on a trajectory of rapturous, hedonistic Heavy Metal hellfire, ‘Cult of Prometheus’ is an exercise in volcanic Heavy Metal vibrancy that harkens back to the glory days of Judas Priest, Raven, Mercyful Fate, Saxon and Savatage. Peppered with a sparkling solo in its latter half and continues to charge ahead with unbridled swagger here is a song that straddles the divide between scintillating, streamlined and savage with aptitude.

Herein the searing vocals of frontman Jessy Switchblade, the bone crunching riffs of Judge Mental and The Skullprit alongside the beatific bass assault of Damien Dread and the dexterous drumming of Wrighteous Mike collide like a supernova, leaving a constellation of diabolical light and celestial detritus in their wake.

Folks, this song embodies Metal! It is a triumphant call to arms! It is a visceral slab of potent Metal that is as uplifting as it is empowering. Don your studded leather belts and patch spattered denim jackets as you prepare to pump your fists skyward in heathenistic celebration for ‘Cult of Prometheus’ is the sonic equivalent to a wild bacchanal.“

Vocalist Jessy Switchblade shares that “This song is based on the story of Prometheus, who stole the fire from the Gods and gifted it to mankind. It’s about the free thinkers, those who spread hope, those with forethought, those who question everything and take action against what they’re told and what they’re forced to believe. This song is dedicated to them, to us, to the tragic hero roaming planet earth. Prometheus was the ultimate anti-hero, both a trickster and a hero, an advocate for humanity, a purveyor of rebellion. This song is dedicated to the trickster in every one of us, who will break or bend rules to be different, to rise above, to create beautiful, controlled rebellion.”

Jessy elaborates that “As far as the cover is concerned, we decided to do a tribute to old school power metal covers. This one is largely inspired by Manowar and Primal Fear. We tied it up to the story of Lady Blitzkrieg and Deadline, after Abigail’s Crypt, Deadline have captured her and tied her to the church steeple and the eagle has been sent to attack her (It mirrors the story of Prometheus).”

We are metal! We are fire! We are legacy! We are energy! We are power! We are Deadline!

From choosing a band name taken from a Testament song, to wearing their beautifully crafted battle jackets emblazoned with the names of their favourite heavy metal bands, the quintet is hellbent on bringing the nostalgia, exuberance, and blood thirsty passion of the 80’s without necessarily pigeonholing themselves in one sole genre.

Formed in Pretoria, South Africa in 2014, Deadline played their first show at a friend’s house party on 7 March 2015 and have not looked back since. 2 albums and an EP later, they have become the fore runners of the Old School Heavy Metal sound in South Africa which they have dubbed the “New Wave of South African Heavy Metal”. With 6 South African Metal Music Awards to their name, a dedicated fanbase who dub themselves the “Deadline Heavy Metal Crew” and an energetic, passionate live show second only to their heroes Iron Maiden, they march with intent and pride towards the release of their 3rd album, “Vitriol Inc” that will undoubtedly be their most daring release yet.

Led by the effervescent, high flying Frontman Jessy Switchblade, Deadline have undergone a few core changes during the pandemic, but have now solidified their line up around guitarists Judge Mental and The Skullprit (the last original member along with Jessy), bassist Damian Dread and percussionist and back up vocalist Wrighteous Mike. The quintet is hellbent on bringing the nostalgia, exuberance, and blood thirsty passion of the 80’s without necessarily pigeonholing themselves in one sole genre. Their music transcends genres, it transcends generations, it’s an ode to the decade that changed us forever. Sit down in your Lamborghini Countach, strap your seat belt, and let their crashing drums, pulsating bass rhythms, bright neon guitar riffs and screeching vocals take you back to your glorious metallic past! “Vitriol Inc” will be out early 2023!’