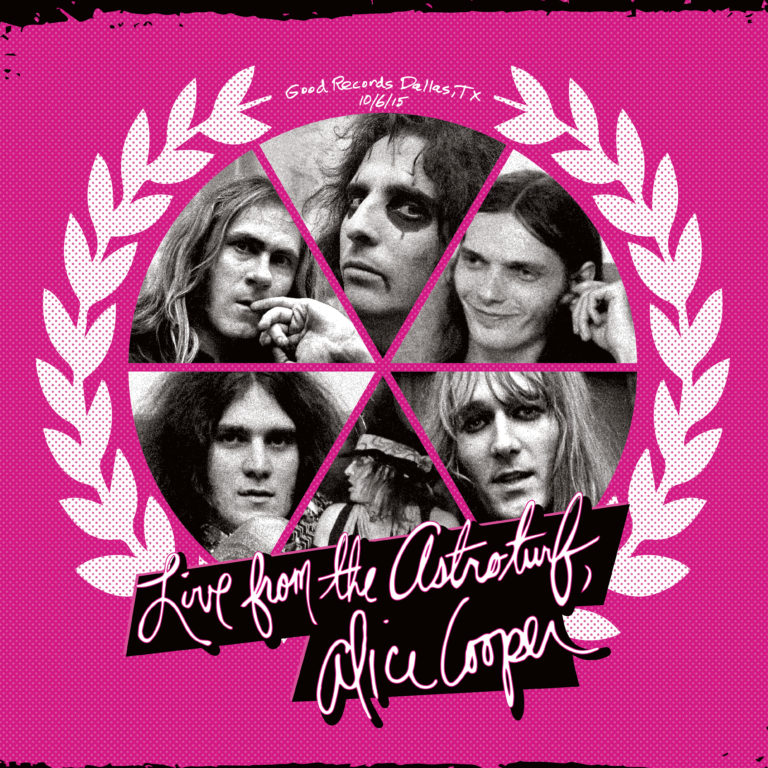 ALICE COOPER – Live from the Astroturf

What a lovely little package this CD/Blu Ray release is! Back in 2015, the remaining original members of the Alice Cooper band reunited on a small stage in the Good Records store in Texas and played a short and concise set of songs in front of a rapturous audience. The event was listed as a “Special book signing & Happening” as Dennis Dunaway had his brilliant autobiography titled Snakes! Guillotines! Electric Chairs! published just a few months before, so imagine everyone’s surprise when Michael Bruce, Neal Smith, and Dennis were joined by Alice himself on stage (along with renowned guitarist Ryan Roxie filling in for the sadly missed Glen Buxton). These legends delivered a blistering, vibrant, and utterly thrilling show containing old gems ala ‘Caught in a Dream’, ‘Be My Lover’, ‘Is It My Body’, ‘Under My Wheels’, and ‘Elected’ among other goodies and treats. Stripped down and minimalistic, the whole thing is loose and raw, and you can tell that the band are having a marvelous time on stage together. The atmosphere is electric and enticing, the crowd is all smiles, and we should all be fucking grateful that it was captured on tape. Four musicians made magic together all those decades ago, and that unique thing is still there to this day.

The documentary film, which also includes the full show, is a great watch and takes you close to the action on stage, and one can literally feel the joy and excitement in the air. The extra features include an illuminating Q&A session with Michael, Neal, and Bruce – promise me that you do not skip that part as it is filled with hilarious anecdotes and stories. Speaking of which, the liner notes to the CD/Blu Ray are interesting too.

Charming, captivating, and quite obviously an essential listen, Live from the Astroturf is inspired and inspiring.