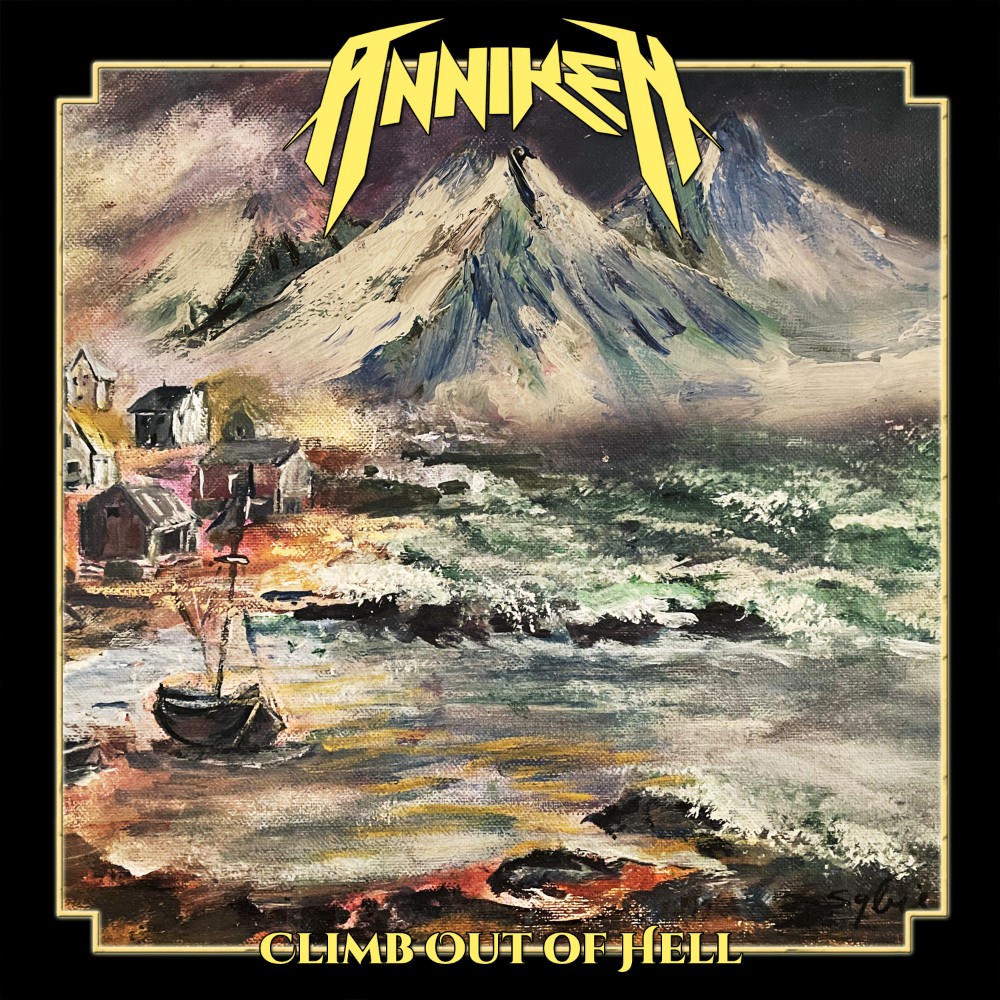 ANNIKEN – Climb Out Of Hell

I wish there was a God, I’d pray for salvation…If somehow, I could believe, that there was a saviour then maybe this life I lead would be less filled with sin. If there’s no god, no light at the end…then tell me what’s the meaning of it all (Save Us*)

Sometimes a chosen series of reviews seem to form what in spiritual language is known as a progressive revelation. From Revocation’s “Netherheaven” – the wounded by the purported light running into the darkness, through Lamb Of God’s “Omens” – a scathing prophecy for the dying world and the shepherds standing for the oppressors instead of the oppressed, onto Lacrimose Profundere’s “How To Shroud Yourself With Night” – the lost in this cold heartless world just wanting to disappear, and finally onto Into Nothingness’ “Black Sun Funeral” – sadness like a cross seemingly handed down from above – seldom have my seemingly disparate reviews formed such a clear path to the clear conclusion: we need something more than this life. The prophets have failed to convince us there is a light while the deniers that we don’t need one as we continue to ask: why am I here and where am I going? And in all that confusion the Norwegian woman Anniken “Nikki Pink” Rasmussen Danielsen bravely emphatically exclaims: “I wish there was a God, I’d pray for salvation!”

“Climb Out Of Hell”, which is dedicated to Sylvie Rasmussen, Anniken’s grandmother, whose two paintings grace the cover, may be Anniken’s debut solo album but it’s not the first one she has ever been a part of. In fact, Anniken used to be called Darkest Sins (with two albums: the eponymous²⁰¹² and “The Broken”²⁰¹⁶), which she had then formed with her now husband Marius Danielsen. Then there was Ana – Metal For Charity and Anniken was a bassist and lead vocalist and lyricist for Marius’ trilogy Legend Of The Valley Of Doom before changing the name Darkest Sins to just Anniken for her debut album, and may I remark that it is pronounced very much like Anakin, the Skywalker of “Star Wars” fame?

Anniken and her husband are both graduates of a music university and that can be heard and even felt throughout “Climb Out Of Hell”. The music has been meticulously arranged as if by Ludwig Van Beethoven – 9 symphonies more than 9 tracks. Consequently, the heavily neoclassical opener “Spotlight” almost mirrors the near operatic closer “Amplified”, while the “The Clairvoyant” Iron Maiden of the title track answers to the “Only The Good Die Young” of “No Name” (with a “Human” Death-like solo of Nils Courbaron). The songs deal with fears of failure and success on stage and various emotional states and struggles such as the “one foot in front of the other” approach of the depressed, downtrodden and lost. Then we have twin (somewhat) ballads “Back Then” and the Paco Bell’s “Canon D”-like (so, too, then While Heaven Wept’s “Vast Oceans Lacrymose”) “Star” which leaves us with three siblingless compositions: “Just Walk”, “Keep The Light” and “Save Us” which deserve each a separate paragraph.

“Just Walk” is my second favorite because it’s just a perfect heavy metal anthem which goes from marching “Eye Of The Tiger” Survivor verses through a split second stop-and-start and a very catchy “o-ooo” power metal chorus, fantasic solo (courtesy of Fredrik Enochson) and it’s the words “feel – you don’t have to think all the time” , “feel – let your mind go blank alone in the aftermath”, “as I wander my mind wanders too” and, especially, “I am what is right and what is wrong with me” where it dawns on me that this song is like a mind affected by Attention Deficit Hyperactivity Disorder, which, you know, it takes one to know one.

“Keep The Light”, musically recalling both Paradise Lost’s “Mouth” and, interestingly, In Flames’ “World’s Within The Margin”, is a tribute to the late Linkin’ Park frontman Chester Charles Bennington (R.I.P. 2017) and it is particularly inspired by Linkin’ Park’s song “One More Light”, the title track from Bennington’s last album before his suicide. Anniken vows to keep the light of what he had conveyed through Linkin’ Park, for he had made it “ok to hate…easy to cry…possible to feel…tolerable to smile” and the chorus purposely features some “Hybrid Theory”²⁰⁰⁰ rhythmic nü metal stylings and two guitar solos courtesy of Bill Hudson and Tommy Johansson.

All the existential quandaries seem to culminate on the favorite The Scorpionsy “Save Us*”, a ballad so spiritual from the mouth of self-admitted non-religious person, it might as well be Christian music and for good reason. Anniken makes a three prong point: first recognizes the possibility of God, then she admits the need for a savior and finally acknowledges the abundance of her own sin, a point which is not just extremely unusual for a secular artist to make (last time in my memory Björn Strid with Act Of Denial) but is profoundly Biblical. It is written that whoever comes to God must believe that he is, and that he rewards those who seek him (Hebrew 11:6, REV), and even Apostle Paul, one of the most righteous people in history, confessed by inspiration that he does not understand his own actions, for he is not practicing what he wants, but he is doing the very thing he hates (Romans 7:15, REV) and though, delight as he does in the law of God so far as his inner self is concerned (v. 22) he sees a different law in the members of his body, waging a war against the law of his mind and bringing him into captivity to the law of sin that is in his members (v. 23) to finally exclaim in desperation, “Wretched man that I am, who will rescue me out of this body of death?” (v. 24) thus making a convincing case for the truth of Anniken’s three prong confession. Moreover, Anniken claims that without God there is no point or meaning to it all, a point the writer of Ecclesiastes had made saying God “has made everything appropriate in its time” and “he has set eternity in their hearts, yet not in such a way that man can find out the work that God has done from the beginning even to the end” (3:11, REV). To sum up, Anniken’s heart is ready to accept salvation and she’d pray for it if she knew what words to use. However, no one needs to pray for salvation as it’s really available for anyone who takes the words of Romans 10:5-11 to heart and follows them, which apparently none of the religious people she’d dealt with had made clear lest she’d have already applied it. That “Save Us” is not just a song but Anniken’s very heart in words and notes is also evident from a very evident and almost certainly purposeful unmistakably Gospel overtones in the closing choir. And musically it’s just a fantastic track where Anniken gives the best vocal performance on the whole album to compliment her husband’s beautiful guitar solo. As a final note, it did not escape me that “Save Us” is sandwitched between the almost, shall we say, Adverserial “No Name” and the defiant “Amplified” where Anniken utters the album’s only “f bomb” and it it’s one of the primary factors which contribute to the album’s yin/yang orientation and, therefore make “Climb Out Of Hell” a thoroughly human experience, warts and all.

The album is not perfect nor is it expected to be as a debut, and, after all, few debuts are, but it’s another quality record courtesy of the renowned promoter Jon Asher and his Asher Media Relations. Every single song has an excellent and very catchy chorus and there are no fillers but to these ears, “Back Then” and “Star”, no doubt deeply personal to Anniken, are the least favorite. I would have loved more heavy hitters like the title track or “No Name” (perhaps because I’m such a Maidenhead) or “Just Walk” but I’m confident Anniken’s sequel will be even more compelling. “Climb Out Of Hell” is not just starting somewhere, Anniken, it’s a very good start.

HOUSE OF LORDS – Saints and Sinners