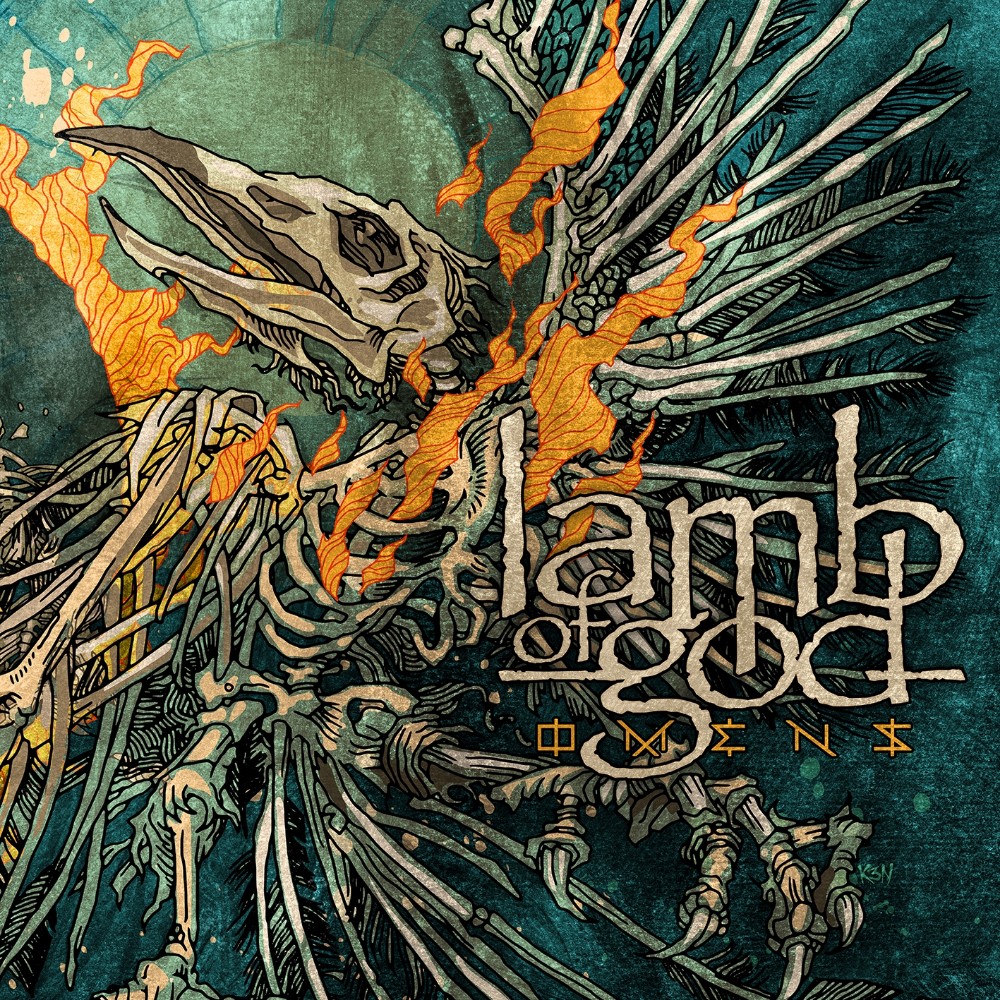 “You see all these things, don’t you? Truly I say to you, there will absolutely not be one stone on top of another left here that will not be thrown down…And you will hear wars nearby and reports of wars far away…For group will rise against group, and kingdom against kingdom, and there will be famines and earthquakes in various places. But all these things are the beginning of birth pains” (Matthew 24:2, 6-8, REV)

If there’s one band which hits the spot like Pantera (1981-2003) it’s the Virginian quitet Lamb Of God (wisely stylized with lower case: lamb of god). Not only have they maintained a very consistent line up in over 23 years (29 if you count 5 years of Burn The Priest) with the only change Christopher Adler (the founding guitarist’s William M. Adler’s brother) departing for Megadeth in 2019, replaced by Arturo “Art” Cruz, but their core sound has been very Panteric from the beginning and increasingly so through “New American Gospel”²⁰⁰⁰, “As the Palaces Burn”²⁰⁰³, “Ashes Of The Wake”²⁰⁰⁴ and, especially, “Sacrament”²⁰⁰⁶ (that last one clearly also heavily influenced by Testament’s “The Gathering”). Also, while Lamb Of God has one of the best and most cohesive guitar duos in metal, Adler with Mark Duane Morton, the de facto leader is the charismatic and controversial vocalist David Randall Blythe whom I personally hold in great esteem for his integrity regarding his conduct during his arrest and incarceration in the Czech Republic (2014) where he admirably voluntarily returned when he had had the chance to escape (which chance, needless to say, many lesser men would have taken advantage of).

To these ears the star of Lamb Of God began to flicker on “Wrath”²⁰⁰⁹ and slightly less on “Resolution”²⁰¹² which introduced more metalcore in the sound, the influence heavily explored on the post-Czech trial “VII: Sturm Und Drang”²⁰¹⁵ which also debuted Blythe’s clean vocals. Five years later, after the loss of Chris Adler, Lamb Of God decided to make their next album the eponymous the fact on which Blythe commented: “Putting our name on it is a statement. This is Lamb Of God here and now” and, if you read my review thereof (4.5/6) I concurred on one hand but also somewhat sardonically twisted that into: “Lamb Of God is not going back to its roots but rather evolves to blend with its surrounding environment” because I am such a nice guy but also because I was worried about the radio-friendly and easy listening increasingly metalcorish vibes on some of the songs.

Well, I don’t know whether they read my review or not but all that crap is gone on “Omens”. THIS is Lamb Of God we all love and enjoy, this the stuff which captured our minds and hearts from 2003-2006 (look at that cover which is also available in orange, can you say Killadelphia?) when we thought few could touch these guys. Just listen to the 2nd video single and the title track “Omens” – the brilliant lyrics, the riffs, the hooks, the variety within the song (including the Slayeric “Angel Of Death” flavor in the middle), it’s all there in spades. And Randy, well, I’m not sure whether his “f it all ignore the omens” is scolding mankind’s ignorance, speaking on behalf of the ignorant or both but he’s clearly a very spiritual dude, which is consistent with his statement in Illinois Entertainer interview on Brave Words on April 14, 2020:

“Well, I believe in a higher power, 100%. I don’t think it’s a Caucasian male in a robe with long brown hair, and I don’t think it’s a male or a female. It’s something that I, with my limited cognitive abilities, cannot comprehend or perceive. And I’m not foolish enough to think that I have any sort of answers about God — and I use that term out of convenience — because, in the entire time of man’s existence, no one has come up with the correct answer. If they had, we would know by now. And I’m not denigrating any religion, but religions are just man’s attempt to grasp the impossible, you know?”

Cool, except the same thing could be said of Max Cavalera (Soulfly, ex-Sepultura, etc.) but what makes Randy unique in his spirituality is that, as you read the lyrics and listen to the music of brilliant soon-to-be LoG classics like “Omen”, “Ill Designs”,, “Denial Mechanism” or “September Song” you can actually FEEL his heart for mankind (admittedly, a broken one), mankind which not only has lost its way but is fast tracking Biblical Apocalypse. There’s, perhaps long overdue, perception and idiomatic understanding of the name “lamb of god” (lowercase, mind you) as not just “a scapegoat” but a prophet of the Almighty. It is as if God, disgusted with the religious leaders who are too busy worshipping, glorifying and excusing some godless lawless narcissist pathetic excuse for a businessman instead of speaking out for the poor, the lonely and disadvantaged, to say nothing of showing them the way to salvation, it’s as if God instead chose average sinners who even use profanity language to speak God’s mind and will. Pair that with soul-rending guitar fills and melodies which are borderline virtuosic and the feeling is like being, forgive the inappriopriate Into Eternity reference, buried in oblivion, in the dread of almost now inevitable mankind’s self-inflicted doom with the end the likes of which we are too selfish and too self-absorbed to even focus on beginning to fathom. In other words, again, despite the, at times, abundant if always poignant profanity, “Omens” is the most Biblical album Lamb Of God has made to date. Incongruous?Well, you might want to look at the Pharasees who dismissed the testimony of the man born blind from birth who got his sight back to their own detriment because of their perception of his sinfulness (John 9).

Now, most of the tracks can rightly be described as “Far Beyond” Panteric groove with that characteristic bassy (courtesy of founding bassist John Campbell) Southern swagger and bloozy riffs, chuggy palm mutations as well as sustaining the riffs galore for probably the most bluessy LoG album to date, “Vanishing” one of the clearest examples (which also recalls If Hope Dies’ “Life In Ruin” but LoG was first, anyway) and “Ditch” being another. Basically, nothing is too fast or too fancy for the first 3 tracks so “Ditch” does take you by surpise with its thrashy beginning not unlike “Contractor” (Wrath). As soon as the title track comes around a sense of that prophetic urgency begins to intensify and culminates on the very melodic “Ill Designs”. Generally, though, this is just very good LoG we’ve learned to expect with seemingly no frills or surprises. I say this because LoG wouldn’t be LoG if didn’t have a few surprises up their sleeves.

Firstly, although some of the tracks have some metalcore guitarwork, with a notable exception of the death metal album opening riff (Nevermore) most songs feature a fast thrashy part, even if a brief one, which is a foreshadowing of the most pissed off hardcore punk thrash LoG has ever written, “Denial Mechanism” with fantastic end times lyrics regarding “whores to despotism, denial mechanisms, free market suicides, extinction level lifestyles” but Blythe says he’ll “be dead and gone long before the blade drops” so “it’s up to you, my children, to decide if this all stops” which ends with a distant “f yeah!”, a most appropriate ending if you will. Secondly, the closing epic symphonic haunting practically melodic death metal dirge “September Song”, with the lyrics presumably allusion to the unity the American People had mustered, briefly enjoyed and then promptly lost after September 11, 2001 attacks (divided here together…we’re broken in half, mindset split), reminds me of “Reclamation” (Wrath) but is something Trivium’s Matt Heafy or even Fleshgod Apocalypse would be proud to call their own work and the epic plateau is one of the most perfect ones I’ve heard in recent memory. Thirdly, on the gripe side, three songs still show signs of wear and tear: “To The Grave”, the aforementioned “Ditch” and “Grayscale”, good and with plenty to enjoy but not quite up to par with the rest.

The 9th Lamb Of God album (10th if you count Burn The Priest eponymous) “Omens” both towers above the immediate predecessor and largely returns the band to 2006, easily following “Sacrament” stylistically and creatively. The energy is through the roof, the production bests anything in the past, courtesy, again, of Josh Wilbur, and there’s an overwhelming sense of meant business, plus, compared with the eponymous, the section John Campbell/Cruz works like a charm and is now finally as deadly as intestinal gas in a shower cabin is to its careless single occupant.

Bottom line: If you liked the eponymous you’ll love this one and I have a feeling the next one will be even better. Behold Lamb Of God which exposes the sin of the world!