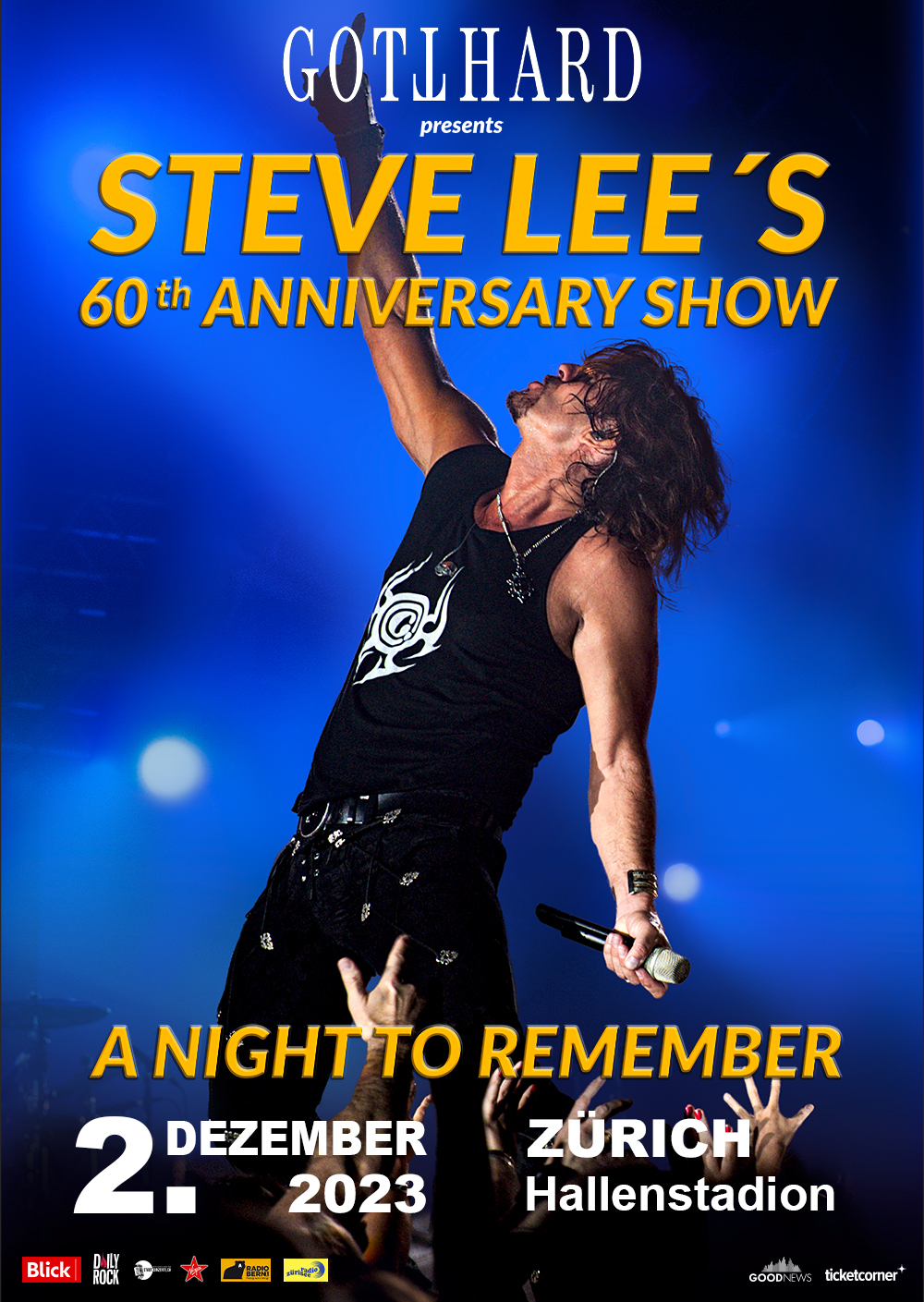 Musical history delivers unique talents, discovers one-off voices and gives artists an immortal status. But it is rare to have continuing worldwide success paired with real humanity because you need a very special character to not lose the wheel grip with all the limelight and applause.

STEVE LEE was one of these rare specimen and left the world being only 47 years old. Way too young one of the greatest Swiss rock singers died in the US in 2010 due to a motorcycle accident through no fault of one’s own.
STEVE LEE would have turned 60 years in August 2023.

„He was a wonderful human being and will be my hero forever. He was a fantastic singer and it is beyond belief that his death has a touch of triviality the way it happened“
Jon Lord

„Steve was not only a great singer and artist, he was an unbelievably nice character. His voice will stay forever and lives on in the hearts of his fans”
Klaus Meine

Born in Horgen, Switzerland, Lee first took an apprenticeship as a goldsmith but turned away to follow his great love for music and became a drummer. His voice, a whole planet fell for, was recognized quite early by his band colleague Leo Leoni: “Steve sat behind the drums and sang the Deep Purple classic ‘Child in Time’, and I realized this is a voice which can conquer the world.”
And right he was, Steve sang with high caliber musicians like Jon Lord and Montserrat Caballé, and rose to world fame with GOTTHARD. During his 18 years with GOTTHARD the band became the most successful band of Switzerland, released 16 (sixteen) No 1 records and toured the world. As headliner or as support with superstars like Deep Purple, Bryan Adams, Bon Jovi or AC/DC. One of the countless highlights of this incredible career was the legendary concert in 2005 at the Hallenstadion in Zurich: 12.000 enthusiastic fans experienced a fantastic show, captured for eternity on DVD „Made in Switzerland“. This will have a place in the heart of each fan forever and ever.

To honor the upcoming anniversary birthday, GOTTHARD wants to honor the singer, companion and unforgettable friend and get him back for one night only. STEVE LEE will be part of the band on this upcoming show at the Hallenstadion. GOTTHARD wouldn’t be where they are now: multiplatinum decorated – and also after the era Lee – with the new praised front man Nic Maeder they are still THE rock authority of Switzerland. National and international awards convoy the band, a great all time chart No 6 in Swiss album chart history and they have sold more than 3 million records.

On this special day, 2nd of December 2023, the exceptional singer STEVE LEE will be with all of the fans and the band companions with the breathtaking recording from 2005 – shown at huge LED walls and for sure, they will perform the biggest hits of their musical history. This will show once more why STEVE LEE was one of the best rock singers worldwide and that his untimely, tragic death takes him up to rock legend heaven.

“This memorial concert was for a long time a big dream but the moment was never right or didn’t feel right. After his death we were not even able to think about something like this and we were also very careful that the motive or reason behind it would not be misinterpreted. But we liked the idea that the 2005 concert would be part to celebrate his 60th birthday and it would come alive again. We knew it fits and that us and the fans could celebrate and honor him the way we wished for. The concert should illuminate his legend with the support of multimedia onstage. We’ve been with him through thick and thin and it will be something special for us as well as for fans and friends and to see him this way again on stage.”

For all who are going to participate in „ONE LIFE, ONE SOUL – A NIGHT TO REMEMBER”
60th ANNIVERSARY TRIBUTE SHOW FOR STEVE LEE, the once in a lifetime show will be a sparkling celebration of the love for a great singer and human being – and be sure that some tears will be shed……