Portuguese psych-doom metal occultists Lord of Confusion have just shared a new song off their debut album “Evil Mystery”, which is set for release on September 30th via Gruesome Records in cooperation with Morbid and Miserable Records. Titled “Witchfinder”, this new track is playing at The Obelisk whose editor JJ Koczan had this to say about the album “American ears can’t help but hear some shades of Windhand along with all that atmosphere, but Carlota Sousa‘s vocal declarations, periodic shifts into deathly growling, and organ work complementing and playing off the riffs and genuinely adding to the melodic breadth of the songs as a whole, aren’t to be understated as a factor in the overarching impression.”Listen to “Witchfinder” here.

Greatly influenced by classic horror movies and tales of the supernatural and the occult, Lord of Confusion debuted in 2019 with a self-released EP titled “Burnin’ Valley”, which garnered positive reviews and gave them the opportunity to play all over Portugal. “Evil Mystery”, is the band’s first full length album and it takes Lord Of Confusion into a whole new level of intensity and maturity, thanks to all the experience they got along the way and a lot of hard work put in developing and delivering their new release.A hell of a lot of blood, sweat, tears and thought has clearly gone into the creation of “Evil Mystery” and that’s pretty evident throughout these six new tracks. With improved songwriting skills and a proper production, the album doesn’t merely rehash that classic doom meets hammer movies formula, it shows a genuine creepy and chilling atmosphere created by psychedelia-tinged doom riffs, pounding ritualistic beats, and the haunting voice of Carlota Sousa. Pre-orders are now available at this location. If you missed it, watch the music video for leading single “Land of Mystery” at this location. 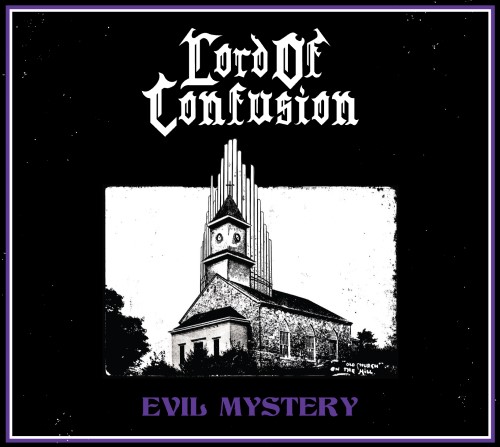