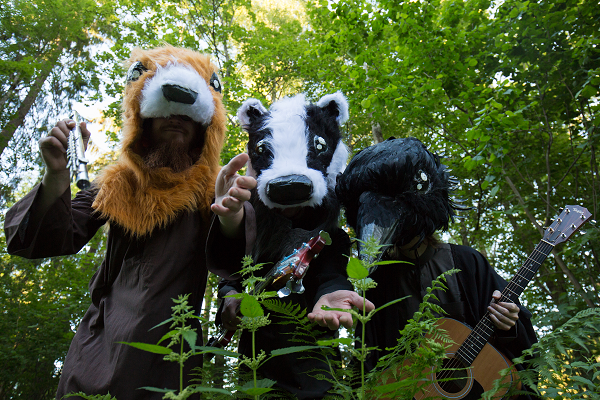 With the release of TUSMØRKE’S latest album “Intetnett”  scheduled for the 7th October, Karisma Records have today revealed a second single what will be the third album from the anarchic band that is aimed primarily at children.

Taking as its theme story of  two evil scientists who plant a self-teaching system called Intetnett onto the computers of an unsuspecting school, and which then proceeds to take control of an ant colony living in the school kitchen by using electronic impulses.   The system soon jumps from the ants, to human hosts, taking over the minds of both pupils and teachers.  Except of course, the minds of those who do not quite “fit in”, namely one of the teachers who is a technophobe, and a substitute teacher who does not yet have the necessary login info to access the computers, along with a small group of pupils.

The track chosen for the new single is a piece with an almost disco-beat  titled “Maurenes Jenka”  in which the band invite you to:

Lose yourself in the crowd and forget yourself to the enticing rhythms of the jenka dance! The ants invite you to a wonderful party game where everyone jumps in time. Get in line, this dance is easy enough for even father to join in.

You can download or stream “Maurenes Jenka”  from a number of services at https://link.karismarecords.no/Tusmorke_Maurenes-Jenka

The thing about  TUSMØRKE is that while they may aim some of their albums at children, and entertaining though those albums may be, the band also has a serious message to impart to its adult listeners. And, by introducing a fascinating mix of subjects ranging from  artificial intelligence, to advancements in technology, to the Singularity, and  Mesopotamian gods,  TUSMØRKE reminds us all of our old, long-forgotten histories.

In fact, “Intetnett” serves as a warning about the direction mankind is taking with technology, where our world is becoming a totalitarian nightmare where no one thinks for themselves, no one dreams anymore, and human culture itself is in peril. But all in not lost, because, long-ignored by humans, and consequently fading away, the old Mesopotamian Gods want to help humankind regain its freedom, and the only way to do so is by using Magic – better known as the old technology from a bygone era.

Enter our misfit heroes – the Norwegian teacher, the substitute and the children, who are given instructions on how to summon a Golem, a creature of legend that will be able to confront, and hopefully defeat,  Intetnett, thereby  pulling the plug on the dangerous computers.

Written for, and first performed at, the Aktivitetsskolen Nordstrand,  “Intetnett” is actually comprised of  two original musicals – “Intetnett” and “Når Enden er Golem” and will quite possible be the band’s final children’s release. It was recorded  at Det Ytre Rommet, Holy Space! and the Nordstrand Skole by a lineup that includes Benediktator (bass, vocals, guitars, synths, percussion, whistling), Krizla (flute, vocals, piano, synths, percussion) and HlewagastiR (drums).

With artwork by the legendary Norwegian artist Thore Hansen, “Intetnett” features a  whopping total of 21 tracks and  will be available in CD, Digital, and Limited Edition White Vinyl formats, the latter of which will come with a 12-page lyric booklet.

“Intetnett” is now available to pre-order from:

More information about TUSMØRKE can be found on the band’s Facebook page at  https://www.facebook.com/Tusmorke/