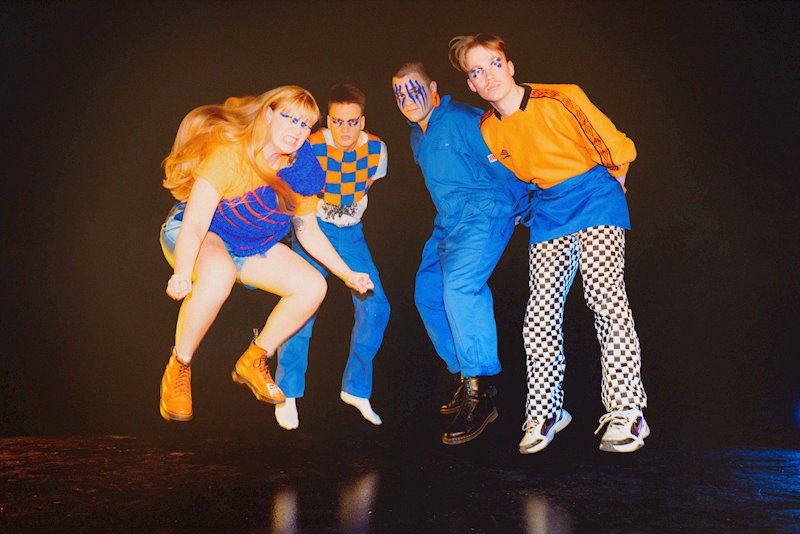 The band says: “- One of the two main goals with the record has been to push ourselves to the absolute limit. Much of the music that both we and Lasse appreciate is music that pushes itself to the point that you fear that everything will fall apart. It is this excitement and energy that we have tried to capture.

The second goal has been to create an album where the listener does not know where he has us – that the listener should not feel safe with us and the album – it should not be pleasant to listen to Aromaterapi.”

Preorder HERE
Hailing from the dark and religious south of Norway, Daufødt released their first single in 2019, and since then they’ve been breaking the speed limit. As one of the most sonically challenging and visually unique bands of their generation, Daufødt swept the floor of the underground with their debut album “1000 Island” and won the Norwegian grammy award in the ROCK category. When the band now is due to release the record number, they have chosen not to do it the easy way.
They could easily become the NEXT BIG NAME IN ROCK, but – no thanks! gotother things to do. Instead, the Daufødt-gang circled back to the underground, hooked up with Lasse Marhaug, associated Sunn0)))-member and recent producer of Jenny Hval and Thurston Moore. In the spirit of punk, they will continue to snarl and spit in your face rather than whisper the things you want to hear into your ear.

On their upcoming sophmore album “Aromaterapi”, Marhaug has challenged the band on all levels and pumped them into ABSOLUTE SONIC MAYHEM-mode, giving associations to similar noise-rock-mongers as Napalm Death, Swans, The Body and Årabrot. Likewise, the scorning lyrics of the debut that made local billionaires spam singer Annika with self-righteous messenges has been sharpened into something even more destructive and dangerous.
The band releases with the single Dagsverk/Dødsangst/Verkdags three tracks from the album.

Vocalist Annika says this about the tracks they have selected: ‘Dagsverk/Dødsangst/Verkdags is about time moving too fast and too slow, and the combination og productivity as the only road to salvation and self-isolation as a toxic trait.’

The band says:  ‘Dødsangst is the sonic representation of getting your brain thrown into a sement mixer. The sound of your brain getting thrown around all over the place, just like when life seems to chaotic and overwhelming. Dagsverk/Dødsangst/Verkdags is one part relatively controlled music and two parts chaos – like not having control, then thinking you have everything under controll before realizing you don’t understand anything.’

Dødsangst is a lot faster and more chaotic than the songs on our first album – which is the whole point of our collaboration with Lasse (Marhaug, producer) and our new album Aromaterapi.

Daufødt consists of bassist Eskild Myrvoll (Mall Girl, Kanaan, Blodkvalt), vocalist, visual artist and designer Annika Linn Verdal Homme, guitarist Eirik Albrethsen Reithaug (Blodkvalt) and drummer Mads Antonsen Gerzić, and they have quickly become a force to be reckoned with on the Norwegian rock scene. Daufødt is about both musical and physical transgression: a Daufødt show is a violent release of decibels and energy, while the music is all about tearing down both physical and figurative constructions. Half of Daufødt’s sound is firmly based in punk, while the other half is roaming around, smashing into noise rock, free improvisation and every dark corner of the underground imaginable. With the help from producer and noise-guru Lasse Marhaug they push the limits of punk music and achieve their ultimate goal: no listener should ever feel safe.
Release tour in Scandinavia:
13. oct – Bastard Bar, Tromsø
14. oct – Arktisk Kultursenter, Hammerfest
15. oct – Kooperativet, Vadsø
20. oct – Rokken, Volda
21. oct – T2, Ålesund
22. oct – Fuzzy Platebar, Molde
17. nov – BLÅ, Oslo
18. nov – Stengade, København DK
19. nov – 1000Fryd, Aalborg DK
25. nov – Kroa, Bø
26. nov – Rockeklubben, Porsgrunn
01. dec – Landmark, Bergen
02. dec – Tou Scene, Stavanger
03. dec – Vaktbua, Kristiansand
08. dec – Dama Di, Bodø
09. dec – BråK, Mo i Rana
10. dec – Verkstedhallen/Lobbyen, Trondheim

In case you missed it: watch the fantastic video for “Knekken” RIGHT HERE and grab the audio file (WAV) for airplay HERE.
The band says: “This album is cleary something else than the first album. It’s harder, faster and more violent – and made to better fit the times we live in. The first album was written in 2019, while Aromatherapi was written in 2021, when the world looked quite different. The bold creative choices we have made with Lasse are made not to be naive, but to actually be honest with ourselves and the audience about how things really are.”
The album “Aromaterapi” will be released 23rd of semptember 2022.
Credits:
Music by Daufødt
Lyrics by Annika Linn Verdal Homme
Performers:
Annika Linn Verdal Homme – vocals, guitar
Eirik Albrethsen Reithaug – guitar, feedback
Mads Antonsen Gerzić – drums
Eskild Myrvoll – bass, noise
Karl Løftingsmo Pedersen – backing vocals
Produced by Lasse Marhaug.
Recordet in Amper Tone with Kim Lillestøl.
Mix by Lasse Marhaug and master by Ruben Willem in Caliban Studio.
Coverdesign and layout by Annika Linn Verdal Homme
Photo: Brage Pedersen
Daufødt