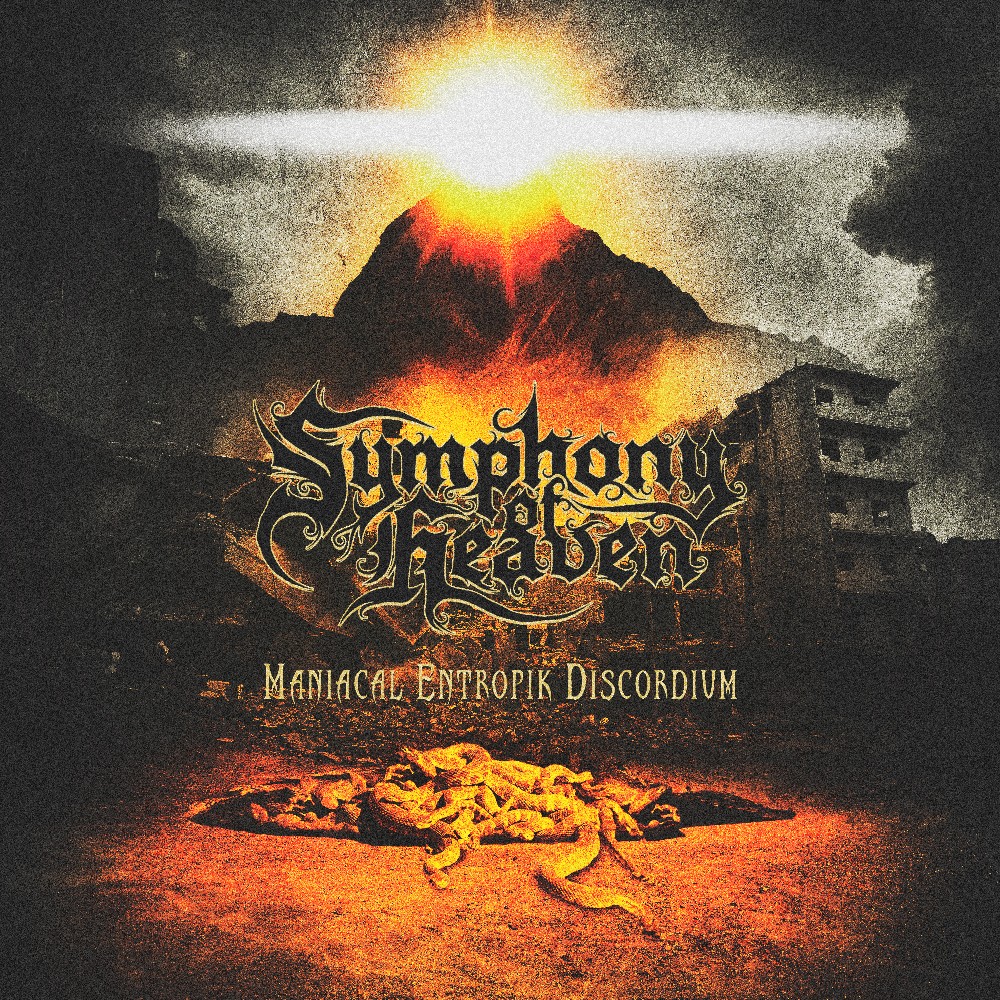 I don’t think it’s a secret that Christians can and do make excellent heavy metal music in any genre, whether you consider thrash, death, metalcore (Living Sacrifice, Demon Hunter), progressive metal (Becoming The Archetype, Extol), brutal death (Crimson Thorn) or melodic death (Immortal Souls) or even black metal (Crimson Moonlight), Heaven makes metal that’s as great as its secular or infernal equivalent. However, Indiana-based American black deathsters still took me by surprise on their sophomore (after The Season Of Death²⁰¹⁷) release, interestingly named “Maniacal Entropik Discordium”, the title recalling and possibly mocking the three word Dimmu Borgir (a band as fiercely Satanic as anti-Christian) album series such as “Spiritual Black Dimensions” or, more likely “Puritanical Euphoric Misanthropia”. However, while that is almost certainly the case here I think that musical inspiration is actually more at play, so to sum up the core influences imagine Dimmu Borgir, Enslaved, Death, Novembers Doom, Insomnium and Amon Amarth in one room but seriously waxing Biblical by the way of Killswitch Engage which makes for excellent, balanced and often progressive heavy metal music which switches gears faster than Paul Walker in “Fast And Furious”, howbeit far more thoughtfully. And to think the band used to be just one man – Logan “Pathos” Thompson who then co-opted Finnish guitarist Eero Tertsunen (of another excellent Christ-oriented extreme metal act Renascent), David “Timoratus” Napier (bass) and drummer Mason “Asaph” Beard for the creation of this album.

While Pathos is still very much in charge, the album clearly shows progress and multiple benefits of having an actual band where each musician is an essential member, so that there is no division in the body, but that the members have the same concern for one another and if one part suffers, all the parts suffer with it, or if one part is honored, all the parts rejoice with it (1 Corinthians 12:25-26). That work in union with him who powers it is shown already on probably the most complex and one of the best tracks, the opening “SoulRetch” which lyrically describes a man who, having come to the end of his own ability and simultaneous realization of the depths of his own depravity begins to…vomit his own soul in the futile attempt of saving himself from himself (a possible choice of “retch” allowing for a double meaning with “wretch”), eventually leaving it to God to deliver him, a recurring theme throughout the record.

This spiritual journey is reflected in the music: the opening riffs a late 90s Dimmu Borgir or even Cannibal Corpse followed by furious solo and soaring melody which ushers in a progressive interplay culminating in a Kilswitch Engagesque resolution and finalized in the reprised opening verses. “To Gaze Upon Destruction” strongly recalls Enslaved as well as partly Immolation when not addressing Novembers Doom’s “Into Night’s Requiem Infernal” (the acronym INRI mocking the Roman Catholic crucifixes and the Latin Iesus Nazarenus Rex Iudaeorum, Jesus The Nazarene, King Of the Jews), which makes me seriously consider that these influences are purposeful as if to disperse the darkness of these acts with the light of the Gospel. In any case, the songwriting is fantastic and when my favorite “Entropy” arrives, with its beautiful acoustic intro, I know this will only keep getting better and better, and, indeed, the old Opethian “Dead Winter Fields”, the Insomniumic “The Arch Of Time”, or the partly dissonant Deathspell Omegan “Verge Of Annihilation” (interinterestingly almost quoting In Flame’s “Square Nothing” chorus melody), none come anywhere close to disappointing, but Symphony Of Heaven ends with their finest and the most triumphant composition, the last song proper, “Obtaining Tranquility”, so epic and powerfully spiritual I can actually feel the Spirit Of God stirring within me, the track strongly recalling Fear Factory’s epic endings like “Resurrection” or “Securitron (Police State 2000)”, which technically could be the last track were it not for the almost instrumental “Amid The Righteous Oaks” where Pathos recites the wonderful prayer of Numbers 6:24-26 “Yahweh bless you and keep you, Yahweh make his face to shine on you, and be gracious to you, Yahweh lift up his face toward you, and give you peace”, words which can bless anyone at any point of their life. And then there’s the spectacular cover of Death’s “Flesh And The Power It Holds”, which was the most Biblical song Charles Michael Schuldiner has ever written, not to mention the best track on “The Sound Of Perseverance”.

With their second album “Maniacal Entropik Discordium” Symphony Of Heaven proves that heavy metal can be brilliantly and skilfully made by musicians who are neither Satanists nor atheists/agnostics and that the Almighty can get glory even from such a controversial musical genre as extreme metal without the musicians either watering the Gospel or the power of the chord-driven atmospherics. But this album is not just for the fans of Christian heavy metal because if you enjoy any of the aforementioned secular acts then this one is for you who is reading this now.