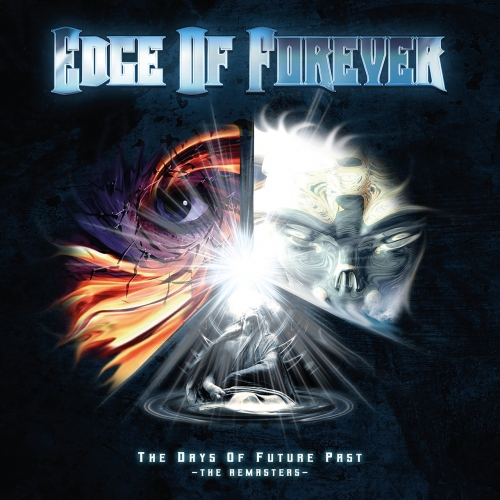 EDGE OF FOREVER – The Days of Future Past – The Remasters

This neat triple-CD set containing remastered versions of the first three records by Edge of Forever is an enjoyable listen and a pretty cool collection of well-written heavy metal/hard rock tunes with plenty of good vocal melodies, epic-sounding keyboards, and tasty riffs scattered across it. While some of their musical ideas and themes would not have been entirely out of place on Dio’s “Dream Evil” or “The Eternal Idol” (and “The Headless Cross” for that matter) by Black Sabbath, a few parts also recall Whitesnake around the time of “1987” and “Slip of the Tongue”. That probably has to do with the fact that the songs are all melodic affairs with either a big-sounding, majestic vibe to them or a more straightforward, energetic quality where the sharp and concise riffs occupy center stage. The material on all three discs is nothing if not varied and easy on the ear, and if tracks such as the atmospheric “Gates of Hell”, the blues-inspired “I Won’t be a Fool No More”, the power metal-esque “The Machine”, and the beautiful ballad “What I’ve Never Seen” do not excite you then you should probably consult the hard rock doctor. Some overwrought and forgettable cuts do crop up now and then but that primarily pertains to the third album, “Another Paradise”, which is slightly uneven and lacks the punch of “Feeding the Fire” and “Let the Demon Rock ‘n’ Roll”.

The liner notes are quite interesting and provide the listener with a decent overview of those early years. On top of that, you get three bonus tracks with “Snake Eyes” being the best of the bunch. The remastering has added more power and bombast to these recordings, and they boast more clarity and definition now. “Let the Demon Rock ‘n’ Roll” in particular has benefitted from this. While the Italian outfit’s most accomplished effort is “Seminole” (2022), “The Days of Future Past” is worth looking into and examining in more detail if melodic heavy metal appeals to you, and these albums have never sounded better than they do here.