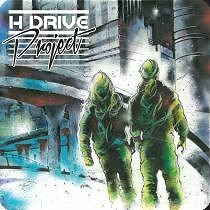 Today is the release day of the 10-inch, two tracks “Syntax Zero One” by H DRIVE PROJECT.

The project features the duo Scott Fairfax (Memoriam, As The World Dies) and Karl Willetts (Memoriam).

In 2016 we had the honour to release the very first output by the mighty Memoriam. Now, 6 years later Scott Fairfax (Memoriam, As The World Dies) and Karl Willetts (Memoriam), join forces yet again to deliver H DRIVE PROJECT.

H DRIVE PROJECT has an epic cinematic, ethereal sound driven by synth based keyboards, with touches of Scott’s heavy riffing guitars and Karl’s raw and emotional vocals.
Unbound by a singular genre, H DRIVE PROJECT merge a galactic style ambience, waves of bass and 80’s synth infusions with touches of heavy elements to explore an innovative depth of melody to their style.

On their first release H DRIVE PROJECT brings you 2 tracks with a total time clocking over 12 minutes. A massive and brutal wall of sound and very personal lyrics. Put out as a limited 10″ vinyl release with a deluxe packaging, special vinyl colours and amazing cover art.”