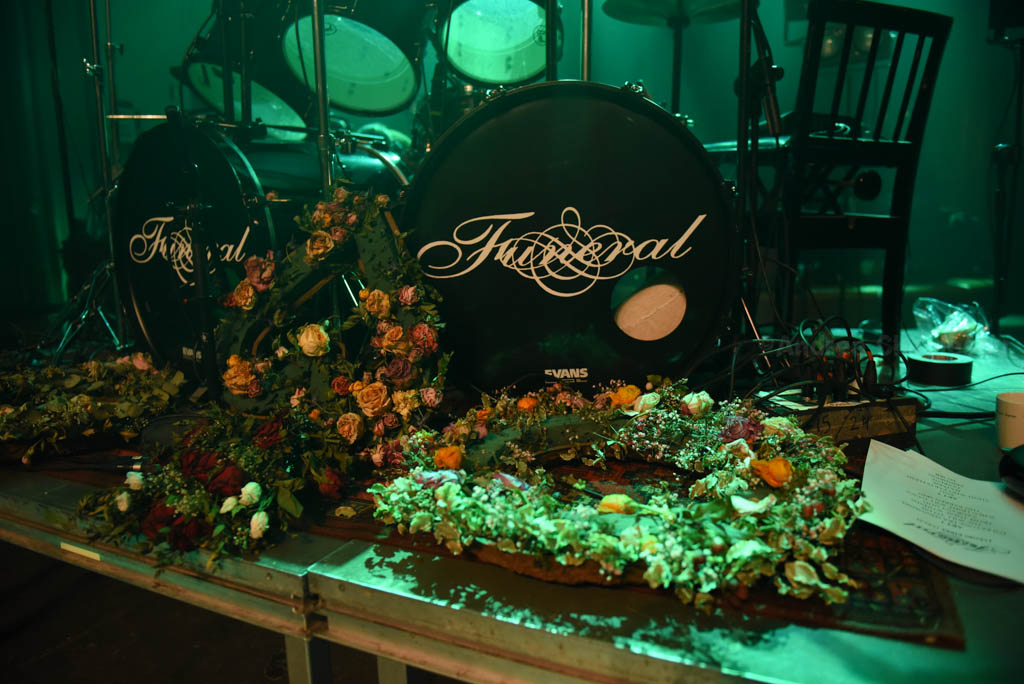 Prior to the extreme metal celebration of Easter in Oslo, we got treated to a special event on Tuesday, April 12th at Kulturkirken Jakob in Oslo: 30 years of FUNERAL, one of the pioneers of funeral doom genre, an event that offered an evening filled with musical history from the band’s career and a really magic setting in the majestic church used very often for concerts. The magic was intensified by the fact that Sareeta played violin together with the band, rearranging the gloomy tunes, and on top of that, the band had organist Milkica Radovanovic to accompany them and make sure you are in for an unforgettable experience.

The event had SUPERLYNX as the special guest act, a Norwegian trio who sets the right mood for a doom evening, by delivering their atmospheric tunes with skills and precision. Their proggy approach leads to an eerie trip into some ancient middle Eastern like world, haunted by the lovely voice of vocalist/bassist Pia Isaksen and perfectly directed by the guitar mastery of Daniel Bakken and playful drumming of Ole Teigen. I have watched them live before, but this evening was somehow more proper to get drawn into the beauty of their sound, given both the majesty of the venue and the fact that we were seated, so then you could enjoy the whole thing by leaning back and letting the sounds engulf you.

Once the equipment of Superlynx has been cleared, we got to notice the special setup for the upcoming Funeral gig, as the drumkit and the whole stage was surrounded by a big variety of wreaths, brought from an actual grave/funeral and set up so that their perfume had filled the air already, adding that notch of authenticity to the evening’s concept. But before Funeral took the stage, organist Milkica Radovanovic played a 20 minutes solo on the church organ and I can’t describe in words how thrilled I was to finally get to let those majestic sounds interact with my senses. As it wasn’t just the ears that were in heaven at those moments. The level of magic got epic proportions when Sareeta joined on stage and played her violin, together with the organ and provided the perfect prelude to the evening and to the first act of the set – ‘Folketone fra Sunnmøre’. I sadly had to shush the people sitting behind me as they were some of those who thought that the relatively silent moment was perfect for chatter. Sigh

The concert continued with a playlist divided in two acts (and a break in between), with a second part focused on songs from the band’s newest release (2021) “Praesentialis in Aeternum”. Each song resulted in loud praises from the audience, as the musicians delivered with passion and intensity and, as I said, the venue itself surely contributed to the element of doom and gloom that each song was meant to tell us about. Sadly, the video team hired for the evening had no understanding of that and I must admit I’ve never seen someone as bothersome and ignorant as they were the whole evening. I can only hope that their constant moving around and extra presence on stage, which, at least in my case, was very distracting from what the band was trying to build up to, will result in an excellent footage of the event.

Having Rob S tweaking the sound buttons was part of the recipe for success, and even if we have noticed some glitches here and there with the equipment (the violin seems to have been most affected at the beginning, but it didn’t stop Sareeta from gracefully playing her awesome custom made instrument), the overall feeling of a perfect sound and setup was achieved (ignoring the moving videographers). I am not sure if the lights were brought especially for the event or they belong to the church, but the lightshow was also a well delivered part for the evening and properly supported the anniversary event.

Act two had extra guests on stage. For the first song, “Ånd”, Lars Are Nedland (Borknagar, Solefald) joined his brother, since he also guested on the album. And Toril Snyen, who did vocals on the band’s very first album “Tragedies” joined for “Taarene”, another touching moment that evening. Ending with their amazing cover of Bjørn Eidsvåg “Eg Ser” – a song often played at funerals in Norway, and a song that seemed to have triggered the band’s recent release, I believe that the audience have been treated to a performance to remember and to charge their batteries for the crazy days that followed – for some – at Inferno festival.

We got to photograph the whole event, and bonus, we also got the chance to attend the soundcheck prior to the gig and capture some details of the stage setup. Below are the links to the three photo galleries: