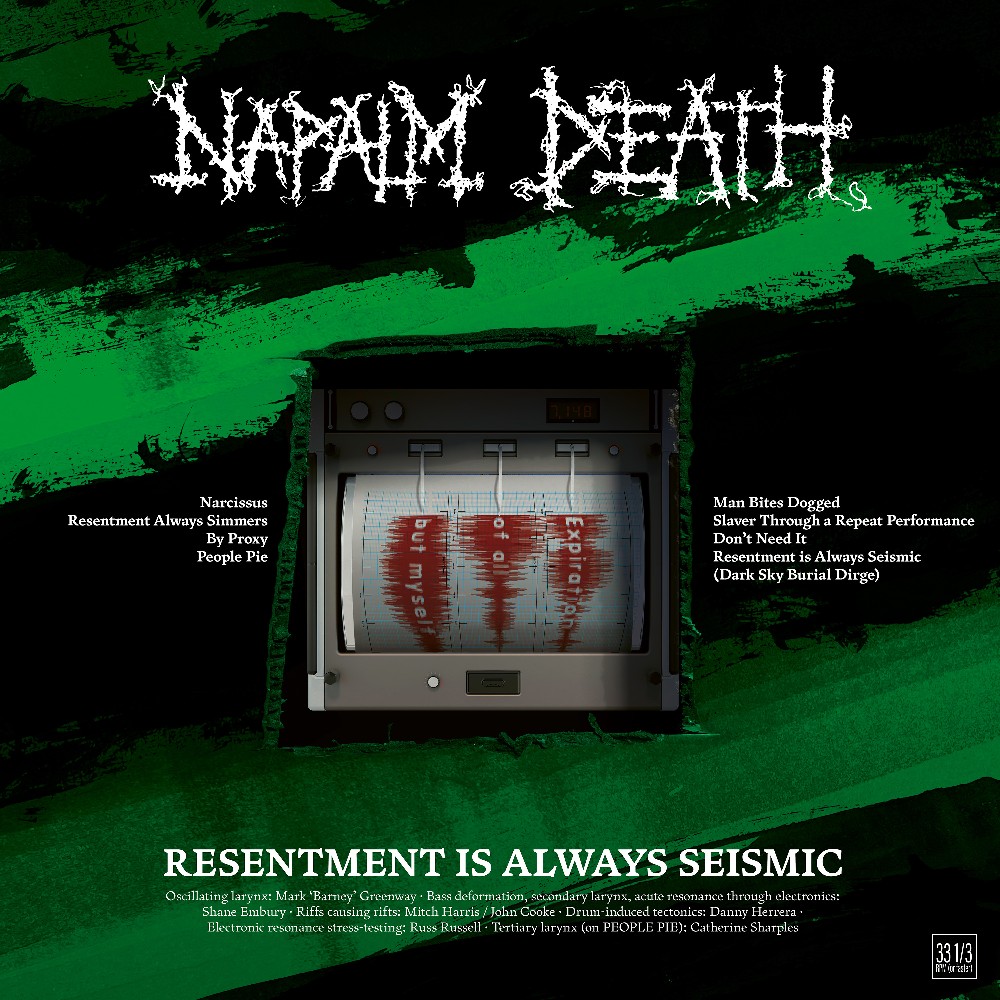 I know that Napalm Death’s last full-length, “Throes Of Joy In The Jaws Of Defeatism”²⁰²⁰ received a perfect score here and that ET was not the only mag to award it but, in my opinion, the album was not as good as the experimental predecessor, “Apex Predator -Easy Meat”²⁰¹⁵ and not even close to the personal favorite “Time Waits For No Slave”²⁰⁰⁹. Frankly, given the band’s 40 year history and 17 albums, while giving them proper due as one of the pioneers of the genre they absolutely own, I’ve grown to expect more than just the same “grindcore sometimes death metal” from this British ensemble. That’s why I found this new EP so refreshing, even though it is evidently leftover material from the “Throes Of Joy” recording session and mainly good old Napalm Death, because every one of these 8 tracks is audibly different from the other.

The title – referencing “Resentment Always Simmers” definitely leads the pack, reminiscent of Ministry’s “Filth Pig” and early Machine Heady atmospherics without losing their patented identity, but it leads in a similar industrial vein as “People Pie” which reminds me of Nailbomb and “Rude Awakening” Prong. If you want to hear classic Napalm in modern clothing check out the back to back “Man Bites Dogged” and “Slaver Through A Repeat Performance”, both very catchy, powerful and with enough variety within to warrant excited repeated applications, the kind of songwriting balance missing from “Throes Of Joy”. You can hear that Mark “Barney” Greenway (bawling, shrieking, intermittent baritone),Shane Embury (bass reverberations, barks and moans, noise-testing everyday objects) and Danny Herrera (turbulent beat throes) have lots of ideas and a clear plan to execute with a good production to boot.

Although the excellent tracks warrant a 5/6 score the album loses some of its appeal by the “Scum”¹⁹⁸⁷ days short burst of a Bad Brains cover “Don’t Need It”, the lower quality of the “Chaos AD” Sepulturic opener “Narcissus” and “By Proxy” as well as the unnecessary reprise of “Resentment” for a closer (essentially the same track defanged), with the 2nd half of the album of slightly lower quality. The summa summarum, then, results in the 4.5/6 score.

Although this EP is mostly Napalm Death we’re used to by now, the sauce in which it was cooked makes for a hopeful direction on, I’m sure soon coming, the next full-length. In short – keep up the experiments, the variety and more of those creepy near operatic clean vocals without losing the catchiness and brutality to keep these ears interested.