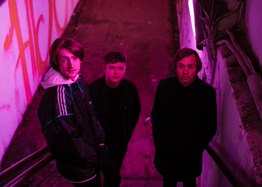 Perfectly Aware / Nothing but Gray

In 2021, we were introduced to the Oslo-based hardcore band Hammok, as they punched the air out of us, little by little, with three different singles. The tracks have recieved great coverage in magazines like Disharmoni.no, heavymetal.no, eternal-terror.com and permafros.today  The latest reeased song, How To Make Dogs Bark, got recommended by Norwegian NRK P3 Urørt. Now, Hammok rounds off their introduction project with a double single. According to themselves, their best work so far.

Earlier, Hammok has kept us waiting, releasing one song at a time. This time, they are twice as generous as usually. Perfectly Aware and Nothing but Gray are released at the same time because they fit together. They complement each other well, says drummer Ferdinand Aasheim.
Listen to the release here:

Perfectly Aware is Hammok’s shortest song to date. It effectively depicts the desperate

feeling of being painfully aware of aproblem you are in the middle of, without having any idea how to solve it. We are dragged into an aggressive drum of restlessness, before we get thrown out of it again without achieving a conclusion. A recognisable feeling of desperation and wanting to flee from the situation one is in.      While Perfectly Aware is about not understanding how to land on both feet, that’s exactly what you do in the closing track Nothing but Gray. A complex song that in the lyrics is typically Hammok, a dissatisfied sting to those who decide, but who do not do enough to get the world out of crisis. In the soundscape, on the other side, Hammok surprises us a bit more. It starts off as if Hammok went to a playground of 60’s rhythms, swing drums and rattle guitar, before they drag us into a more familiar, hard Hammok landscape in a seamless way. A refreshing song that challenges the recipe of hardcore, which can be defined as their closest genre.

Now, all that remains is to play their music for an audience. Something that the last year hasn’t contained much of. It’s difficult to be a band without being able to play for an audience, Hammok says restlessly. Now they want to show who Hammok is and share what they have to say in a proper way. Something we look forward to.