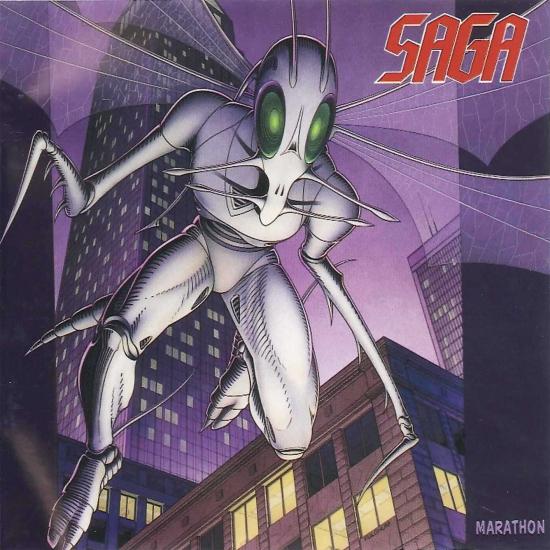 “Marathon” by the musically gifted Canadians known as Saga was released nearly twenty years ago and it is therefore quite brilliant that the band have had a large bulk of their old releases remastered and reissued via earMUSIC lately, including this one that originally saw the light of day in 2003.

As with the other remastered versions in the series, the liner notes are interesting, and the layout and artwork look great. The thing about “Marathon” is that it feels a little brighter and more uplifting than its two predecessors, perhaps even a little more lightweight in terms of its atmosphere, but it is just as eclectic and charming as “Full Circle” and “House of Cards” are albeit not as remarkable as the latter. The contrasts are not as prominent here as earlier and I would not have minded a few darker touches and brooding soundscapes now and again, but still, this stuff is startlingly original in the sense that there is no other act out there that sounds like Saga. The mix is balanced and there is plenty of room for the members of the band to shine, which again ties in with this 2021 edition coming across as nicely dynamic. While “How Are You?” and “You Know I Know (Chapter 12)” are incredibly catchy and “Breathing Lessons” is beautiful and soothing, the real highlights are the grand-sounding rockers in the shape of “Streets of Gold (Chapter 14)”, “Return to Forever”, “Too Deep”, and “Worlds Apart (Chapter 16)” – all of which are crackling with energy. The guitars are more upfront and crunchier now thanks to the remastering and one could make the argument that the LP is quite heavy by Saga standards but, as I said before, also positive and sparkling in terms of its aura.

“Marathon” is arguably one of the most immediately accessible entries in the Saga discography and there are plenty of good prog rock tunes be found here for you to get excited about.