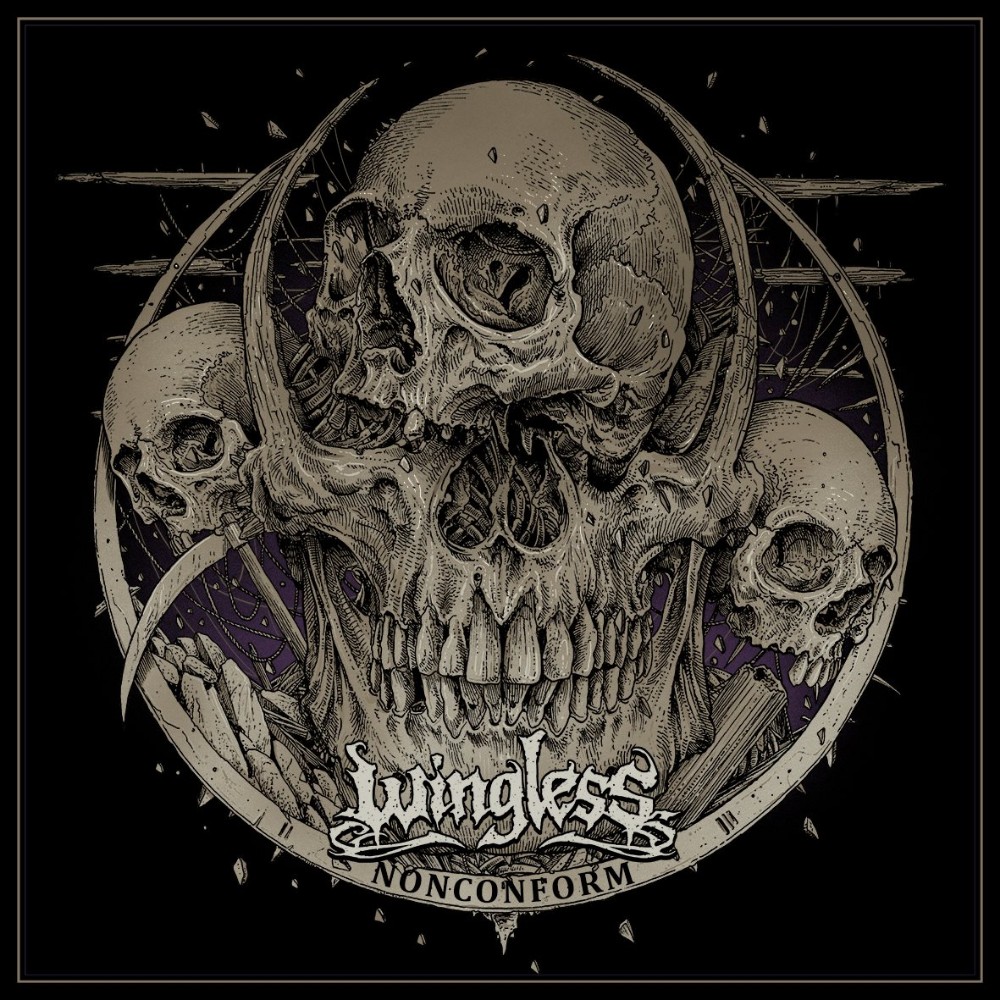 It’s about time I have heard from my native Poland death metal scene (where I currently reside) which boasts the likes of Behemoth, Azarath and Vader, to mention just the most excellent ones. The occassion is the doom/death trio Wingless who have recently released their fourth , after “Hatred Is Purity”²⁰¹⁴, “The Blaze Within”²⁰¹⁶ and “Triada”²⁰¹⁸, full-length “Noncomform” with a new vocalist Redemptor’s Michał “Xaay” Loranc to compliment Grzegorz Luzar (guitar, bass) along with new coming (that is, since 2018) drummer Piotr Wójcik. Whereas the previous albums had some metalcore influences, perhaps because of former vocalist Forgotten Souls and Cemetery Of Scream frontman Olaf Różański, “Noncomform” is just pure doom/death in the vein of Malevolent Creation and old Peaceville (Anathema, My Dying Bride, Paradise Lost) without quite the brilliant song structures and melodies while most akin to November’s Doom (complete with Loranc’s Paul Cuhr’s-like growling anunciation), various pacing and few great tracks among mostly good ones.W

What they don’t bring in originality they make up for in songwriting and that as soon as you press play, the “A Fine Art Of Murder Malevolent Creationary opener “Imperceptible” with a Middle Eastern twist, the most well-rounded cut dedicated to Alistair Crowley’s “do what thou willt shall be the whole of the law”, like a summary of what you’ll hear for the next 42 and some minutes and 9 tracks. “Separated from All Life” is good but nothing to make you go “hmmm that’s a rocking good death metal” and so for a couple of tracks until the second half and the outstanding and very catchy “Drowning In Sadness” followed by the heartrending title track but, in all, we’re mostly listening to “Into Night’s Requiem Infernal” Novembers Doom with a Polish cast which is the main reason for the score.

“Noncomform” may not have blown me away but it is a solid record one can listen from start to finish without skipping any tracks while Wingless’ knack for crafting memorable riffs and melodies bodes well for future releases plus the album is really well recorded. It will be some time before you can place their albums in the same stack as Behemoth’s or Azarath’s works but “Noncomform” is definitely one the Polish death doomers can and should be proud of. Dobra robota, panowie!