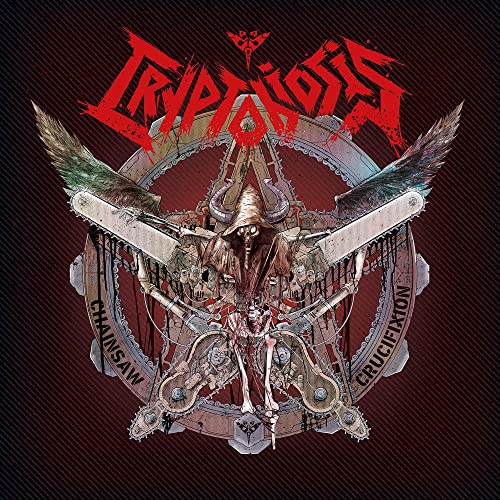 The German squadron known as Cryptobiosis deliver sharp, punishing death metal with a good melodic flair to it and this 12-track effort of theirs named “Chainsaw Crucifixion” is some pretty enjoyable stuff thanks in large part to the strong riffs and the utterly aggressive vocals that are all over the record. To some extent, the album is somewhat old-school in tone and style, yet it sounds neither dated nor like a mere rehashing of tired ideas. This is all about crafting malevolent and memorable songs with efficient hooks to them and I think these skilled dudes have succeeded in doing exactly that. The disc is also sufficiently packed with twists and turns that add a touch of surprise and unpredictability to the proceedings, and the dark (and arguably slightly murky) production fits quite nicely with this raging and brutal slab of underground metal. The blistering guitar leads are decent too, which is exemplified by the storm of madness that is “NecrObese”, and I must say that I dig the horror-filled aura of sick hymns ala “Slowly Mutilated”, the epic “Celestial Noise”, and the groovy “CoVoid-19”. Did I mention that there are prominent overtones of thrash metal to be found here too? They fit in rather well and add a cool 80s touch to the lethal cuts.

If gory death metal with heaps of energy to it turns you on, then make sure you add this one to either your playlist or want list. A few passages do come across as a little too muffled and lack power due to the production, but those instances are very few and in the overall perspective we are dealing with a potent death metal cocktail that contains enthusiasm in spades. At 37 minutes long it never outstays it welcome either. Recommended.