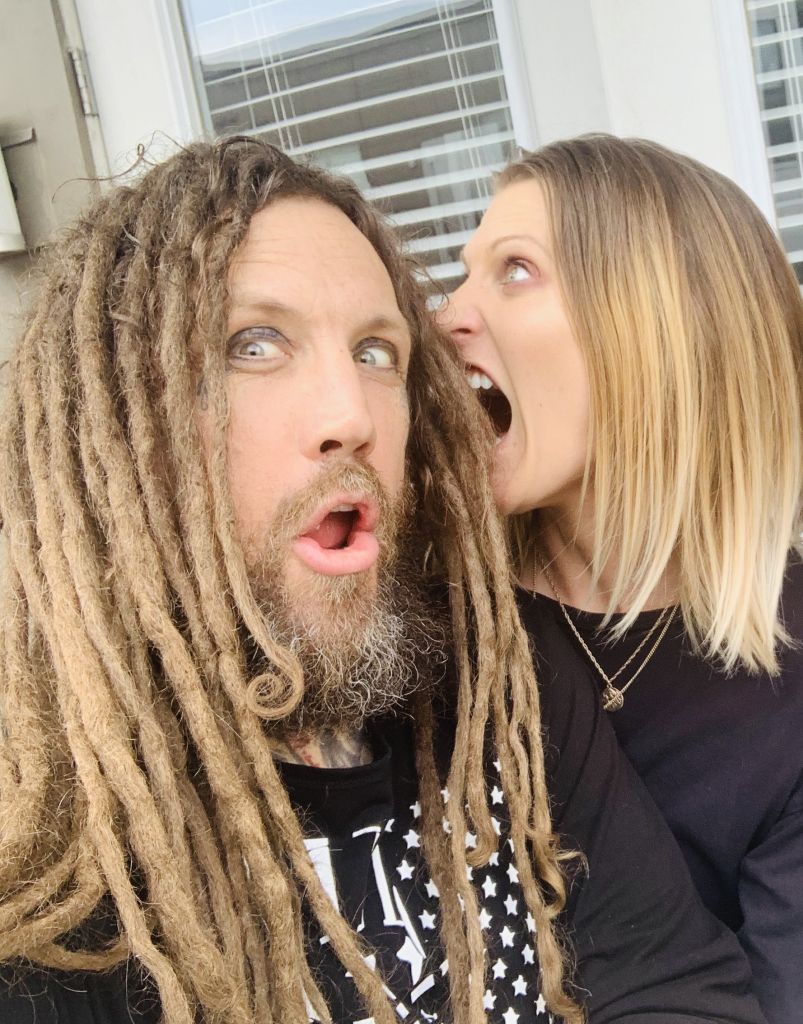 Brian “Head” Welch & Esjay Jones, courtesy of We Are PIGS

Featuring each artist in caricature, the video – like the song – aims to bring attention to the challenges faced by today’s young generation and lets them know they are not alone.

See the powerful video (animated by Dave the Creator):

While it can be challenging growing up in current times, We Are PIGS, Brian "Head" Welch and JR Bareis want kids to know that there is always hope. As Welch told Metal Hammer about the new art piece, "For youth today, the world can be a particularly dark place, filled with many temptations. But there is always help available if one reaches for it, as the red balloon symbolizes in the video."

The song was produced, engineered, co-written and co-sung by Esjay Jones, the mastermind behind We Are Pigs, and was originally inspired by the HBO show "Euphoria" and its raw portrayal of sex, drugs, identity, social media and the difficulties of navigating life as a teenager. Similar to the show, Jones, Welch and Bareis wanted the music video to be uncomfortable and thought provoking.

As Jones has said, "I spoke to Brian about the concept – initially thinking the message was, the ‘kids AREN’T alright,’ but as we started working together, we wanted to spread positivity, hope and purpose to youth with our words, and ‘kids are alright’ became the mantra."

To further that message, part of the proceeds from the sale of "Kids" will be donated to organizations We Are Moving The Needle and The Whosoevers Movement aimed at uplifting, empowering and providing education and purpose for today’s youth. Find the track here: https://onerpm.link/kids

Says The Whosoevers Movement, "Our generation today faces many more distractions and problems than ever before. Drug abuse, depression, broken families, self-harm and suicide are just a few of the issues they have to overcome." We Are PIGS hopes to provide a beacon of light with "Kids" and encourages fans to check out and support these organizations as well.

We Are PIGS is Esjay Jones‘ alt metal hybrid project characterized with a pig-masked front woman that combines brutal riffs, brazen screams and ethereal melodies with strong lyrical messages. After debuting with a cover of Slipknot’s "Duality" (featuring Alien Ant Farm’s Terry Corso) in 2020, followed by original single "Pulse Queen" in early 2021, We Are PIGS has found an incredible following and support through playlist placements on Spotify, Amazon Music and Apple Music.

Recent releases have included "MOOT" featuring KITTIE’s Morgan Lander and "Blood Diamond," a collaboration with M.O.B. In addition, Jones has worked behind the scenes as a sought-after producer for acts including Grey Daze (Chester Bennington) and a soon-to-be-released collaboration with Billy Corgan.

About We Are PIGS/Esjay Jones

We Are PIGS is the alt metal hybrid with brutal riffs, brazen screams and ethereal melodies created by South African born producer/songwriter/artist Esjay Jones. In the summer of 2020, We Are PIGS made its debut with a cover of Slipknot’s "Duality" and the first original single "Pulse Queen" followed at the tail end of the year that has boasted 15 additions to editorial playlists between Spotify, Amazon Music and Apple Music. Esjay Jones has been highlighted recently by the Recording Academy as well as recognized for solely producing the much-anticipated second LP for Grey Daze (Chester Bennington’s first band), matching his vocals with collaborations from Dave Navarro, Richard Patrick (Filter) and Bennington’s 9-year-old twin daughters, Lila and Lilly. Esjay has also worked with Sean Kingston, Jeffree Star, Olivia Holt, Escape The Fate, Mystery Skulls with Nile Rodgers and Brandy, Chester Rushing (Stranger Things), Alien Ant Farm, and many others. Esjay has had over a decade of success in the music industry: during the first part, she cemented herself as one of South Africa’s top rock vocalists fronting Durban-based band Stealing Love Jones. The band achieved mainstream success with four #1 Singles, as well as sharing the stage with major international acts like One Republic, Fall Out Boy, Violent Femmes, Seether, Jimmy Eat World, and many more.