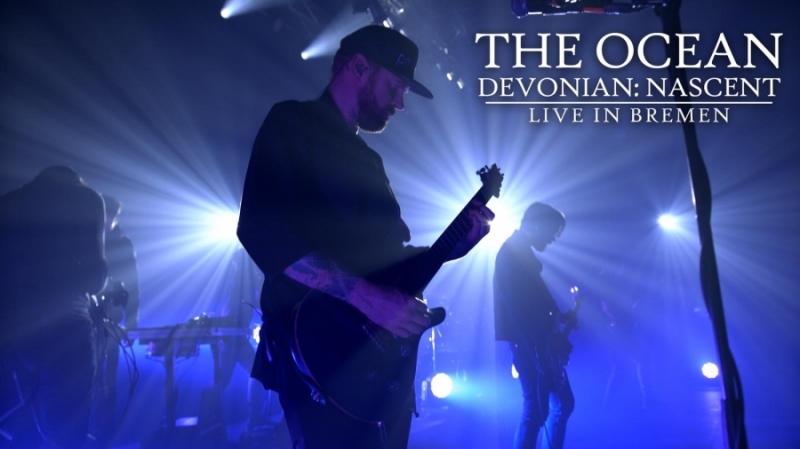 Berlin-based progressive metal act The Ocean present an unusual live album. One that is a testimony of strange times: their Phanerozoic concept album performed live in its entirety at a time when no shows were happening anywhere in the World.

On September 25, 2020, in the middle of the global pandemic, The Ocean released their 9th studio album Phanerozoic II, the concluding episode of a conceptual trilogy that began with Precambrian 13 years before – and even without any touring to support the new album release, Phanerozoic II entered the official German album charts at #9. With no end of lockdowns in sight, the band decided to thank their fans for the support with two streaming concerts, performing both Phanerozoic albums in their entirety: Phanerozoic I was streamed live from Pier 2, a big hall in the port of Bremen, on March 25, 2021. With more than 1.500 tickets sold, it was the most successful show of the popular "Club 100" streaming events series thus far. The day after this event, the band retreated to synth player and sound designer Peter Voigtmann’s rural studio "Die Mühle", just outside of Bremen. Here, the band rehearsed and recorded Phanerozoic II in its entirety during the following three days. The performance aired on April 16 as part of the digital edition of Roadburn Festival, this year abtly named Roadburn Redux. Both shows couldn’t have been more different: where the first part boasts with a pompous, mesmerizing lighting production on a big stage, the 2nd part is quite the opposite: intimate, almost cosy, focused on musicianship rather than performance. A stripped down setup in a dark barn, with moody, minimal but not any less efficient lighting. "We wanted to give people two totally different experiences", says band leader Robin Staps. "In Bremen, we had the chance to record a proper Ocean live show, the way people know us. We played facing towards the front of the stage, to an invisible crowd, essentially to a huge empty room… but we knew people were watching, even if we didn’t see them. There was the same rush of adrenaline right before going on stage as you get before going on at any big open air festival… maybe with a little extra anxiety added, because knowing that so many people are watching you without being able to see them yourself was super weird.

Despite these surreal circumstances, The Ocean‘s performance in Bremen felt like a real live show, for everyone watching: the energy spilled over to thousands of people from all over the world watching from their homes, who clotted the band’s instagram story with hundreds of shares and comments. The crazy response was another testimony to how much we were all missing live music at this time: to watch a band connect with their crowd at home in this very intense way was an experience that was oddly beautiful and frustrating in equal measure. After this special and invigorating experience, it was clear that the 2nd part had to be intentionally different. "We wanted to do something more cinematic visually, and at the same time more intimate, we wanted to capture the feeling of the 6 of us in a relatively small, confined space, facing each other, in a circle… without the crowd playing any role or being any part of this equation", says Staps. "It was March and the room that we spent the whole day in was cold, but that was part of the vibe. We had to warm up our fingers constantly." Much like the first part, the band performed the album live, all together in one room, several times during one long day. The best take was chosen, then mixed by long term live sound engineer Chris Edrich. Dana Schecter (Swans, Insect Ark) created animations of the iconic "collision" motive of the Phanerozoic II album art, specifically for the premiere at Roadburn Festival 2 weeks later, where it aired on Friday night as the highlight and headlining act of the band’s own Pelagic Records showcase. The logistics and preparations for these two events were as challenging as one can imagine: bass player Mattias Hägerstrand flew in from Stockholm and had to quarantine in Berlin before rehearsals. None of the band members (or anyone their age group, for that matter) was vaxxed at that time, and before the Bremen event the entire band and crew were tested outside of the venue, before anyone was allowed to enter. Masks had to be worn at all times until show start, even during soundcheck. Phanerozoic Live is a live album like no other – it is a live album that was recorded in a cultural vacuum, a bizarre time that we will remember for the rest of our lives: a time when the world as we knew it suddenly stopped spinning. It is a live album that does without all the qualities that we usually appreciate about a live album: without the sounds of a cheering, exited crowd. But it is the very absence of this, it is the eerie silence between the songs that reminds us of what we miss most, and that gives these recordings a rare intensity and power.