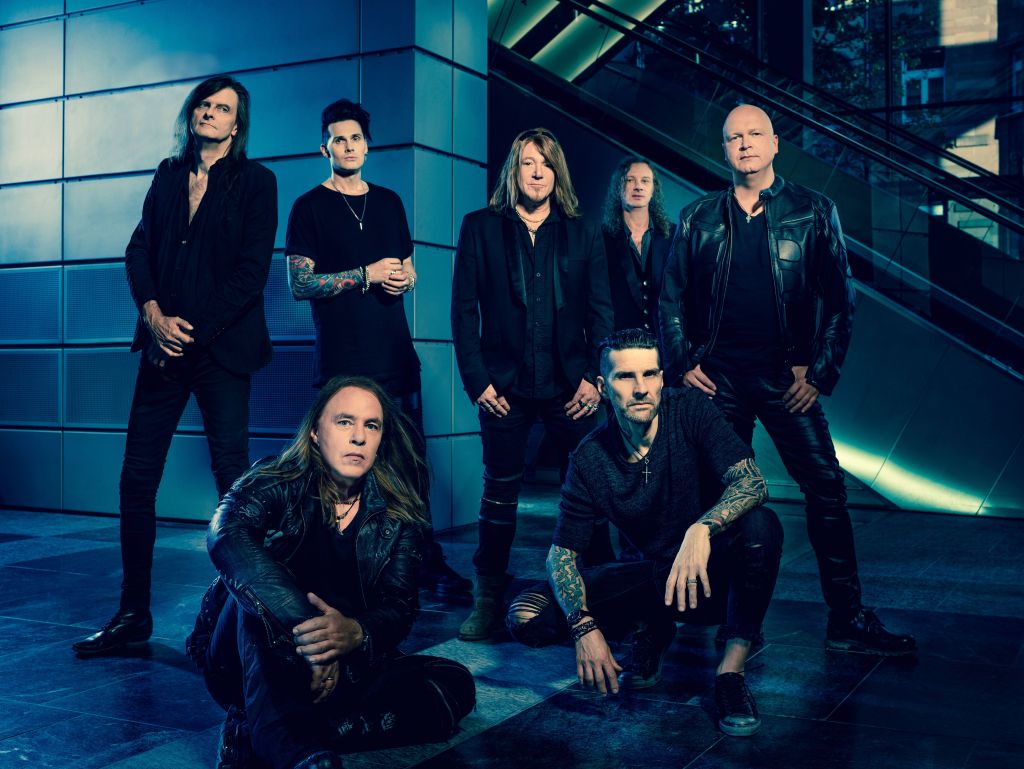 HELLOWEEN release their new, second single "FEAR OF THE FALLEN" along with an amazing lyric video clip, created by Carlos & David of theeasyrabbit.com. The song is a fast paced, melodic track done the way only Deris can do it. "I had so much fun not only writing a song for my voice, but also for Michi, one of the greatest singers out there. I always have an extremely broad smile on my face when I hear him singing my melodies", says Deris and Kiske adds: "The whole process, including the spirit, was just ideal. If I had the feeling that one of the parts would not be really fitting, I asked Andi if he would sing it and vice versa. There was no competition whatsoever – what counted was what is best for the respective song. I am thankful to be (again) a part of this crazy family. I love them all".

Get the song digitally here: https://bfan.link/helloween

»Please stick together!« This was the ardent wish of thousands of fans calling out to Andi Deris, Michael Kiske, Michael Weikath, Kai Hansen, Markus Grosskopf, Sascha Gerstner and Dani Löble during the PUMPKINS UNITED WORLD TOUR – and their dream has come true! With the upcoming album, simply titled HELLOWEEN, the band opens a new chapter after 35 years of a glorious career. The future of one of the most influential German metal bands from now on will feature three singers. Originally planned for the live performances only, it was the birth of a unique seven piece metal alliance.

Dani Löble: "This record is the coronation of the PUMPKINS UNITED journey! Still today I am fascinated by the different character traits and facets of the HELLOWEEN history. As an example I’d like to point out the legendary voices of Michi, Andi and Kai. To enjoy them now together on one record, under one flag is the ultimate HELLOWEEN experience". It is therefore not surprising that the first single  SKYFALL, a 12 minute epos written by Kai Hansen, has the long yearned "Keeper-vibe" – even if the long player can by no means be limited to it. SKYFALL implies the musical arch which will be loved by fans of every era. This first album of a new age is taking the fans from unforgettable memories of the fifteen studio records and four live CD’s to new adventures.

Along with massive album tracks such as HELLOWEEN classic and album opener "OUT FOR THE GLORY", the epic "DOWN IN THE DUMPS", both written by Weikath, the power metal shouter "MASS POLLUTION" by Deris and Grosskopf’s scuff proof rocker "INDESTRUCTIBLE" (which could be an analogy towards the unbreakable career of the band), the album release is flanked by the ‘party-track‘ of the record, "BEST TIME". Lyrically the song by Sascha Gerstner reminds of the good old days, musically it´s convincing with confident HELLOWEEN style guitar harmonies and a chorus that stays in your long-term memory after hearing it for the first time. With "ANGELS", a no less powerful song of his comes into view, bursting with joy in playing: "Synergy, energy & creativity! These were the main elements on this record. We used old school recording engineering from the 80’s merged with the current HELLOWEEN-vibe and here we are: more than 35 years of heavy metal experience on one record!" adds Gerstner. Besides the line-up and the unique interaction of world class front men – this is what makes the album outstanding: it is a precise time travel through all phases of the band’s history, going back to the roots but at the same time at the speed of light towards the future. "HELLOWEEN" offers a complete metal universe within 12 songs.

The base of this milestone album was already erected in the studio: using the original drum kit of Ingo Schwichtenberg, the recording was done with the same modulators at the Hamburg HOME studios where back then "Master Of The Rings", "The Time Of The Oath" and "Better Than Raw" were recorded. Completely analog and under the eyes of long term producer Charlie Bauerfeind and co-producer Dennis Ward, the UNITED impact travelled to New York and got the final mix in the Valhalla Studios of Ronald Prent (Iron Maiden, Def Leppard, Rammstein). "After 30 years with the different line ups of the band I really thought I was well prepared for another extreme challenge, but I was wrong! My expectations were highly exceeded in every way with this super-sized creativity package" tells us Bauerfeind. Dennis Ward adds: "HELLOWEEN is an institution with only one goal: making music. Not only for themselves, but for the fans as well. When we started mixing we realized that we had a record that covers the whole spectrum of the band and every one of us gave 110% for it. It was an honor to finally work with Charlie and I am grateful to the band that I became a part of their history!"

Besides all musical competence, it is also the special enthusiasm that defines HELLOWEEN. Michael Weikath characterizes in his own way: "It is the incomprehensible encounter of seven musicians who are working as friends and even family and created something that no one would have thought it could be possible. It is like awaking from a sleep but still being in an incredible dream". Returnee Kai Hansen reflects: "Being in the studio with my old companions after 30 years was very emotional for me. But at the same time it was a completely different experience with the ‘new‘ boys. The collaboration of different songwriters and strong characters made the album very special: a unique mix with reminiscences from all chapters of the band’s history. HELLOWEEN is a big part of my life and I am looking forward to celebrating the songs live for and with our fans"! From another perspective Markus Grosskopf agrees: "For me, being one of the last "survivors" who played every note from the beginning, it was a fantastic experience and a very emotional process. I think everyone can hear it on this album. I love it".

When it came to capturing the larger-than-life emotions in the artwork, it quickly became clear that it was only possible as a handmade painting on which the important topics of the band’s history are processed. The work of Berlin based artist Eliran Kantor has achieved this and visually underscores the fact that the band cherishes all parts of their history.
"HELLOWEEN" will be released on June 18th, 2021 as 2CD-Digibook, 1CD-Jewelcase, 2LP-2CD Earbook and as an elaborate Deluxe-Boxset incl. Earbook, a Helloween-wall clock, pins, necklace, patch and an art print of the cover. Available digitally as well as on vinyl with a 2LP Gatefold-version in different colors and picture disc. For all collectors HELLOWEEN offers a limited spectacular 3LP-Hologramm vinyl.

With all this brand new material an album has been created, an album that is set apart from the digital mainstream and showing the essence of the band was never more solid. This is the beginning of something big – here comes HELLOWEEN!

Single 1: Vinyl, CD, digital:
‘Skyfall’ (single edit) + ‘Skyfall’ (exclusive alternative vocals mix). Both are exclusive single versions and will not be on the album. Around 20 minutes playing time.

Order the singles here in the format of your choice: http://nblast.de/Helloween-Skyfall

What is worth waiting for:
UNITED FORCES TOUR 2022 It was already foreseeable: Due to the pandemic, the originally for April/May scheduled HELLOWEEN European tour has to be postponed again. However, this is no reason to hang your head, even more so now: it is getting even more powerful in 2022!
We all have to stick together to stand and endure this agonizing live music gap and because extraordinary circumstances require extraordinary measures, HELLOWEEN invited their friends from HAMMERFALL to join them on their European tour in order to create a tremendous metal-package together. The UNITED FORCES TOUR 2022 called alliance is not only the full HELLOWEEN experience, on top the fans will enjoy fine Swedish steel out of the HAMMERFALL forge. Both bands will have brand-new albums in their luggage and the European fans will be able to listen to the new songs live for the very first time on the UNITED FORCES TOUR 2022. The long-awaited end of the dry spell is in sight – coming with a double dose in March, April and May 2022 as we have to catch up two years of METALPARTY to get cured from a lot of withdrawal symptoms!

Andi Deris: "We are ‘hammered’ to have our friends from HAMMERFALL with us on tour! Back in 2002 the band produced their album "Crimson Thunder" in my studio in Tenerife and we had a lot of fun back then." This mega-package is delivering the appropriate metal-spectacle to enter the stage with full power! Oscar Dronjak can hardly wait: "We are so ridiculously excited about this! Not only do we get to go out on tour again after two looooooooong years of stage draught, but we get to do it with a band that we love and was a great inspiration to us in forming HAMMERFALL in the first place. The UNITED FORCES TOUR will be something truly special, you can count on that! "

For the dry run up front, HELLOWEEN is releasing their fantastic new album and with the unification of their three vocalists Kiske, Deris & Hansen the album reminiscences to all eras of the band’s history. This already is a sensation in itself, but also HAMMERFALL is ready to release a brand-new record before the tour starts. A great forerunner to get warmed up for the double load of live power with the ultimate UNITED FORCES TOUR 2022. And whoever misses the just announced dates was probably never infected by the metal virus …