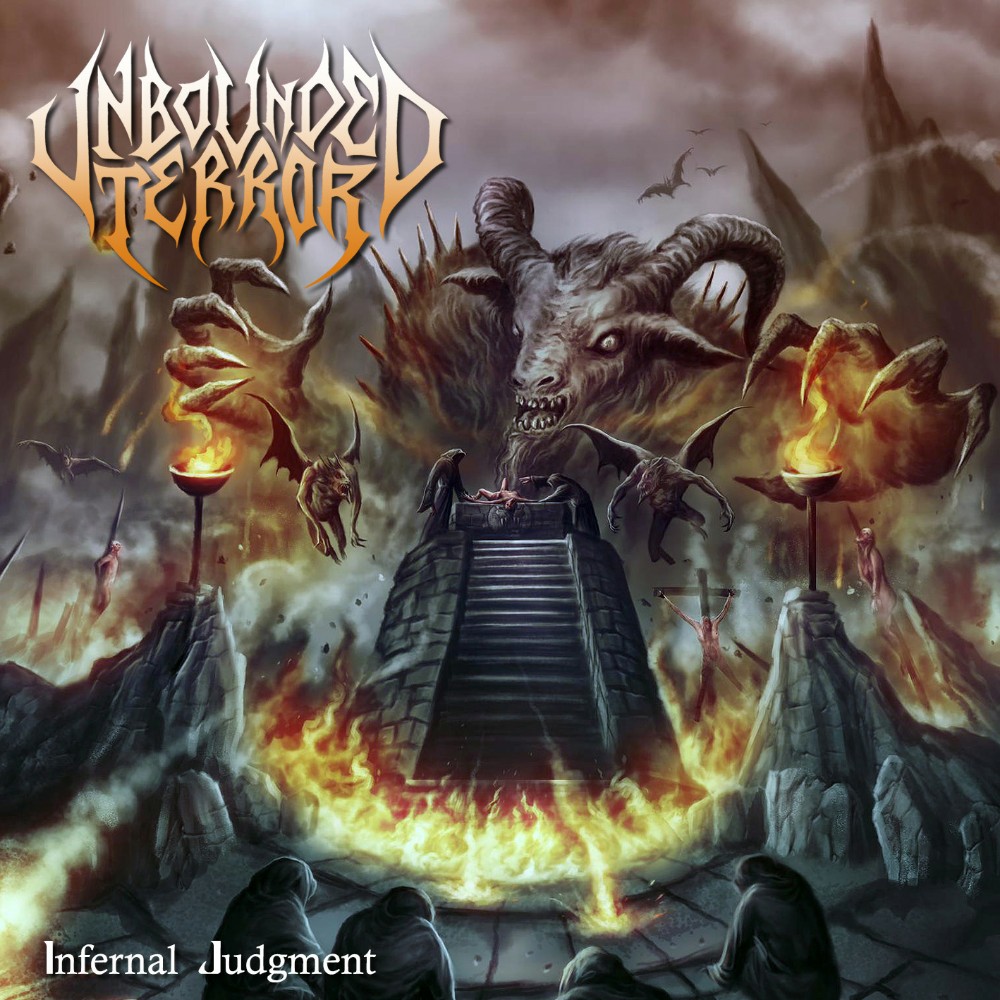 Sometimes a band’s debut album achieves a cult status, especially, if that band breaks up shortly thereafter only to later reunite with a different lineup, inluding a new vocalist. Such is the case with Spanish old school death/doom act, Unbounded Terror and their "Nest Of Affliction" (1992) album, recorded with Antonio Pereida (guitars, vocals). The new vocalist (and bassist) of the reunited lineup, Andrew Spinosa, appeared to have big shoes to fill even after the 2nd album, "Faith In Chaos" (2020), so the band came up with a plan: record a compilation with 4 redone tracks from the 1992 debut, 3 live tracks from the 2020 follow up, and 1 brand new cut to sweeten up the deal, thus "Infernal Judgment". In my view, a clever plan which works for the most part, especially the new track.

The ensemble wasn’t always called Unbounded Terror, having started as Putrefact Monstruosity in 1990 before morphing into that which yielded "Sarcastic Souls" demo (1991) and the aforementioned "Nest Of Affliction" only to cease fire in 1993. Reunited in 2019 with founding guitarist Vicente Javier Payá Galindo and the aforementioned Spinosa on vocals and bass, they grabbed Juan Mateu for the 2nd guitar and Jaume Porta behind the drum kit. Of note is a fact that Payá, Spinosa and Mateu (just live) are also members of another Spanish death/doom act, Golgotha, which you will about here again soon enough.

Generally, it must be said that the live tracks are just good old death metal without cause for high blood pressure. They are all deserving 4/6 rating, very similar in structure to the point that none deserve a special mentioning here. The album is interesting for the first 5 tracks, of which the stellar opener is such a death metal "hit" neither HYPOCRISY nor PARADISE LOST would throw it away from their next album song set (btw. any time now, Hypocrisy), especially since its infectious chorus melody is perfectly complimented by the more technical early IMMOLATIONary slash and burn, Spinosa’s vocals so Ross Dolan you’d think the two were separated by birth. The way the 2nd track, the ASPHYXian "Dreamlord" naturally follows it as if were a brand new track also is as remarkable as itself but the even doomier "Fear" is much better, perhaps because the consistent Immolation influence points to "Failures For Gods" (1999) one of my favorite albums of the latter. "Slaves Of Sufferage" (mind you, originally recorded in 1992) strangely reminds me of CHIMAIRA’s "Resurrection" (2006), but the last studio and the oldest track, "Sarcastic Souls" is the biggest surprise, combining DEATH’s "Leprosy" (1988), MORBID ANGEL’s "Blessed Are The Sick" (1991) with…MASTODON? Overall, the studio tracks deserve a solid 5/6, which, combined with the 4/6 for live tracks, gives 4.5/6.

If the purpose of this compilation had been to reaffirm Andrew Spinosa as a vocalist as good as Antonio Pereida the mission was well accomplished. The old tracks sound as good as the old ones if not better. However, the clearly inferior quality of the 2020 live material shows that Unbounded Terror has to do a lot better next than "Faith In Chaos". Thankfully, the more melodic direction of the brand new track, "Infernal Judgment", doubtless, the best song on this record, bodes very well for the next studio effort, whetting our appetites for it. Let us patiently await it whilst spinning "Infernal Judgment".