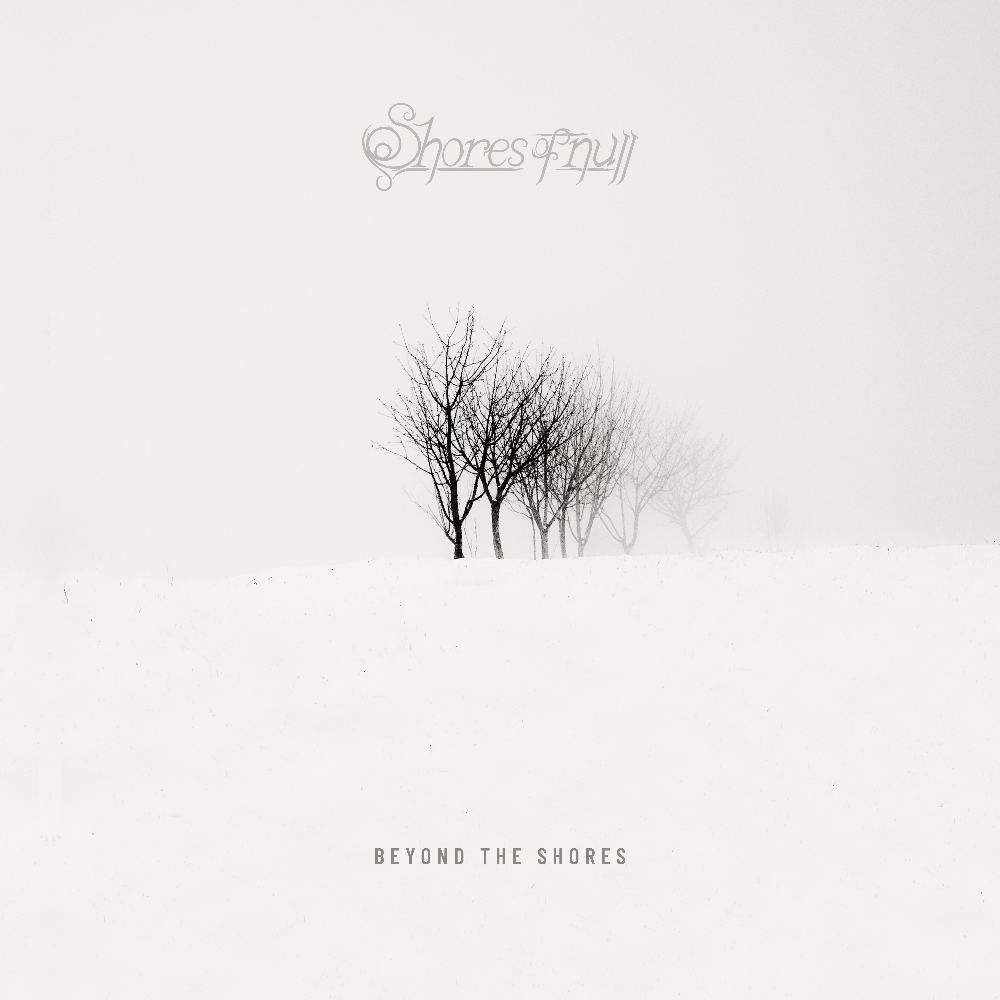 SHORES OF NULL – Beyond The Shores (On Death And Dying)

As the brewing storm closes in gentle, very MY DYING BRIDE violins usher in a heavy doomy riff SWALLOW THE SUN and KATATONIA both would be proud to own, the characteristic melody and Davide Straccione’s clean vocal similar to Aaron Stainthorpe’s of My Dying Bride but more dramatic and DEPRESSED, then Swallow The Sun’s Mikko Kotamäki’s growl invites a very low end suitable for the question "Why me, God?" as the mood changes into faster old OPETH bringing in DENIAL expressed by cleanly sung melodic death courtesy of the dual guitars of Gabriele Giaccari and Raffaele Colace, with multiple clean and screaming vocals including SATURNUS’ Thomas Akim Grønbæk Jensen’s and again, slower doomy Opeth with underlying melody accentuated by the universal truth: LIFE IS AT WAR WITH US, which perfectly suits more My Dying Bride melodic flashbacks and coming back to slower doom, doomier and doomier reminiscence of IN MOURNING, then a "Discouraged Ones" Katatonian melody (which may be a favorite) another gorgeous slow In Mourning melody (wait, THAT is a favorite!) a fitting prelude to Straccione’s male-female duo with Inno’s Elisabetta Marchetti "on the brink of eternity" (I want this at my funeral!), sudden STOP.

Improvisation, proggy noodling without drums then My Dying Bride rhythm rides "the waves as the cold wind blows" the duo repeated, piano injection, asking "where’s God?", BARGAINING "will you give me some more time?", back to "Discouraged Ones" but "pain will guide me home" so "no more ANGER" with almost alternative melodies, then – a frightening banshee screech, growls match the unnerving dissonance as if someone attempted to play violin on a guitar, now melodiscism recalls DESCEND INTO DESPAIR, growls in concert with cleans, proggy interplay a’la Opeth with the brillant section, bassist Matteo Capozucca and drummer Emiliano Cantiano, for life is still at war with us but with slightly different background riff, again the violin guitar but without growls, a faster very My Dying Bride death with different growls then cleans (more moments like these!), a new melody without reference but well expressing ACCEPTANCE with "I am ready to move on" and "I’ve come to terms with my own fate" again "violin" guitar with growls, "cold wind blows" with Marchetti and Straccione in concert once more, finally concluding now, with the same doom as if in reverse (Benjamin Button?), soon it will be just violin but no, storm cuts off the music and recedes Slayer’s "Reign In Blood" style emphasizing Marco "Cinghio" Mastrobuono’s (Fleshgod Apocalypse) immaculate production until it finally vanishes into the calm of the dying storm, ending another tale of the five stages of grief formulated by the Swiss American psychiatrist Elisabeth Kübler-Ross and hereby re-enacted in 34:24 minutes of musical poetry in motion.

In my view, an arist, a band who can pull off an interesting progressive over 30 minute 1 song album deserves highest accolades for with it he or she or it shows the ability to do anything musically they put their minds and hands to as both Shores Of Null’s preceding albums, "Quiescence" (2014) and "Black Drapes For Tomorrow" (2017) have already abundantly proven. I admire both Edge Of Sanity’s "Crimson" (1994) and Insomnium’s "Winter’s Gate" (2011) and I admire this Spanish act for "Beyond The Shores (On Death And Dying)" as well. I love the repetition of the best moments which mimics our repetitive recycling through all 5 stages of grief and the album is, doubtless, excellent, creative, perfectly executed and massively sounding.

However, (blame it on the reality of every grief which is never elegant) I don’t find it as coherent and smooth as either "Crimson" or "Winter’s Gate", both of which it has a lot in common with. While the melodic, catchy side of this 34:24 minute song-album is impeccably fantastic, I feel that the extreme and the deathly has not been given enough space to breathe, except for that unnerving brilliant violin-guitar dissonant part, and besides, I am referring to the fast death of which there is just one part. Additionally, when it gets slow it tends to drag a little bit too long before moving on to the not always so smooth transitions. Having said that, I equally feel it would be unjust to take away more than 1 point from the score and 1 point is significant enough to both show the importance of the perceived flaw as well as the fact that it does not spoil the listening experience.

A worthy follow up to both predecessors, "Beyond The Shores" is a brilliant if flawed album from another band who proves there’s nothing they can’t do musically. Do not let my criticism distract you for I immensely enjoyed it and I highly recommend it to any metalhead.