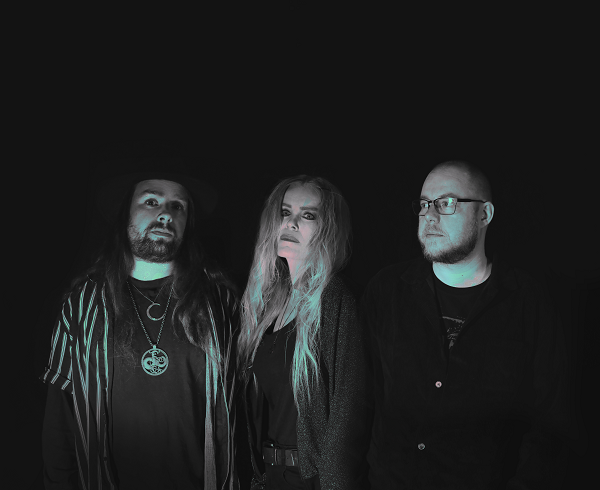 Norway’s SUPERLYNX are very clear about what music means to them when they quote Jimi Hendrix who described his own music thus: “We call our music ‘electric church music’. Because it’s like a religion to us.”  And that, according to the band,  is much like how they feel about theirs:

In music we find so much of what people seek in temples, religions or other spiritual forms – strength to endure trials, peace of mind, ecstasy, safety, hope, community, joy, transcendence etc. In the process of writing our third album this truth only became clearer to us. Music is our temple”.

Now, with their third full-length album, “Electric Temple”,  due out on Dark Essence Records on the 16th April, the band have today released a second track from the album.  Titled “Apocalypse, and with artwork for the single by Pia Isaksen, the track can be downloaded or streamed from a variety of services at:

Accompanying the release of the “Apocalypse” single, SUPERLYNX have also made available a new lyric video which can be seen below

Providing fans with an insight into the thoughts that went into “Apocalypse” the band explained:

It is no secret that we feel nature deeply. Apocalypse captures a panic-like state of mind – internally but also of nature and all creatures affected by the fact that the planet is burning. A lasting but culminating panic raised by the enormous and increasingly devastating fires that have been going on, especially during the last years, in the Amazon Forest, in California and Australia. So much wildlife and so many species lost make a very apocalyptic image. We are really affected by it, and one sleepless night of not being able to stop thinking about each individual creature´s fear in the (then) ongoing Australian bush fires the lyrics were written.

There is both a sadness and a stressed feeling to the song. We always try to stay positive and focus on hope and light, but it was hard with this one. With that being said, there are forces working to turn this devastating development around, and we just have to wish that we can.

For SUPERLYNX’s lineup of Pia Isaksen on  Bass and Vocals,  Daniel Bakken on  Guitars and Ole Teigen on Drums, piano, keys and vocals, “Electric Temple” is both a continuation on from  their previous album “New Moon” and a further development of moods that the band has not previously explored Poignantly, “Electric Temple” also bears a deeply felt  mark left by the tragic death of a close family member.

Recorded and produced by Ole Teigen in his studio Crowtown Recordings, and with album artwork by Pia Isaksen and band photo by Carl Eek, “Electric Temple” will be available in CD,  Digital and Vinyl formats, and can be pre-ordered from the following:

Tracklisting for “Electric Temple” is as follows: