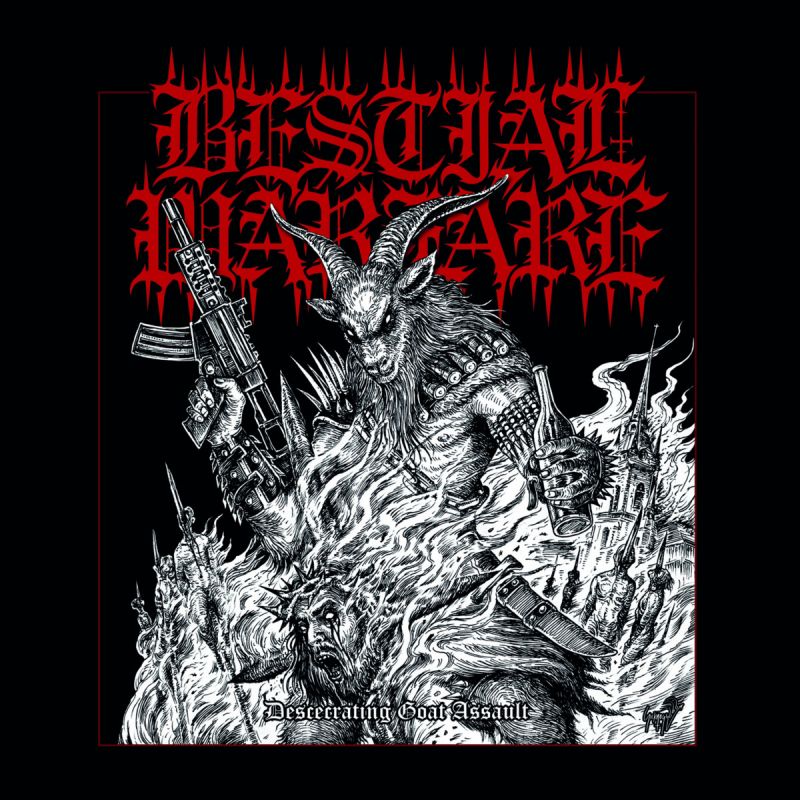 The German sickos Bestial Warfare churn out raw and fierce black/death metal from the vilest pit of the hellish underground and this upcoming 5-track EP of theirs is as insane as they come. The sound and style of this cursed thing is not altogether that different to what acts such as Blasphemy, Conqueror, Impiety, Revenge, and Black Witchery dabble in, but ”Desecrating Goat Assault” contains a number of slower, morbid-sounding passages and its fair share of dynamics to keep it interesting throughout, and I find this one much cooler than many stylistically similar releases and albums out there.

Sure, it is relentlessly aggressive and dark as fuck, but it is also a rumbling and rather catchy output that certainly kept me entertained from beginning to end. There is not a shred of originality or musical innovation to be discovered here, but I reckon that is beside the point as these fuckers clearly just want to pulverize your body, smash your face in, and burn your apartment down while performing blackened death metal with nihilistic undertones to it…and they do that in style and with a prominent sense of confidence too. The highlights of the EP are arguably ”Iron Bloodlust Inflamed” thanks to its overwhelming amount of intensity and the twisted “Antichrist Offensive”.

If you have had a particularly crappy day at work or if your spoiled children have been driving you crazy all week, I seriously suggest that you give these five malevolent and sinister compositions a number of spins and let them numb your senses for a little while. I dig this one!

IRON MAIDEN – Nights of the Dead, Legacy of the Beast: Live in Mexico City