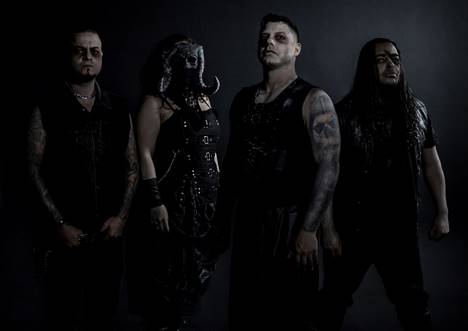 “Nahemah’s Possesion” starts with strings and choir elements just before these Brazilians go crazy in a way similar to Cradle Of Filth. Once again Paradise In Flames sound incredibly evil, and remind of symphonic metal masters Dimmu Borgir, too. There are many details added to the fiery, gritty black metal sound of “Nahema’s Possesion” which create a cold, gloomy and sombre feeling. The orchestral passages within this song create tension and build up to epic culminance. There are subtle choirs in the background of Paradise In Flames’ heavy metal riffings that soon transcends into diabolical blast beats. The band states: “The song is about a terrifying story, an urban legend that talks about the possession of Nahemah in bodies of beautiful maidens that causes unsolved murders. This is the third single from our album “Devil’s Collection”, out on Oct 16.”

Born in the footsteps of Sepultura and Sarcofago, Paradise In Flames always aimed to become a big name in the metal scene of Minas Gerais, Brazil. With their third full- length record coming up this fall, mixed and mastered by the danish producer Tue Madsen (Messugah, Dark Tranquillity), the band is finally on its way to establish themselves internationally.

With the release of their first hit in 2003, Empire in Ashes, the band became the talk of the town in the Metal scene of Minas Gerais. The following year, extreme Brazilian metallers released their EP titled Devil From the S ky, and the band quicky got on major concert stages and venues in Brazil. In 2005, the band kicked off their first national tour, inludcing performances at the Ceará state festival, For Chaos.

The first album, Homo Morbus Est, double and single CD, was released in 2006 and distributed by Democratic Records Brazil, together with MDR Records in Portugal, with over three thousand copies printed. In 2007 they set off on its largest tour with more than 30 dates throughout 15 states around Brazil, joining the band Krisiun as special guests.

The second album, Labirinto de Metáforas, was released in 2013 on all digital platforms and was surrounded by a complex, dense theme which immensely pleased the media. Roadie Crew Magazine (BR) stated that the band "presents a diversified, symphonic black death with intelligent lyrics and great compositions", while Whiplash Mag (BR) wrote that "the band abuses their music, knowing it is versatile and creative within its stylistic structures, but at the same time, we feel a pulsating life of its own…".

Devil’s Collection – tracklist:
1. Nahemah’s Possesion
2. I’m Sure Your Gods Have Seen This Before
3. Satan’s Laws
4. It’s All Wrong
5. Has Never Seen A World Without Wars
6. The Tepes
7. Ripping Off False Masks
8. Hell’s Now
9. Devil From The Sky (bonus track)
10. No Life On Earth