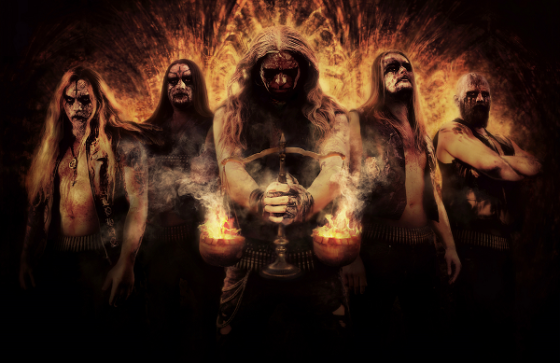 Norwegian Black Metallers ENDEZZMA, who have just inked a two-album deal with Dark Essence Records, recently  managed to recover some lost tapes with material from a video shoot filmed shortly after the release of the band’s 2017 album "The Arcane Abyss" .  As the band explains:

With the new upcoming album soon to be dropped by Dark Essence records,  ENDEZZMA is about to enter a brand new era which will include new epic,  professionally  shot videos which will also be released soon in all their monumental glory.  However,  we wanted to close "The Arcane Abyss" chapter with a Nekro old school video that expresses the wild energy within the band. That album was such a fierce and rabid ride for us and it feels good to add a video production to it.

The track we used for the video is  "Serpent Earth" and, at a time of plague and disease where live rituals are strictly limited, we decided to dig up the lost tapes and hand them over to the talented music video director Guilherme Henriques for an exclusive edit, and he has produced a gloomy , intense and pitch- black manifestation.

The video is a dedicated to the old school black metal souls out there , lets burn the night with rabid force and malevolent hunger. THIS IS STELLAR DARKNESS…WE ARE ENDEZZMA… "

The video for "Serpent Earth" can be seen below and at https://youtu.be/Va_OX3DnSJw

Formed in 2006 by frontman M. Shax, ENDEZZMA’s original lineup featured URGEHAL’s late, and much lamented, Trondr Nefas.  The duo, joined by other, experienced Norwegian musicians, quickly established a die-hard following, impressed by the band’s live appearances, which were imbued with  morbid overtones and an undercurrent of barely-suppressed viciousness.   "Alone", ENDEZZMA’s aptly named first release,  cemented the band’s reputation as a force to be reckoned with. A band that went its own way, regardless of what others thought, or were doing.

The debut full-length "Erotik Nekrosis" appeared in 2012, and proved that ENDEZZMA was a band well-able to weave an old school atmosphere into  eerie, seductive, modern compositions, and produce  an album full of necro requiems.    It also marked the death of Trondr Nefas, which left  a vacuum within the band.  A  vacuum that was eventually filled by guitarist M. Malphas, which allowed ENDEZZMA to go on to explore mystical dark fields with their sophomore full-length "Arcane Abyss".

Aside from Shax on vocals and Malphas on guitars, ENDEZZMA’s lineup includes Nihil on Rythm Guitar,  Skriu on  Drums and Aske on  Bass  –  a group of experienced musicians, hungry to bring their brand of brutal, fiercely intense, and yet aesthetically mystical approach, to Dark Essence Records, a label they know will understand where they are coming from, and where they want to go.

More information about the upcoming album, which will be ENDEZZMA’s third full-length release, will be announced shortly, and the band recently had this to say about it:

Together with Dark Essence we intend to meet the high expectations that have been placed on us, and come out with an album of extremely strong material that will take fans into a mystical world of stellar darkness filled with mythical outcasts and characters.

More information about ENDEZZMA can be found on the band’s Facebook page at https://www.facebook.com/endezzma/

The official video  for the track "Junkyard Oblivion" from ENDEZZMA’s "Erotik Nekrosis" album can be seen below on the band’s YouTube channel at http://youtu.be/NZtQ9xPZF5U