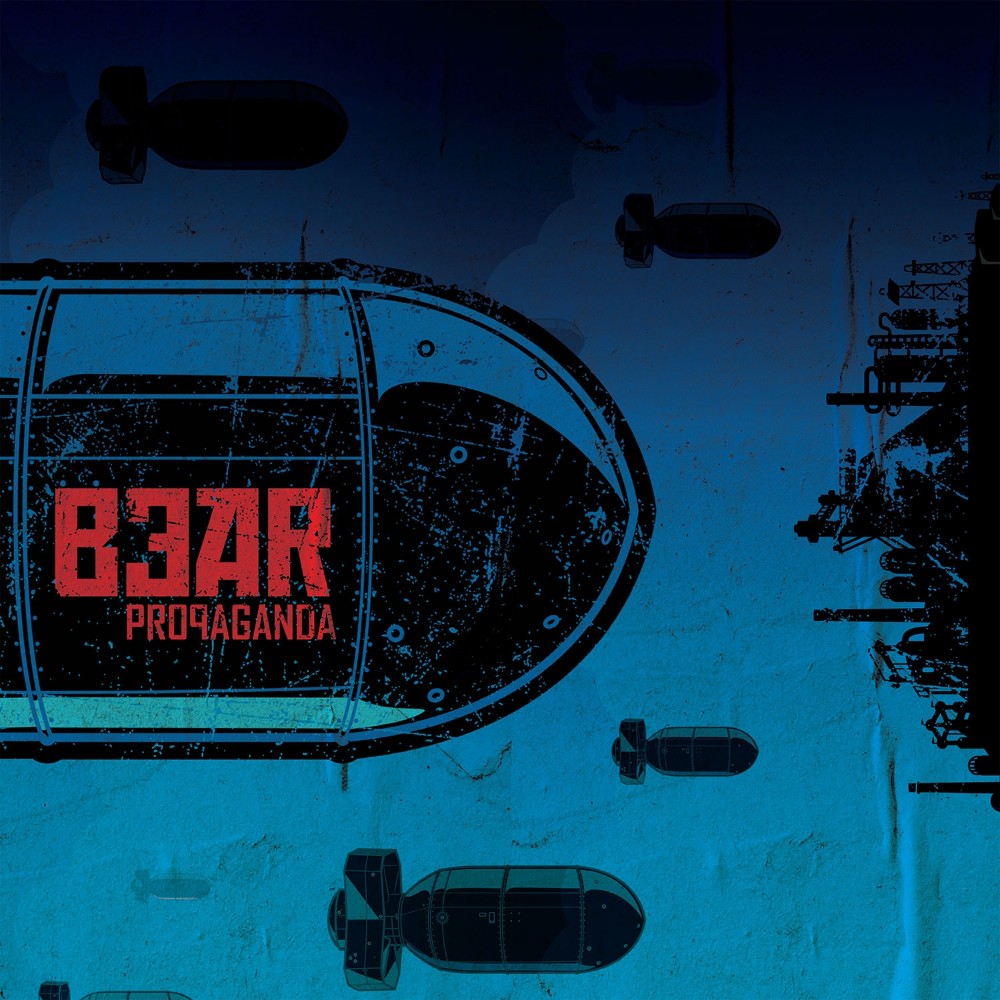 Looking at the cover of the Belgian progressive hardcore/metallers’ 4th full length I wonder which meaning of the word "bear" do they associate their band’s name with: the carrying of loads or the wild animal, although, if the musical content is any indication, it’s probably both and therein is the ingenious simplicity of the moniker. James Falck, Maarten Albrechts, Serch Carriere and Dries Verhaert (with no known instrumental assignments) have been BEAR-ing through the Belgian Antwerp hardcore/metal scene since 2010, BEAR-ing 1 EP (Abstractions, 2010/2011) and 3 LPs – "Doradus" (2011), "Noumenon" (2013) and "///" (2017), before, this here, "Propaganda".

Propaganda. The subject isn’t new in either hardcore or metal and the latter association immediately recalls the sixth track from Sepultura’s profusely seminal "Chaos A.D." album, and, it is no surprise that BEAR’s title track BEARs resemblance to that. But BEAR’s propaganda is, in the end, of their own making, even if it uses someone else’s ingredients in its own recipe, indeed, a propaganda to counter all other propaganda, that state mandated propaganda and that commercial corporate propaganda they call advertisement and which we all know is subliminal brain washing. That is what BEAR BEARs their weapons against. The aforementioned title track, my favorite, has some serious Tool-ish/Meshuggah-ic rhythm and bass with vocal lines recalling early Life Of Agony (before Keith Caputo’s sex change to Mina). Another highlight, the punkish "Flares" would not be out of place on Fear Factory’s "Obsolete" while the opener, "Dissolve Dissipate" has overtones of Killing Joke and Darkane to boot, the clean vocals a medley of Jeremy "Jaz" Coleman, Andreas Sydow, respectively, as well as Fear Factory’s Burton Christopher Bell. BEAR BEARs resemblance to both Slipknot and Mastodon with "Imprint" Vision Of Disorder" on the excellent "Obey", and the strongly hardcore-ish closer "Kuma" deserves, too, a special mention, in terms of hooks, melody and power.

It’s too bad BEAR doesn’t maintain this quality throughout the album. As soon as "Obey" ends, "Propaganda" meanders, ebbs and flows in hardly catchy manner, technical and powerful but only sometimes interesting until the very good and effective Soulfly and Mastodon-ish "Stigmata" with it’s speech and "WE WON’T BACK DOWN" chants, indeed, signaling the turn for a better direction, since it precedes the instrumental "The Ram", after which there comes the aforementioned "Flares" and then not too shabby Prong-ian "Engine" which is followed by the closer. But tracks "Apollo’s Heist" through "Gutter Love" are "Propaganda" Achilles heel.

While BEAR’s 4th album is full of interesting ideas and excellent tracks it is grossly uneven and appears to lose focus and direction in its middle. Check it out, still, because this album definitely needs to be heard for its fierce originality, but expect to be disappointed precisely where I have been.