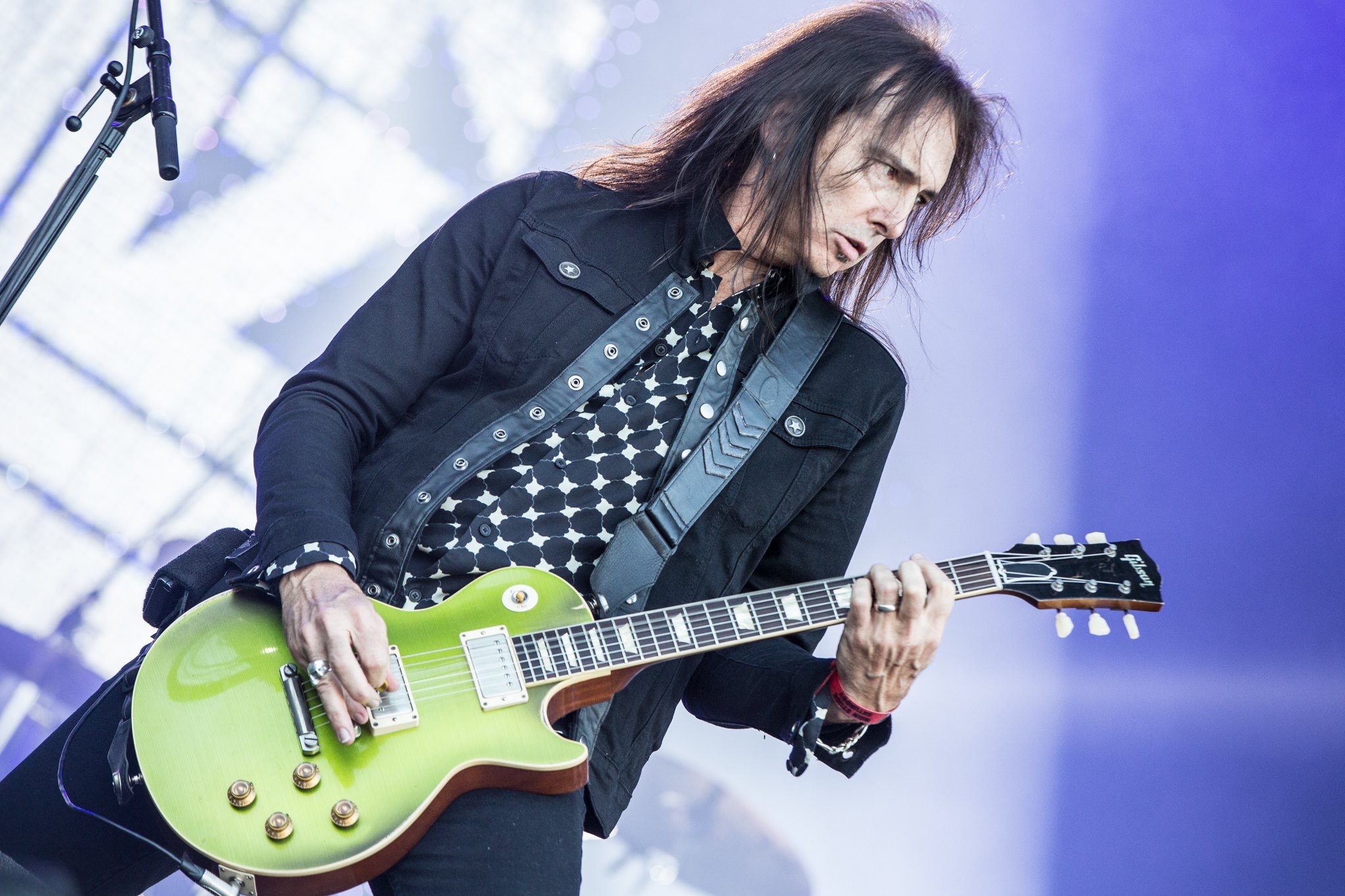 STORYTELLING THROUGH MUSIC – AN INTERVIEW WITH DAMON JOHNSON

The hugely skilled guitarist/vocalist Damon Johnson surely needs no introduction as the quality of his work with Alice Cooper, Black Star Riders, Thin Lizzy, Slave to the System, and superb solo offerings such as ‘Echo’ and the marvelous ‘Memoirs of an Uprising’ speaks for itself. Damon is currently working on his forthcoming record and so obviously, Eternal Terror Live had to have a chat with the great man in order to learn more about the new songs, what it felt like to perform Thin Lizzy’s ‘Black Rose’ LP in its entirety live last year, and what inspires him musically. Read on and do not forget to check https://www.indiegogo.com/projects/damon-johnson-new-album-for-2020#/ out ASAP as there are heaps of interesting things going on over there with respect to the campaign for the new album.

Damon, how are you? First of all, thank you for answering these questions of mine. Secondly, how is work for your new album coming along and are you currently in the studio recording it? What does the band line-up look like this time around?
D: Thanks, Jens. I’ve never done an interview where the question "how are you?" has been so complicated to answer, obviously in the middle of this pandemic the world finds itself in. I’m grateful that my family and I are healthy, and we are happy being together. But there is so much uncertainty here in the U.S. about the virus, the economy, and certainly the music business. The quarantine put a stop to my new album recording process for almost two months, and only last week were Nick and I able to get back into his place for a few hours and work on finishing up three songs that we started back in February (Jarred Pope is on drums, and Robbie Harrington is playing bass).

Could you tell us a bit about when the songs for the record were composed and arranged? How many are we looking at? Musically and stylistically speaking, are they reminiscent of (or similar to) the ones that constituted your previous effort, the marvelous ‘Memoirs of an Uprising’?
D: This latest batch of 12 songs was started back in October, and the bulk of them I’ve co-written with my friend Jim Troglen (as I did on ‘MOAU’). This will be another full-blown electric album with loads of guitar tracks, and lyrics that life over the past two years has inspired.

Speaking of which, I am extremely fond of ‘Memoirs of an Uprising’ and that was my favorite album to see the light of day last year, but how did fans and listeners in general respond to said record? That LP was is just all-out amazing all the way through. Such a brilliant piece of work.
D: Thanks very much. ‘Memoirs…’ will forever represent the launch of my fully focused solo career, and I love that record as much today as I did when it was released a year and a half ago. We were very pleased with the reaction those songs received and I’m proud of the team I assembled to help me promote it.

Could you perhaps briefly summarize or touch on what it is like to work with the legendary Nick Raskulinecz in the studio? Are you friends outside of work too?
D: Nick and I met just after my family moved to Nashville in 2013, and he soon became the producer for Black Star Riders’ second album. During that process he and I established a great friendship, and he produced my solo EP, ‘Echo’, shortly after that. Nick is my favorite producer. He leaves no stone unturned in any part of the process and his enthusiasm for my songwriting and guitar playing has played a major role in me "going it alone" as a solo artist. His producer resume speaks for itself. I’ve no doubt I’m in good hands with Nick.

What bands and artists inspire you to write and compose tunes for your solo project and would you say that you are influenced by things nowadays that you weren’t necessarily inspired by years ago? In other words, has there been a shift or a change of sorts with respect to what bands inspired you, say, fifteen or twenty years ago compared to now? Do you still get a kick out of listening to Aerosmith for instance? Do some of the giants of classic rock still serve as your primary source of inspiration?
D: My listening tastes are incredibly broad, probably for sure compared to many of the bands you cover in your interviews. It’s inspiring to live in a house where there is music playing constantly. My kids are always turning me on to new artists and I’ll find lyrics or melodies in their music to launch a new song from. But mostly I rely on the music of my youth to inspire guitar ideas, and the all-time greats for storytelling and lyrics. Zeppelin and Dylan, Van Halen and Joni Mitchell, Thin Lizzy and Johnny Cash.

In terms of gigs and live performances, everything has obviously crawled to a standstill all over the world now due to the pandemic that is wreaking havoc everywhere, but once things return to normal, what are your plans in terms of touring your upcoming record? Would you consider organizing some acoustic solo performances too? Could you include an awful lot of dates in Europe too, please? 😊
D: It’s wild to think that as of this writing, no one has any idea when touring and travel will return to some level of normalcy. I’m fully expecting to perform some solo acoustic dates first, once it’s possible to book some work, mainly because the audiences are small and intimate and physical distancing can be easily observed. But the instant it’s possible to perform with my band, we will get active quickly. And my booking agent and manager and I were absolutely making plans for some European dates this fall, before Covid-19 changed the world. We shall see what happens.

Just out of curiosity, what bands and albums are you currently listening to and immersing yourself in at home?
D: The new Fiona Apple is crushing, lyrically and rhythmically. And there’s an indie rock band from Alabama called Waxahatchee that has released a new album called ‘Saint Cloud’ that I love; super simple melodies and great lyrics. Jason Isbell has a new album about to drop, and I’ve been doing a deep dive on the great blues artist Taj Mahal this spring. And I’ve also been enjoying loads of ZZ Top.

I am a huge fan of Thin Lizzy and I simply need to know what it felt like to perform the masterpiece that is ‘Black Rose’ in its entirety at the Steelhouse Festival last year? What are some of your memories of that show? What does that legendary LP mean to you on a personal level?
D: My first thought is the joy we all felt in working with Troy Sanders from Mastadon on bass for those Lizzy shows last summer. He brought so much love for the songs into the very first rehearsal and it inspired all of us. Troy is a fantastic human being as well. And without a doubt performing ‘Black Rose’ in its entirety was a musical highlight, especially considering the original band had never performed some of those songs in a live setting. Gary Moore is absolutely one of my greatest guitar influences and his footprints are all over that album. It was an honor to play with the guys again and the fans were fantastic.

Thanks once again for taking the time to answer these questions of mine, Damon – I truly appreciate you taking time out of your schedule to do so. Could you perhaps end this interview by briefly telling us about your Indiegogo campaign and why every lover of kick-ass rock music ought to check it out?
D: Because of the pandemic, we will have two different phases of my Indiegogo crowdfunding campaign. Phase 1 ends this Friday, May 8, at midnight US Pacific Time. The plan is to start Phase 2 in early June, as I plan to have three tracks fully finished, mixed, and mastered that we can share with the campaign supporters. Thank you for this opportunity to tell fans about my new album, and thanks to you and the fans for the ongoing support.