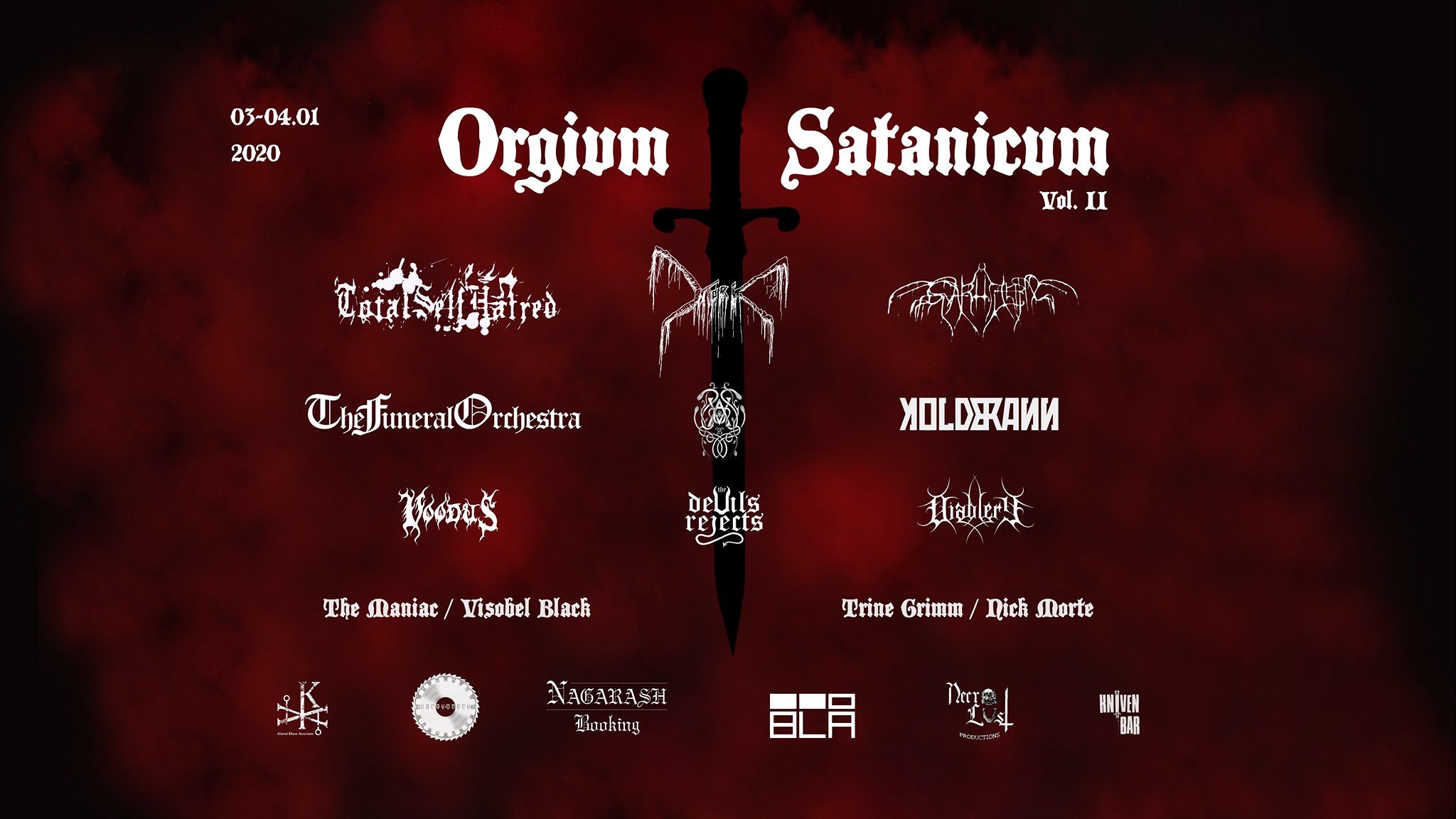 The first festival of the year while predominantly Black Metal it offered a wide variety of music styles and non-music related acts enough to cater to the different tastes in the audience. The artistic contribution was done by Trine Grimm and Nick Morte who are tattoo artists. A Theodor Kittelsen inspired painting was made at record time before the show started, something really interesting and unusual to see.

The pening artistic act differed a lot from what was going to come next with Visobel Black who is a violinist and The Maniac. The stage was set up as if a ritual were going to be conducted, but yeah it turned out to be more of a freak show. I managed to see the whole needle insertions underneath the skin and other painful body punctures up until the blood started pouring out and then I had to leave for fear of fainting. I do think is courageous to take the body to cross those limits, but I guess sword swallowing with no bleeding is more of my thing. So this dramatic and bloody act marked the beginning of what was going to be a really good musical experience.

The bands that played on Friday were all pretty different. It all started with The Devil’s Rejects who combine hard rock and metal. They had a considerable audience for their show and some fans who headbanged the set all the way through. I think they succeeded with setting the right mood for the night. Their latest album called Blood Feast is to be released on February the 28th, you should check it out.

Next was Urarv, I have seen them a couple of times now and their stage presence is something that always stands out and is pretty unique. It’s totally what you would expect from a mastermind that has an Avantgarde background such as Aldrahn. Musically they have evolved from a more Darkthronish/Folk Black Metal to a a bit more experimental sound with different tonalities and lots of rock influence. But still it remains eerie, psychedelic and mental in a ghastly Mercyful Fate way. Their third album is on the making and I think that perhaps it will keep changing and evolving in unexpected ways, so I’m looking forward to see how it will turn out..

Then the total contrast in terms of image appeared in the form of robed musicians who conducted their show by candlelight, nothing more fit to the music. It was a balm to the ears. I really like downtuning. So I enjoyed The Funeral Orchestra a lot. The percussion was pretty simple, but hard and pretty effective. They count with Nicklas Rudolfsson who also plays in Sacramentum, a band that made a comeback and have been headlining some festivals last year .He was a part of a thrash band that I like a lot called Swordmaster, a band that turned into Deathstars. Well instead of joining Deathstars he did something totally different and absolutely awesome such as The Funeral Orchestra. How cool is it to see musicians being so versatile and succeeding at it in totally different genres.

I would really like to see them again, but I guess it won’t be any time sooner since I heard they do not play that often and that this was a rare and special occasion.

After the pretty relaxing and almost trance-like experience it was time for the headliner that could not be more different. Awesome thrash riffing that brings energy levels back to max. Svarttjern are now these days promoting their latest album which is excellent and you couldn’t expect less from seasoned musicians such as HansFyrste, Fjellnord og Grimmdun, HaaN, Malphas from Carpathian Forest. Svarttjern was the best show for many of us. You can listen to their new album here:

OFFICIUM TRISTE – The Death Of Gaia