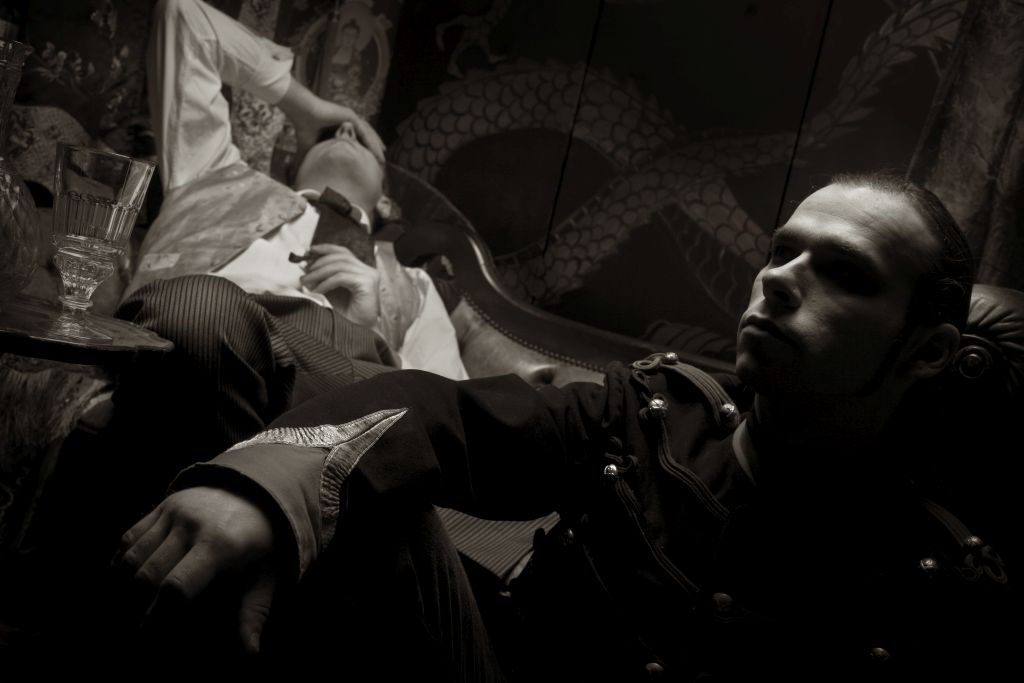 We present you an exclusive premiere from the German Black Metallers PORTA NIGRA!

Four years after their avantgardistic and critically acclaimed effort "Kaiserschnitt", the band returns with a new album that leads them back to the roots of more straight-forward, furious and monumental Black Metal art of the glorious era of the nineties.

While musically not comparable to its eclectic predecessors, "Schöpfungswut" still contains lyrical traces of their decadent and fin de siècle-inspired atmosphere, which the outfit became known for. To present the lyrics in the neccesary manner the band’s core duo decided to work together with a new vocalist: Tongue, guitarist and creator of German Black Metal outfit CHAOS INVOCATION. The production was handled by Markus Stock.

Watch the video for the track "Das Rad des Ixion"

PORTA NIGRA rose from the ashes of various extreme Metal bands based in and around the city of Koblenz. The intent was to create music with a distinct different approach in image, lyrics and music than other outfits of this genre.

The first album "Fin de Siècle" was written and recorded within a year, lyrically heavily inspired by european decadent literature from the likes of Oscar Schmitz, Joris-Karl Huysmans and Oscar Wilde. Musicalwise it draws inspiration from Doom-, Black-Metal as well as Rock and Ambient. The record (released by french label DEBEMUR MORTI PRODUCTIONS) as well as two accompanying music videos (produced by Håkan Sjödin of SETHERIAL) gained a wide attention and recognition in the Black Metal and alternative music scene. Zero Tolerance magazine praised the "importance Porta Nigra places on art as a full package, from music to photographic elements imagery to personal attire" and Legacy Magazine called the debut record a "masterly musical vision of decadence".

The work on the successor of “Fin de Siècle” started immediatly. The album would be called "Kaiserschnitt". Inspired by the fact, that 2014 the outbreak of the first World War would have been excactly 100 years ago, the band decided to build a concept album, that combines their decadent approach with themes about the time of this important event in European history. The band was aiming for a more brutal and stricter sound and decided to work with producer Achim Köhler who, amoung several mainstream metal productions was responsible for genre bending sound-walls of rather unorthodox bands like Totenmond. The unusual lyrical (again completly in German language) and musical approach, that removed the band more and more from more common styles like Black Metal, devided the critics, as did the rather radical coverartwork and bandfotos (that were shot within the house of an active German fraternity). As the metal audience was naturally cautious, the album received warm critics for its unusal atmosphere and lyrical content.

Tensions within the band rose as to how develop the sound with one side going more into the direction of "Kaiserschnitt" pushing the rock and post-rock edges even further, while the other half wanted to go back to a more traditional Black Metal sound. Over the years the latter group would push trough and so it came that the third output "Schöpfungswut" (anger of creation) goes back to the musical roots of the members of the band that lies in traditional 1990ies Norwegian/Swedish and German Black Metal with a lyrical concept that still would carry traces of its decadent DANN ("Die Kosmiker" or "Unser Weg nach Elysium") but would also touch upon more traditional metal topics. To present the lyrics in the neccesary manner the band decided to work together with a new vocalist, Tongue, guitarist and creator of the German Black Metal outfit CHAOS INVOCATION. To find the right way to craft the new songs, that would consist of blast beat drumming and traditional tremolo riffing, the band chosed German producer/musician Markus Stock (EMPYRIUM, producer for SECRETS OF THE MOON etc.). A collaboration that would prove rather fruitful.