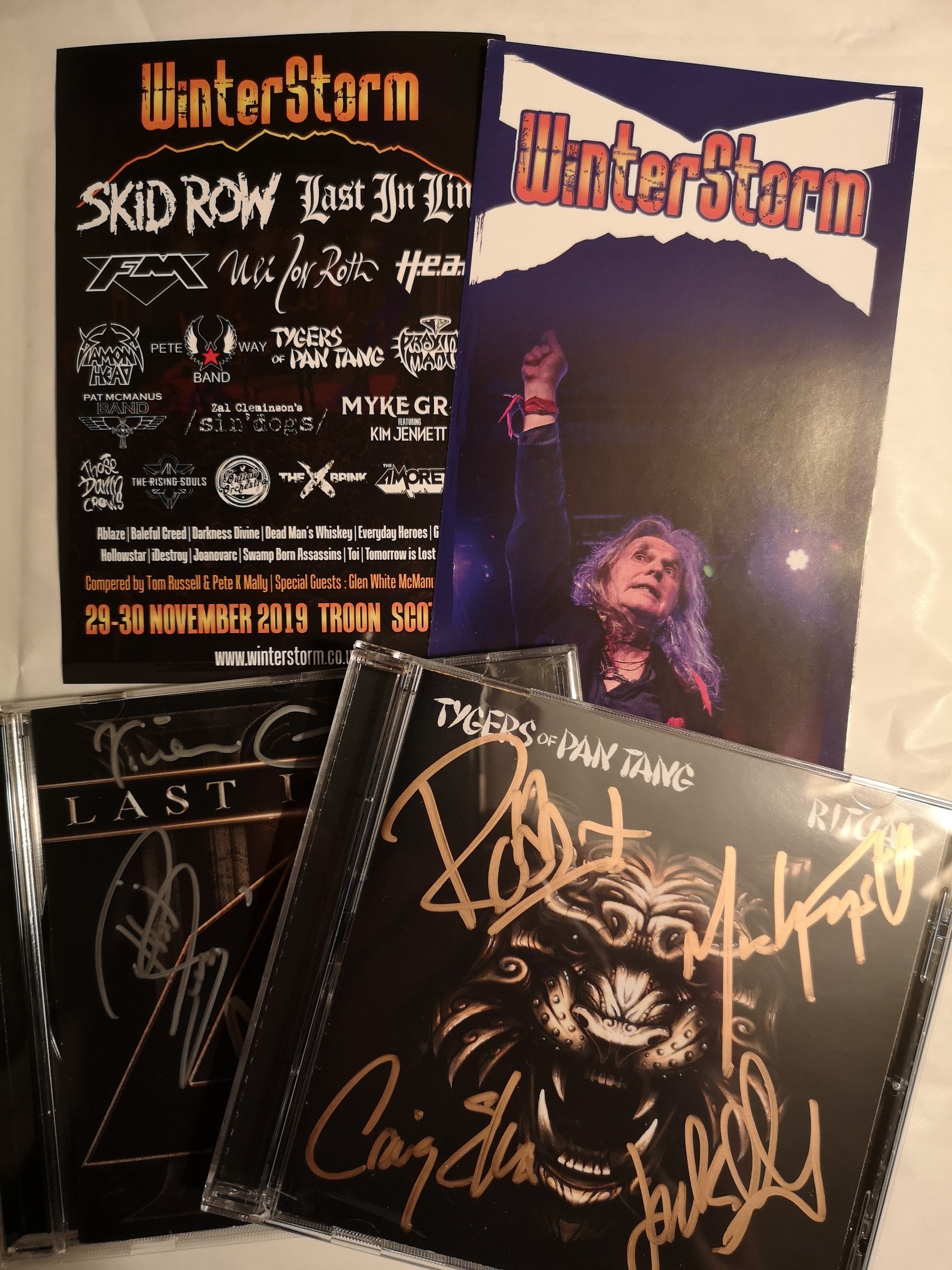 Winter Storm Festival 2019 – A Short and Concise Review
When in Scotland recently, my wife and I decided to pay the Winter Storm festival in the cozy and beautiful town that is Troon a visit as we are both huge fans of NWOBHM, hard rock, classic rock, and the more melodic varieties of said genres. Troon is situated on the coast of Ayrshire and it was a blast to spend a a few days in such lovely surroundings. However, let us focus on the festival itself, shall we? The thing is that I was not planning on reviewing anything as such or “working”,which is to say that I did not go there with the intention of writing a novel-sized article about the entire affair and I had not done a ton of research beforehand either, but you know me; I just can’t help it, so here is a short and relatively concise review of some of the glorious shows and performances that we witnessed there.

We arrived slightly late on Friday but just in time for Pete Way’s rendition of the classic UFO track “Doctor Doctor”, and it was loose and rather jam-like. Truth be told, Way is hardly the greatest singer out here, but the guy is a legend and the band as a whole came across as solid and vigorous. On top of that, it was fantastic to hear Clive Edwards (UFO, Wild Horses, Phil Lynott) on the drums.

Iconic NWOBHM act Diamond Head surely needs no introduction and sounded great. Their superbly written songs both old and new worked perfectly in a live setting, and although there was not a whole lot going on visually, it was nice to just lean back and enjoy their massive-sounding tunes thundering out of the PA. Rasmus Bom Andersen (vocals) sang incredibly well considering that he had a sore throat. Highlights: “Helpless”, “It’s Electric”, and “Am I Evil?”.

FM is a fantastic live band and they were on fire Friday night. There were smiles all around, the sound was crisp and clear, each song they aired was memorable, the vocals were strong, and these guys sure know how to write melodically delicious compositions. In fact, FM are even better live than they are on record in the humble opinion of yours truly, which is also evidenced by their “The Italian Job” live offering. The crowd loved them and deservedly so, but that is hardly surprising when considering just how incredible the musicianship is. A first-rate gig for sure. Highlight: “That Girl”.

Skid Row were the headliners on Friday and I might as well tell you right off the bat that I fucking love these guys. I was really looking forward to this one and they neither disappointed nor let us down. Fiery, energetic, and amazing songs performed with class and aggression is what these skilled dudes are all about, and apart from that, they also know how to get the crowd going. It was an intense and dynamic performance, but perhaps not as ferocious as their London gig earlier on this year at the O2 Forum in Kentish Town. But do not get me wrong; this was a marvelous way to cap off the Friday. Highlights: “Monkey Business”, “18 and Life”, and “Living on a Chain Gang”.

Praying Mantis was essentially the first full show we caught on the Saturday and they totally delivered on all front. It was an utterly enthusiastic performance filled with passion and remarkable tunes that were instantly catchy. The sound was crunchy and packed plenty of punch, and it was arguably one of the best and most confident concerts of the entire weekend. Also, their latest material rocked too and was way up there. Highlight: “Dream On”.

I love and cherish the Tygers of Pan Tang and it was inspiring catch them live on stage. This was yet another highlight for me and their stellar set list was varied and contained old classics, cover versions, and newer pieces off their two latest two killer records. Guitar wizard Robb Weir was firing on all cylinders and this was simply NWOBHM at its finest. Boasting a really hard and heavy sound, the Tygers were sharp and in-your-face. Highlights: “Damn You” and “White Lines”.

Although this might sound like heresy to some of you, we more or less ditched Uli Jon Roth (Scorpions) in favor of other bands (and dinner!), so next up for us was Swedish sensation H.E.A.T., and as expccted, they blew everyone away and tore the walls down by means of their fist-pumping, anthemic hard rock. Lively, vibrant, and borderline insane, this particular ensemble is all about having a good time and going crazy. We caught them in London earlier on this year and they were great that night too, but there was just something special about the performance in Troon that impressed us both. Highlights: “Living on the Run” and “A Shot at Redemption”.

Up next were the phenomenal Last in Line and these seasoned veterans were spectacular and without doubt the heaviest outfit to grace the main stage of the Winter Storm festival this year. How to describe or sum up into words just how wicked their renditions of the timeless DIO classics ala “Holy Dio”, “Stand Up and Shout”, “Straight Through the Heart”, and “Rainbow in the Dark” were? It was thunderous and determined, but there were so many interesting nuances to their performance and it was extraordinary to witness the chemistry between the four of them. With a line-up consisting of Vivian Campbell (Def Leppard, DIO), Vinny Appice (Black Sabbath, DIO), Andrew Freeman (Lynch Mob, Devil’s Hand) and Phil Soussan (Billy Idol, Ozzy Osbourne), Last in Line is a headbanger’s dream come true and I strongly urge you to check their two LPs out asap. In fact, one of the best parts of the entire festival was to experience “Starmarker” and “Year of the Gun” in a live setting both of which are their own original compositions. Highlights: …are you kidding me?! The entire set, damn it!!!

Finally, it was time for the Glen White McManus “project”, which (as its name so subtly suggests) was Chris Glen (Michael Schenker Fest), Doogie White (Michael Schenker Fest, Rainbow, Come Taste the Band), and Paul McManus churning out rocking versions of Rainbow’s “Kill the King”, Michael Schenker’s “Take Me to the Church”, and Thin Lizzy’s “Emerald”. It was a fun and entertaining way to end the 2019 edition of the festival, and you could tell that the guys were having fun on stage. It was loose and under-rehearsed, but that hardly mattered as the spirit of true and proper rock music was present throughout. The most memorable aspects of the performance were Rainbow’s “Temple of the King” and Gillan’s “Sleeping on the Job” with the latter serving as a tribute to the sadly missed Bernie Torme.

All in all, the Winter Storm festival was heaps of fun and it was thrilling and slightly surreal to see and hear so many wonderful bands and artists in such a small and intimate setting. A huge success!

THE DROWNING – The Radiant Dark