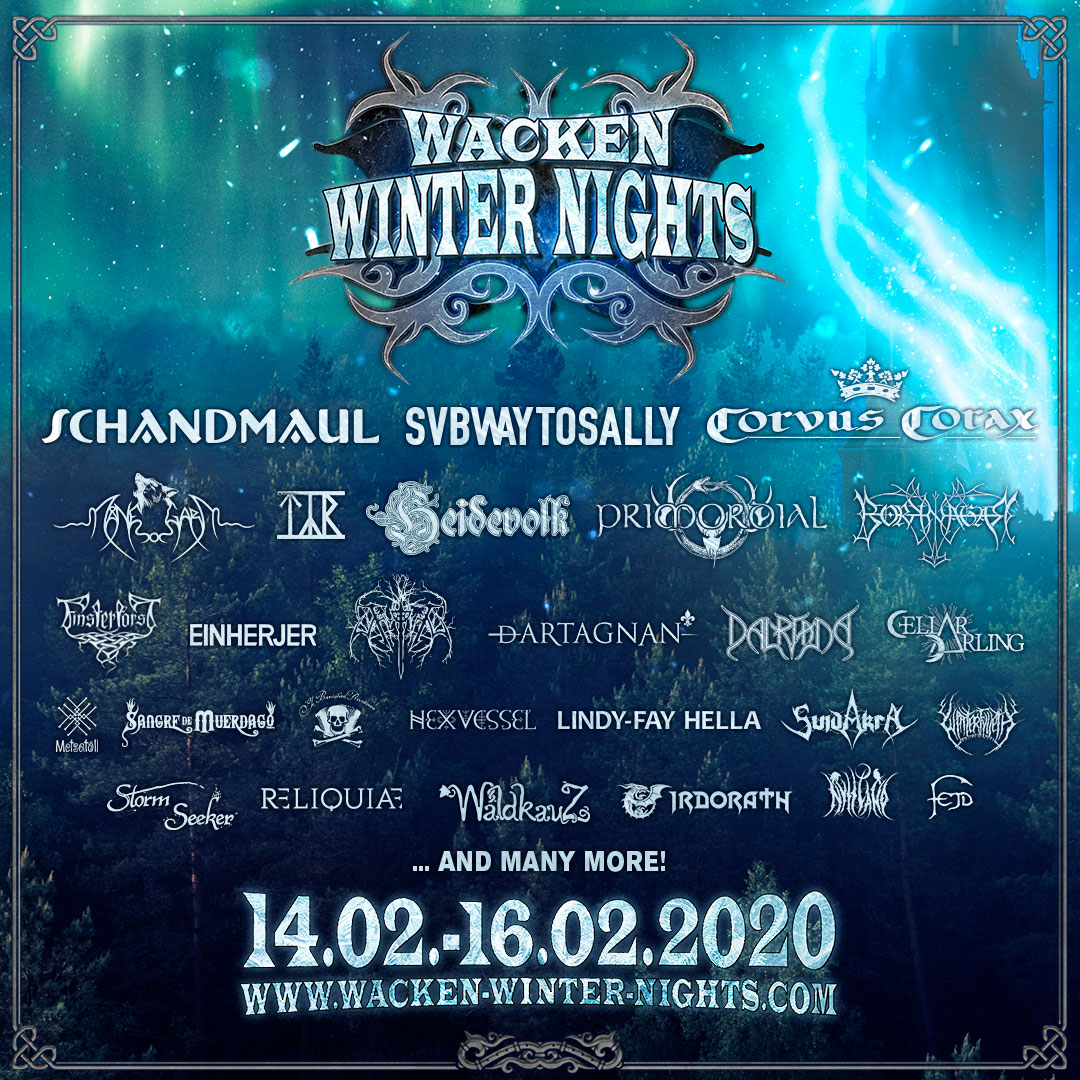 WACKEN WINTER NIGHTS IV – final six bands announced for main stages in 2020
Autumn is just around the corner, but in the festival calendar the murky season just a harbinger of winter. The cold season will bring its own musical delights with Wacken Winter Nights IV taking place from the 14th to the 16th February 2020.

Helge Rudolph, project manager, comments: "With the current fourth band announcement, the billing of our two main stages Ice Palace and Theatre Of Grace is now complete", explains the project manager. "This increases the number of already confirmed bands to a total of 32, but we are not done yet, because many more program items and bands for the other venues will only be revealed in the near future. We thank our fans for the trust that they have put in us, as more than half of all 3-day tickets have already been ordered and we are confident that the fourth edition of the Wacken Winter Nights will be sold out before the end of the year".

CELLAR DARLING emerged as a new creative outlet after the trio Anna Murphy (vocals, hurdy-gurdy), drummer Merlin Sutter and Ivo Henzi (guitars) separated from the successful band ELUVEITIE. With their progressive mix of folk, rock, and metal as well as two albums including the programmatic "This Is the Sound" (2017) as well as the current chart striker "The Spell" (2019), the Swiss quickly captured the hearts of their fans.

As their band name already suggests poetically: FINSTERFORST hail from the Black Forest. Since their founding in 2004, the German folk metal band has continuously managed to create their very own niche with their characteristic accordion sound, hard elements of melodic death metal, and German lyrics. The six piece will travel to Wacken with their current album "Zerfall" (2019) and much critical acclaim.

This winter, the Vikings are coming to Wacken! Månegarm, a veteran band of the Swedish Pagan Metal scene, will hit the festival hard. The often requested trio has just released its ninth album under the title "Fornaldarsagor", but will undoubtedly perform a host of classics and fan-favourites as well.

To some connoisseurs, Pablo C. Ursusson is already knows as guitarist of the city of Leipzig based black metal outfit ANTLERS. But the musician, who was born in the Spanish province of Galicia, has a quite different musical side to offer as well. His band SANGRE DE MUERDAGO is an insider tip in Neofolk circles and beyond. Their current album "Noite" has received excellent reviews as well as earned them an invitation to performance at the renowned Roadburn Festival among others.

Yo-ho-ho, and a bottle of rum! The booming Pirate Metal genre even sets sail from the inland city of Neuss. STORM SEEKER have already signed on a considerable number of fans even without the backing of any major label. Musically, the buccaneers from North Rhine-Westphalia upgrade their folklore metal with cello and hurdy-gurdy.

In the early Middle Ages, swords and shields clashed. Today VARANG NORD let their electric guitars do the crashing. The young Latvians dedicate themselves to their Baltic ancestors by signing up to hard pagan metal and seasoning it with various elements take from their native folklore. Since the promotion of young talent is part of the Wacken spirit, we very much recommend to take at least a peek at this heavy army.

Pre-sales of tickets for Wacken Winter Nights IV (14th-16th of February 2020) have already started at this link: http://wacken.click/wwn2020tix

About Wacken Winter Nights
Heroic warriors and proud minstrels – Wacken Winter Nights founded in the year 2017 are not just a miniature version of the world famous Wacken Open Air. The unique concept of this festival during the cold season combines medieval re-enactment with Fantasy, Folk, Pagan and Viking Rock and Metal… and much more. Visitors can stroll through the picturesque festival village where traditional craftsmen display their skills and offer their handmade goods at the market or they may enjoy fine medieval treats, many of which are produced organically. At the third edition of the festival in 2019, more than 40 bands performed at a total of six locations, including two special acoustic shows in the village church of Wacken, were delivering musical entertainment at its best. In previous years Wacken Winter Nights have been by promoted by Seaside Entertainment, which is part of the ICS Network. The next edition will be run by the newly founded Full Entertainment GmbH, which is part of the same network but with a focus on event organisation.