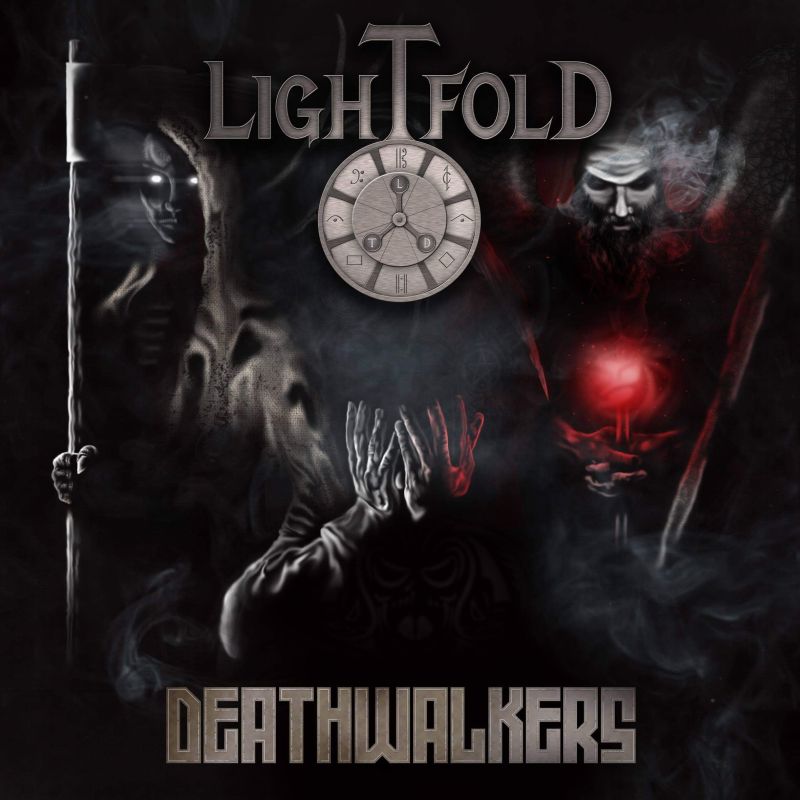 Progressive heavy metal albums can be either some of the most inventive and engrossing experiences or some of the most lifeless, uninspired and boring ones. This Greek ensemble, here on their 2nd full length, puts on a great instrumental show around an insightful lyrical concept, with a particularly fantastic lead guitarwork, oscilating stylistically somewhere between Nevermore, Evergrey, Into Eternity and Queensryche, but their songwriting skills are questionable at best.

"Deathwalkers" is an album built around the concept of the afterlife based on some of the acient religious traditions, including traditional Christianity, but with a twist I have never heard of before, where angels fight for a diseased spirit to secure him or her an eternal spot in heaven. The titular deathwalkers, for example, the mysterious Julia, are the spirit beings which lead the dead through the underworld. Such an interesting concept requires writing ambitious, bombastic but catchy soundtrack in which task Lightfold only partially succeeded.

Admittedly, it starts out promising, with a decent intro and even better first song proper, "Save Me". The intro recalls heavily Dream Theater’s "Metropolis Pt. 2: Scenes from a Memory" in the way the protagonist, who’s on his way home, suffers a fatal car accident, and even further conceptual development resembles the aforementioned classic album. The favorite "Behind The Veil" is the best and most cohesive track with the catchiest earworm for a chorus, an amalgamate of 90s Megadeth-ian verse riffing and Into Eternity melodicism, Thanasis Labrakis’ tasty leads consistent not just throughout the song but throughout the entire record. Of note, in the same regards, are the heavily symphonic "Angel Of The Earth" reminiscent of Megadeth’s "Insomnia" with the excellent acoustics recalling Metallica’s "Fade To Black", of note is also the final song proper (before the closing intro), "Ascending" with its near "Silent Lucidity" Queensryche verse acoustics and strong Anathema "Eternity" chorus riffing. Finally, the remarkable performance of the female aria trio, Margarita Papadimitriou, Christina Alexiou, and Sofia Karvouna is, too, worthy of note, as are Diogenes Ville’s audible and present bass and Harry Polimeneas’ excellent piano and synth arrangments in sync with Ville. But that is all the good concerning "Deathwalkers".

The album has three major flaws. The first is the unremarkable, flat and downright dispassionate vocal performance of Theodor "Martin Deathwalker" Martinis, who channels Tom Englund (Evergrey), Warrel Dane (Nevermore), Geoff Tate (Queensryche) and even Paul Kuhr (Novembers Doom) to sound convincing and powerful, but, sadly, he comes off half the time as one who tries too little (The Collector, Deception), recalling the weaker Matt Marinelli (Borealis) during more power metal moments, or as one who tries too hard, especially on "The Battle", the only track where he unwisely attempts at hardcore growling coming off as Lamb Of God’s Randy Bythe with a severely sore throat. The second flaw is the overall songwriting, which is remarkably inconsistent and sloppy except for the aforementioned exceptions, and, while there are notable pieces, such as the "Terminator 2: Judgment Day/ancient The Gathering" keys (Demon Upon Me) or "Cryptic Writings" Megadeth-ian riffing (The Collector) they merely serve to accentuate the lack of direction within the songs. The third flaw which is beautifully tied in with the other two is the prevailing lack of oomph and passion oozing from most of "Deathwalkers". Most of the time, Lightfold sound as though they just weren’t sure where to go next, as good catchy ideas appear briefly and bad boring ones drag on for who knows why so long.

Lightfold should take heed that they are not Queensryche and "Deathwalkers" is far from "Operation: Mindcrime". When a heavy metal record exceeds the universally agreed on 40 minute mark there had better be serious reasons behind it and "Deathwalkers" feels artificially prolonged more than half the time. There is no denying that Thanasis Labrakis is a fantastically skilled and talented guitarist any metal band would be lucky to have but his songwriting skills could use some serious tutoring, especially, in terms of sifting through the wheat and tares. Neither awful nor remarkable, "Deathwalkers" can be best described as simply another progressive metal album and let this be my closing statement.