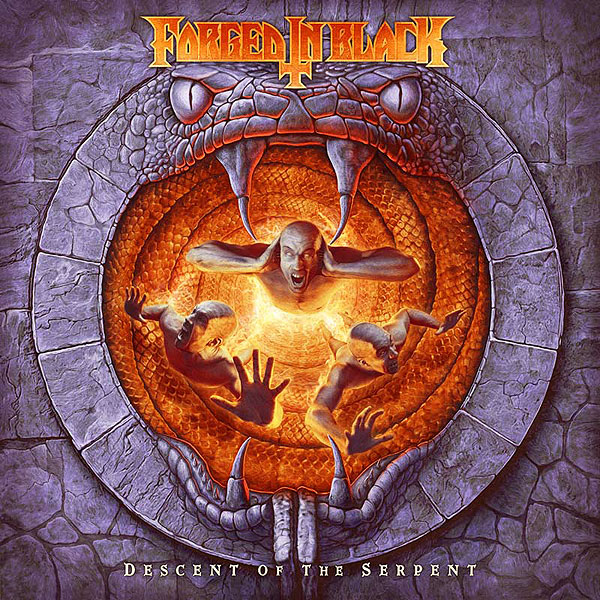 FORGED IN BLACK – Descent Of The Serpent

Sometimes it takes a new band, trapped between influences and aspirations, a good while to find its own sound, the struggle not rarely continued up to a third or fourth release (vide: Slayer). Then there are those who find it on their first record. Black Sabbath or Mercyful Fate certainly come to mind in this regard which is also true of their followers, British heavy/thrash metallers formed in 2007 as Mercyless Fail (allusion to Mercyful Fate?). Carefully honing in their sound for 4 years before finally independently releasing the "Forged In Black" debut LP, an effort surprisingly mature and well produced for debutantes, the Britts changed their name to Forged In Black (FIB), after their debut album which they reissued in 2013.

"Forged In Black" recalled Trivium’s own "Embers To Inferno" with classic Iron Maiden and it was immediately followed by "The Tide" EP (2013) with the sound more of "And Justice For All" Metallica which emphasized their Mercyful Fate-ian edge. FIB further enhanced their sound on "Fear Reflecting Fear" EP (2016), produced by Romesh Dodengoda (known for Bring Me The Horizon, Bullet For My Valentine, Motorhead and Sylosis productions), adding Megadeth and Flotsam And Jetsam as well "Blood Mountain" Mastodon for good measure, and with the "Sinner Sanctorum" EP (2017), the latter retaining Trivium-ish melodicism howbeit somewhat strangely subdued in the Chris Tsangarides’ (Judas Priest, Thin Lizzy), production which recalled Beyond The Embrace with Black Flag as well as early Black Sabbath. The two EPs paved the way for this 2nd LP called "Descent Of The Serpent". Where in the band’s discography lies this new disc?

Heralded by the label as "an album destined for greatness" this 48:08 minute 9 track affair is the band’s most balanced, best produced (courtesy of Romesh Dodengoda due to Chris Tsangarides’ death), most accomplished work to date. Essentially a classic heavy metal album in the vein of Iron Maiden (When Hell Is Done), Judas Priest (Vendetta) and Mercyful Fate (Palm Of Silver) "Descent Of The Serpent" can thrash like it’s Testament’s business (title track), groove like Pantera’s "Cowboys From Hell" (Seek No Evil) and spell doom for your miserable soul on the slightly Morbid Angel-ic "Schadowcasters" and even wax progressive like Dream Theater or powerthrash in a Nevermore-ic fashion (Aphelion Tormentor). The material, despite some humurously obvious influences I mention later, is fresh, exciting and varied with excellent execution courtesy of Chris Stoz Storozynski (vocals), Andy Songhurst (guitars), Chris Bone (guitars), Kieron Rochester (bass, backing vocals) and Kevin Rochester (drums), everything sounding positively alive and furious or depressing and meditative when appropriate.

Specifically, two songs come to mind to showcase the band’s ability, maturity and attention to detail: the absolutely perfect metal anthem "One In The Chamber" and the ballad-ic wonderfully syncopated and structured "One Last Sign" which rivals Nevermore’s "The Heart Collector". The former’s attractive fiber is aided by the insightful lyrics and some "Domination" Pantera-ic riffing to say nothing of the fantasticly epic chorus. The titular one in the chamber is a single bullet in a revolver with which one can play russian roulette, the shooter never knowing whether the pistol will click or fire to kill its victim, the deadly game made famous by the Vietnam War motion picture "The Deer Hunter". In this song the simile is used for the unpredictibility of the volatile and fickle human nature which Storozynski warns against in a classic Ronnie James Dio vocalisation while echoing Jesus Christ’s in the Gospel of John, who did not entrust himself to man for he knew what was in man (2:24-25). It must be emphasized how excellent fit the often dual Storozynski/Rochester vocals are, now Dio now Byron Davis from the now defunct and sorely missed metalcorers God Forbid.

Few great albums are flawless and neither is Forged In Black’s 2nd LP. Some of the songs have abundance of excellent riffs such as the fabulous Megadeth-ian one driving "Aphelion Tormentor" or incredible dual solos recalling Machine Head’s "The Blackening" in the title track or "See No Evil", technical proficiency in "Shadowcasters" or truly enchanting acoustic work in the vein of Iron Maiden’s "Fear Of The Dark" (When Hell Is Done), but sometimes they don’t transfer fully into songcraft, so, while you can understand "Seek No Evil" as an opening warm up for the fantastic "One In The Chamber", the heavily Mercyful Fate-ian "Palm Of Silver" strikes me as a cheesy quotation of Megadeth’s "Prince Of Darkness/The Doctor’s Calling" climate, complete with the silly laughter and ghoulish gloom and doom that may have gone somewhere had it not prematurely faded out as the only song to do so. All these flaws are few but they do influence the score.

"Descent Of The Serpent" is a great if imperfect disc from true metalheads for true metalheads and that fact is audible loud and clear throughout. If you like albums such as Pantera’s "Cowboys From Hell", Testament’s "The Formation Of Damnation", Death Angel’s "The Dream Calls For Blood" or Nevermore’s "Dead Heart In A Dead World" with great clean vocals, this album is for you.