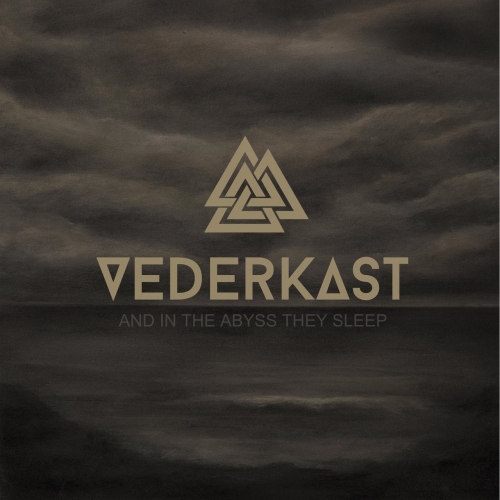 VEDERKAST – And In the Abyss They Sleep

The info on this Norwegian progressive stoner rock/metal is very obscure but what we do know is that they have come into being as Vederkast sometime in 2014, consist of four members: Paul-René Aronsen (vocals, bass), Finn Fodstad (guitars, backing vocals), Sindre Bakland (guitar) and Magnus Tornensis (drums) and have released two albums: "Northern Gothic" (2015) and, this here, "And In The Abyss They Sleep" (2018).

"Northern Gothic" was a progressive rock album with elements of hardcore and significant dose of grunge in the vein of Soundgarden, Mother Love Bone, Temple Of The Dog and Alice In Chains, with some complex technical riffs (Forget Me Not) and Opeth-ian progressive arrangments (Meliora) but what truly stood out was a magnifiscent over 8 minute suite "Remain" with parts recalling Prong’s "No Question". Aronsen’s vocals were the only thing in question, competent in lows but strained and off key at highs. Three years later, has Vederkast created something progressively better than "Northern" with "Abyss" or did they serve, essentially, the same album twice?

With "And In The Abyss They Sleep" Vederkast expand upon the ideas of their debut while sailing in decidedly less simple, more progressive waters. On that note, a great shadow of Pink Floyd’s "A Momentary Lapse Of Reason" looms over "Abyss" for the gentle body of water flow ending it the same way it opened the aforementioned Pink Floyd album, "Hope Lost" and the title track, not surprisingly two songs that frame the disc front and back the most affected by "Reason". Of note is the continuance Vederkast achieves through playing the main riff of the closing title track backwards "Blackened" Metallica style as the intro "In The Abyss", as well as using part of the title as opener, similarly to, say, Omnium Gatherum’s "The Burning Cold" (notabene: my album of the year 2018).

Another album that strongly influenced this effort seems to be Soundgarden’s "Badmotorfinger" for the unique sound that Vederkast appears to emulate (In The Waves), although "Superunknown" could also be of reference in the way Vederkast progresses from forte to piano and vice versa or for the virtuosic Fodstad/Bakland guitarwork strongly oozing of Chris Cornell/Kim Thayil at the end of "Black Hole Sun" (Echoes Diminish). Because Paul-René Aronsen has grown as a vocalist, he now is capable of croons worthy of Benjamin Burnley (Breaking Benjamin), the despair and anguish in his tone properly complimenting the music even at highs (Reflections Linger). On that note, he sometimes recalls Jonas Renkse from Katatonia’s "Great Cold Distance", especially during Vederkast’s more Katatonia-ic choruses such as the favorite fantastic "Blindfolded" where the chorus progresses into choirs evoking a feeling of waking up from a bad dream and facing brand new day where everything is possible. Some of the dissonant complex riffing reminds me of Mastodon’s "Blood Mountain" such as in "Hope Lost" which also recalls Opeth and Machine Head, while the syncopation of his bass with his vocals – Tool’s "Undertow" or "Aenima" in "Yearning". And while we’re on the section, I’m really impressed with Tornensis’ inventive and intricate drum patterns (Searching, Reflections Linger, Echoes Diminish), as he can play along and go on his own in a split second. Finally, Vederkast can get truly moody and atmospheric in a Depeche Mode-ian/Alice In Chains-ic fashion (title track).

Overall, then, everything is heavier, bigger and more progressive than before and I think this is in no small part thanks to the practically fifth unofficial Vederkast member responsible for the production, mix and additional various instrumentation, Yngvar Mehus, the man seemingly all over the place. Then, there’s Tarjei Antonsen’s additional keys on the title track and Kjetil Andreassen’s string arrangments on "Hope Lost" along with other guests all without whom this album would not have been the same.

What does not work for me is the way Vederkast tends to occassionally drone on for a long time extending a particular part seemingly to no end, such as in "Hope Lost" or the title track, although that could be partially excused because of the progression they wanted to impose on the material. Indeed, "Hope Lost" is such a moody, calm track for an opener (if you don’t count the short intro) that it boggles the mind why they would choose to start with it for any other reason. More frustratingly, I hate their tendency to bury the memorable, melodic parts underneath seemingly unrelated heavier material, indeed, not letting the part breathe, killing the momentum for the sake of heaviness such as on "Reflections Linger" (yeah, why do they not linger?!). These are all things that seriously lower the score of individual songs and influence the overall score in the end.

On their latest effort Vederkast improves their craft, taking the best elements that made "Northern Gothic" good and incorporating them into creation of "And In The Abyss They Sleep" while adding more influences and progression, but they need to practice progressing in such a way so as to not kill what makes the song compelling to listen to. Might I suggest, therefore, building up your next effort on "Blindfolded" and "Echoes Diminish"?

WARKUNT – Of Ruins And Agony