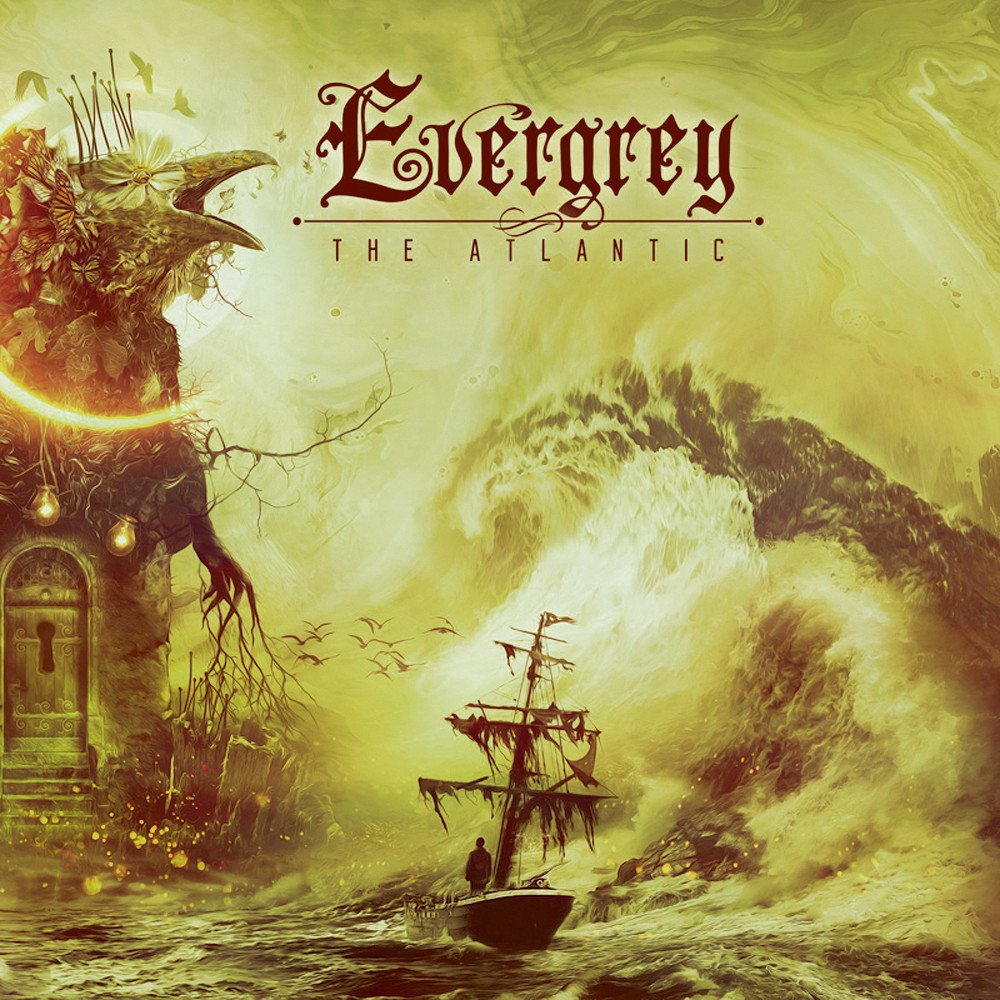 Frightening is this passing of time, once said Death’s mastermind Chuck Schuldiner to a Polish "Metal Hammer" magazine interviewer. And indeed, it seems I reviewed the near-perfect "The Storm Within" from the Gothenburg progressive/power metal masters just the other day and gave it a 5.5/6 score. But only I and the host of heaven know how much has gone on between "The Storm Within" and "The Atlantic" in my life. It seems, then, that Chuck’s words should be augmented to say "Frightening is the passing of time…yet so relative", because some things distant by time can be so close to our hearts that they seem timeless to us.

"The Storm Within" was Evergrey’s most mature and magnifiscent work to date. Yet I am not the same (naive) man I was nearly three years ago and neither are vocalist/guitarist Tom Englund, guitarist Henrik Danhage, keyboardist Rikard Zander, bassist Johan Niemann and drummer Jonas Ekdahl who make up Evergrey circa 2019. Could it be that on their 11th album Evergrey, who has been around for as long as the universally acclaimed Death’s best work, "Symbolic" album (1995), has matured above and beyond their revered predecessor? How are they different through the passing of time and life? After all, we have to remember that "Hymns For The Broken" (2014) was the first in a thus named trilogy, "The Storm Within" was the second act, and, this here, "The Atlantic" is the final, third one. "The Storm Within" surpassed "Hymns For The Broken". Does "The Atlantic" surpass "The Storm Within"?

Yes, "The Atlantic" surpasses "The Storm Within" despite earning the same score. The songs are better, more intricate, more varied, more progressive, almost every track adorned with a middle progressive transition. Certainly, too, "The Atlantic" is a more mature work. In fact, my initial remark that I was less naive now then nearly three years ago interestingly also applies to the lyrical message of "The Atlantic". It’s actually frightening how the trilogy reflects my own life exactly at the right time, as if my life were scripted by it. It helps to see the trilogy, whether or not Evergrey sees it that way too, as different stages of grief according to the Swiss American psychiatrist Dr. Elisabeth Kübler-Ross. Whereas "Hymns For The Broken" seemingly revolved around denial and anger, "The Storm Within" involved bargaining and depression (and a little denial for good measure), with "The Atlantic" intially still stuck on depression but gradually accepting one’s fate until the end. In that sense, "The Atlantic" is more sober, more realistic and, paradoxically, more hopeful. "No star is ever lost we once have seen" – teaches poet Adelaide Anne Procter in "A Legend Of Provence" – "We always may be what we might have been". Our heaven is dead in search of new horizon (A Silent Arc) and therefore I must find my beacon to let what’s dead come back to life (Beacon)

There’s so much on this disc I could cover in this review. I could talk at length about how this is the band’s heaviest and most epic release to date, how Tom Englund and Jonas Ekdahl have outdone themselves with the production, everything powerful yet clear, every instrument distinctly possessing its own identity yet perfectly a team member. I could elaborate on the songs that have become individual symphonies rather than just songs, symphonies you can sing along to, no, scratch that, songs you WILL sing along to. I should mention how Evergrey threw caution to the wind regarding genre identity, how they incorporated death and doom and even melodeath in different measures and how it all fits perfectly. I could muse about how this album both picks up exactly where "Storm" left off (It’s not over/we’ll soon be closer than before/can’t let this distance keep our destined souls apart), in a striking counterpoint (remote hearts now too distant to survive another year in slumber/the empyrean silence speaks telling me it’s far too late), yet it is also a separate piece of work that stands on its own. I could say not a few words about magnifiscent and brilliant instrumentation, the solos (Currents, All I Have), the Nevermore-ish drumwork and riffing (A Silent Arc, Weightless, This Ocean), downright classic rock sounding bass (Departure), beautiful, infectious melodies galore! But I won’t.

Instead, I will give you just a taste: describe briefly three tracks I loved the most and for different reasons. First, I think that "Departure" is easily the most beautiful, the most moving and the most emotional song Evergrey has ever penned in all twenty-four years of existence. It is a masterpiece of progressive rock/metal. Listening to it is like revisiting the most moving parts of Marillion’s "Season’s End", "Holiday In Eden" or "Brave", Tom Englund even sounding like Steve Hogarth. Its keyboard/guitar conversation is like a duet of two lovers destined to fall apart the minute they stop singing – positively heartrending. "A Secret Atlantis" is a different animal: heavy, abrasive, aggressive like Fear Factory’s "Zero Signal" yet not devoid of melody like Scar Symmetry. Then, there’s "Beacon" – a perfect marriage of Swallow The Sun’s doom and Megadeth’s "Youthanasia". Doom, death, beauty, hope, despair, controlled anger enchanted in cleft and tone, to borrow from Machine Head’s "Darkness Within".

"The Atlantic", and this has been consistently true about Evergrey since "Hymns For The Broken", does not have anything even remotely close to a filler, but there are still some tracks that I feel have not fully realized its potential, and no, I am not talking about the Depeche Mode-ian instrumental interlude "The Tidal" which serves its purpose very well. "Currents" is an excellent melodic death metal track but it lacks the depth and progression of "A Silent Arc" or "All I Have" as is the case with the wonderfully aggressive and extreme closer "This Ocean" that recalls Pantera’s "The Floods" in the end. There’s an old Polish saying "your appetite grows while you eat" and these songs can appear slightly disappointing after such feasts as, say, "Departure", but it must be said, nothing here merits taking away more than half a point.

Evergrey has done it again with "The Atlantic". We have another progressive metal near-masterpiece we can cherish along with "The Storm Within", "Hymns For The Broken" or "Recreation Day". But with this one, Evergrey tapped into the deepest caverns of their creativity and skill, heavier but gentler, more melodic but more aggressive, more epic but simpler, again, creating their best work to date. This review is purposely understated because you must hear "The Atlantic" to believe it, absorb it into your mind, heart and spirit, to become one with the pain of he, who, like yours truly, had cried this ocean but has finally accepted after Sholom Aleichem that "life is a dream for the wise, a game for the fool, a comedy for the rich, a tragedy for the poor".