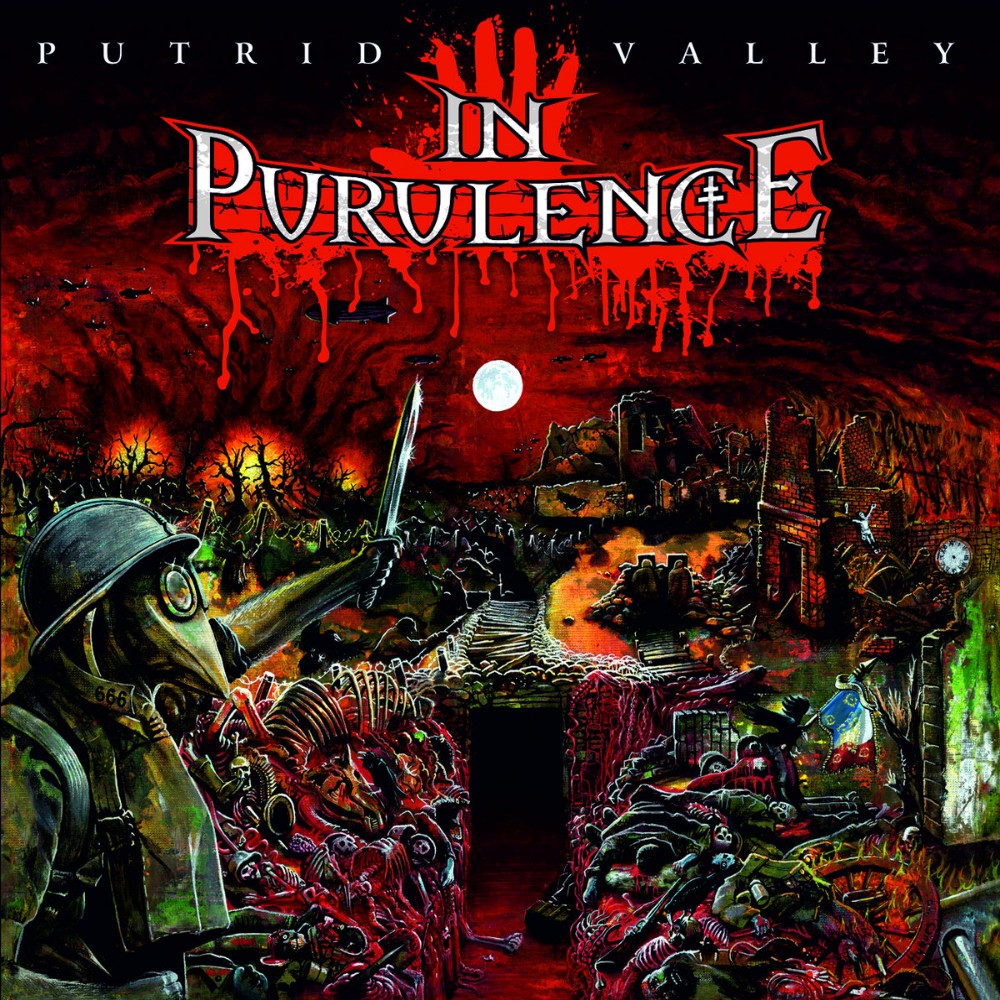 This fairly new French death metal ensemble was spawned in 2014 but they have been inactive until 2015, so the material for their debut album, presented here, "Putrid Valley" was created in about two to three years. Unlike some of their other labelmates, these guys have been lucky, this debut being their one and only release before they were signed. The band’s lineup consists of five musicians with weird nicknames but I was able to find their real names on Encyclopedia Metallum. Accordingly, In Purulence is: Benjamin "Hrothgar" Dufossé (lead guitars), Sylvain "AzeRooth" Laversin (rhythm guitars), Valentin "Gravdal" Leroy (drums), Pierre "Kildengaard" Hazebroucq (vocals), and Pierre-Nicolas "Bassturd" Idziak (bass). Together, they go for old school death metal with a fair amount of melody, for a total of ten tracks in just over 33 minutes. What do they have to offer?

What In Purelence offers is hardly innovative or original both musically and lyrically. Just one glance at the front cover and the track list and you know exactly what this deathly poetry concerns: one of the longest and deadliest battles in World War I (then called The Great War), the German-French battle of Verdun which lasted 303 days, claimed close to 814, 000 casualties, including 303,000 lives and 216,000 wounded, while essentially, was a pointless excercise in carnage, as aptly puts In Purulence in "Verdun", "today your victory tomorrow your defeat for a few iches of territory", a characteristic, nota bene, that was true of Vietnam War some fifty years later. In Purulence, considering the repulsive name and the image, seems to take a cynical yet apparently anti-war stance in their lyrics, which makes sense when you realize that most wars have been thought for one two-fold reason: 1. make the rich richer, 2. make the poor fewer.

Musically, as previously mentioned, In Purulence is based in old school death metal of the late 80s/early 90s and some of their latter derivatives. Their sound sits somewhere between Living Sacrifice’s "Inhabit", Hypocrisy’s "Osculum Obscenum" and Immolation’s "Here In After", in that the main slower riffs are crushingly heavy and abrasive, section thunderous and distinct, while the guitars in the mix tend to fall apart at higher speeds. You may also add Asphyx (Beginning Of Nightmare, Flower And Corpse, Marechal HAIG), Dismember (Patriots), Grave (Verdun), Obituary (No Retreat), Carcass (Marechal HAIG), "Peace Sells" Megadeth (Butchery Of War), Death’s "Leprosy" (The Last Attack, Human Dismembering) and, interestingly, Biohazard (No Retreat, The Last Attack), plus, Hrothgar’s more melodic guitarwork recalls Gregor McIntosh from "Lost Paradise/Gothic" Paradise Lost era. There’s even a moment where the gargantuan riff is basically "Gothic" with modern tone weight (Human Dismembering), courtesy of AzeRooth. Needless to say, as you have probably figured out, performances are great, especially Gravdal slays with thunderous drums and Bassturd with distinct, genuine-sounding bass, front and center in most tracks.

While Kildengaard’s guttural/screaming vocals are serviceable, they do not exactly help In Purulence stand out from the death metal horde. But there are two things that do help In Purulence stand out. The first is the sheer over the top brutality of some of the transitory riffs such as in "The Beginning Nightmare" and "Verdun", and I particularly loved those around 2.22 mark in "Butchery Of War" and at 1:15 mark in "Human Dismembering". I suspect this effect is achieved by AzeRooth, Hrothgar and perhaps even Bassturd playing the same riff in tight unison. The second thing that helps In Purulence distinquish themselves is actually similar to Flesh Hoarder, the knack for some really engaging melodic beginnings of the songs, for instance in "Verdun", "Patriots" or "Human Dismembering". Would it be too much to ask to have these motiffs repeated throughout the song? As it is now, the songs are of fairly even above average quality but I would distinguish the second half of the disc more that the first, especially considering such great tracks as the favorite "Verdun", "Marechal HAIG" and "Patriots".

Among album’s flaws I would list the aforementioned production issues, some less exciting songwriting such as the arguably worst track on the record, "Bloody Skin" or a little better "Butchery Of War", and pretty consistent lack of repetition of the melodic, catchy parts, none of which is surprising considering that "Putrid Valley" is In Purulence’s debut album and their only release to date.

Far from original or innovative, In Purulence knows how to spark interest in a listener but the songwriting is inconsistent, at times appearing aimless. True, they are already more interesting than Kill Everything but not quite the quality of Depravity, so if they honed in the songwriting and improved the mix they could offer a much more effective experience on the sequel.

WARKUNT – Of Ruins And Agony