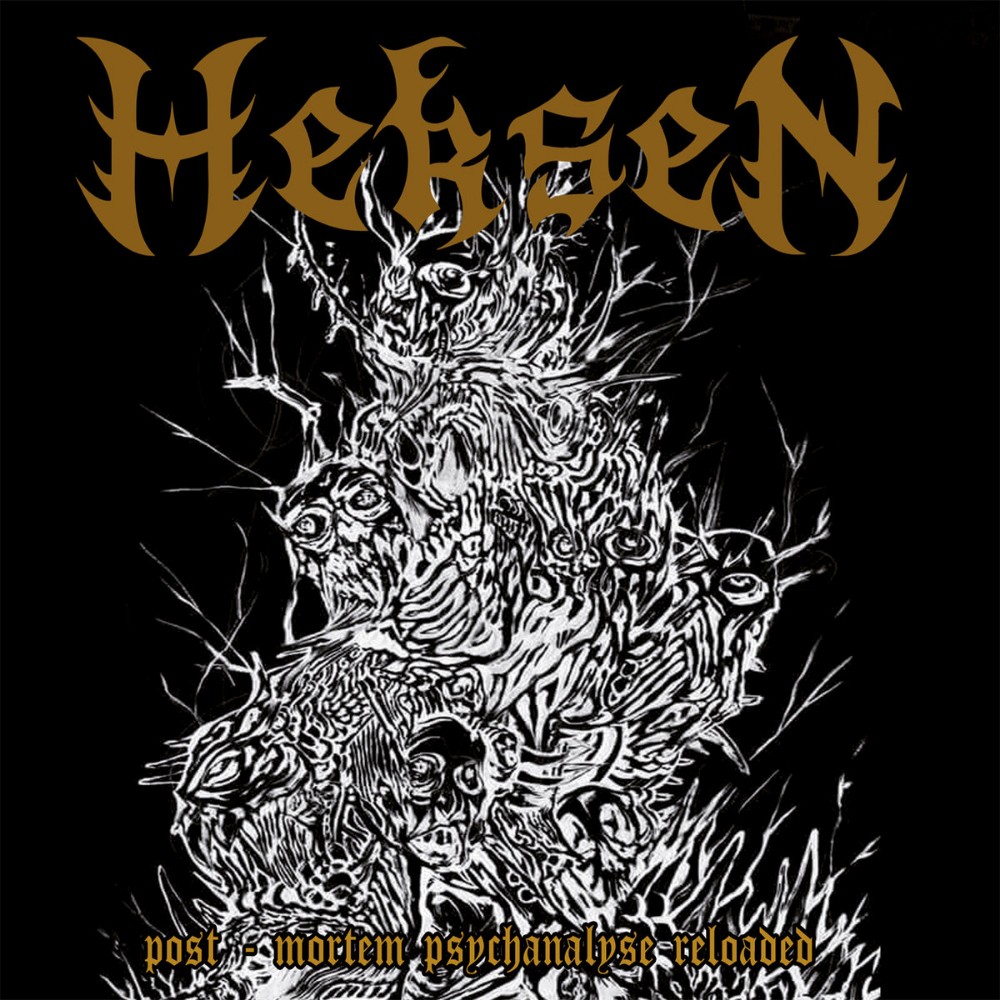 The French death/thrash metal act formed in 2008 and their first demo, "Inquisition: The Way Of Suffering", was released a year later. Heksen broke up in 2011 only to reactivate two years later. Their debut album, "Post-Mortem Psychanalyse" was independently released in 2016 and caught attention of Great Dane Records, whereby the idea of releasing a complete anthology of the band was born, realized under the title "Post-Mortem Psychanalyse Reloaded" and released last year.

"Post-Mortem Psychanalyse Reloaded" features, in order of appearance on the disc, the original debut full length "Post-Mortem Psychanalyse", two brand new tracks plus the cover of Entombed’s "Wolverine Blues" , and the original "Inquisition: The Way Of Suffering" EP, in all, a sixteen track affair remixed and remastered by Vincent Bigaillon (Bloodtroopers, Ghusa). This way, someone unfamiliar with the band can observe their evolution from the EP, through the debut LP to the more recent material on one record with the best sound to date. How did Heksen’s music change over the years? Which version of Heksen is best?

To answer these questions, let’s split the core of this review according to the three divisions described in the aforementioned query, but in order of original release of each division: first the EP, then the LP, then the newest tracks including the cover. Let each division be separately scored, scores totalled and the final score be the mean.

"Inquisition: The Way Of Suffering" EP, contains five tracks and was originally recorded with Michel "Necro_666" on vocals and KoNraD on guitar and programming. This material strongly recalls Living Sacrifice’s "The Hammering Process" album in terms of rough rugged abrasive sound as well as the vocals, Michel’s growl/screams similar to Bruce Fitzhugh’s when he does not recall Napalm Death’s Mark "Barney" Greenway (Let’s Dance). The tracks vary significantly, but they all have great amount of melody. Some are more thrashy, such as the Testament-ian opener "Agony" howbeit with a Nile-istic riff at the end, or the Machine Head-ian "Heretic Holocaust" howbeit with a classic My Dying Bride-ian riff in the middle. Others are more true to death metal, such as Napalm Death-ian/Deicide-ish "Let’s Dance" whose core riffs are similar to Fear Factory’s "Concreto" or the early Hypocrisy-ic "Revenge". My least favorite track is "Let’s Dance" because it is the least melodic, seemingly relying mostly on sheer brutality. Heksen shows strong identity from the first release but there’s plenty of room for improvement. Overall, I score "Inquisition: The Way of Suffering" EP a strong 4/6.

Next up – the original "Post-Mortem Psychanalyse" album, containing eight tracks. This LP was recorded with Michel "Necro_666" on vocals, Etienne on lead guitar, Jeremy on rhythm guitar, Damien on bass and Chris on drums. The LP, recorded seven years later, is a significant improvement over the EP in terms of sound and songwriting and even Michel’s vocals have changed into an amalgamate of Glen Benton (Deicide) and Koen Romeijn (Detonation), not surprisingly, both bands’ influence dominating the album. The cheesy, gore metal-style mysoginistic sample gives way to a classic horror intro/instrumental "Persecution" written by Jeremy Faillant (rhythm guitarist’s full name?) and to all the subsequent tracks of good to great quality, mostly death metal but not without some thrash lurking in the shadows, such as the "Chaos AD/Roots" Sepultura-ic riffing in "The Man From Nowhere", some which also recalls Living Sacrifice’s "Truth Solution", or, on that last note, the Earth Crisis/Hatebreed hardcore in "From Victim To Executioner". Another strong influence is Amorphis’ "Karellian Isthmus" in "Behind The Mask", "Neo Cortex Annihilation" and "Eternal Misanthropy", the latter also recalling Dark Tranquillity’s "The Gallery", the first some Paradise Lost "Lost Paradise" guitarwork. And what would a gore-themed death metal album be without some slightly jazzy Dying Fetus and Slayer influence (The Walking Dead)? Overall, the LP is a strong, powerful and pretty original release, in every aspect improvement over the EP, thus deserving a 4.5/6 score.

Third, the two new tracks, including the cover of Entombed’s "Wolverine Blues". These three tracks were recorded with Michel "Necro_666" on vocals, Morgan on lead guitar, David on rhythm guitar, Damien on bass and Chris on drums, the lineup which persists to date. Both "Patient Zero" and "Dismembered To Be Buried" are generally in the vein of the 2016 LP but there’s much less melody, the material more brutal in the vein of early Hypocrisy, Cannibal Corpse (complete with George Fisher-like low gutturals), Napalm Death and, well, Entombed, whose cover "Wolverine Blues" is slighty heavier, if, besides, pretty similar to the original, except it goes right into the groove without the slow riff intro and hence it’s shorter by twenty seconds. Overall, the three bonus tracks get a strong 4/6 score.

Having combined the scores for all three divisions, the mean resulting slightly above 4, I scored the entire anthology 4/6, with the 2016 LP the best material Heksen presents to date. However, the excellent performances, the pretty original sound Heksen overall posessess plus the fantastic remix and remaster job all raise the final score by another half a point.

Not too much a fan of bands’ anthologies (or even greatest hits albums) I find this one a worthy and very good endeavor, overall, not to mention a great idea. Already original, I hope Heksen will draw the most inspiration from their 2016 LP on future recordings. If you like original death metal that has the appreciation for the old and new school and you don’t mind some thrash and hard core mixed in, check them out.