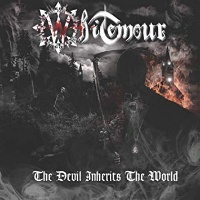 The Finnish blackened death metal outfit consisting of Juha Kormano (bass, guitars), Kristian Nyman (bass, backing vocals), Juho Lepistö (drums) and Petri Haarala (vocals) was formed in 2006 as a black metal band, released a demo "Journal Of Flesh And Blood", two eps: "Chaos Anthem" (2010) and "Astarte" (2012) and subsequently broke up. Reunited in 2014, they switched to blackened death metal, promoted Kormano to a guitarist and found a main vocalist in Petri Haarala, then released a single "Kuolinnaamio" (Deathmask) having started working on the debut album, this here "The Devil Inherits The World", which was released last month. Is Whitemour better at blackened death metal than black metal?

That I couldn’t tell you since "Journal Of Flesh And Blood" is not youtube accessible and both eps seem to already be blackened death metal, but what I can tell you is that this debut album marries the slower, more marching riffs of "Chaos Anthem" with early Amorphis of "Astarte" and that "The Devil…" is a solid release, very well produced by Karri Kallio at Halla Freakquency. All members are clearly giving it all they’ve got with audible bass and massive guitars allowing for the fullness of both abrasive aggression and melodic guitarwork to equally shine forth. Most of the tracks of similar quality balance out Slayer-esque Morbid Angel-ian death with My Dying Bride-ian/early Paradise Lost death and only occasional full on black metal assault (Wrath) but there are some notable standouts. The video lyric single "Malefica" recalls Tristania with ominous choirs and samples of bells backgrounded by burning witches wherein excellent catchy Morbid Angelic riff rhythmically promotes Exodus 22:18 in KJV "suffer not a witch to live" all adorned with tasty melodic Kormano licks, twists and turns, along with pace changes recalling classic Opeth minus clean vocals (none) and the track properly ending the album before the bonus "Kuolinnaamio", "Carnal Obsessions Of Mind" marries slow Morbid Angel with symphonic black metal. I can’t decide which one I like better.

This album being far from perfect, there are two tracks I did not care that much for: the old Hypocrisy-ic "The Day I Died" and the punkish old school death metal piece "Blackheart Deathride", both utilizing silly and distracting bike metal samples, both, therefore, detracting from the flow and momentum of the disc, although, besides, the whole thing is well paced and varied overall.

For a band with 10+ years of experience, the debut is significantly rough around the edges, although I have to commend them on impressively navigating through technicality of Morbid Angel and Slayer, howbeit, with songwriting often too all over the place, as if Whitemour wanted to drink from too many springs at once. They are definitely a talented, skilled and effective bunch and I am reminded of Barren Earth and their debut "Curse Of The Red River" when I think of Whitemour’s future and we all know what bloomed from that tree.