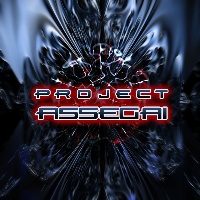 The British hard rock/heavy metal trio Project Assegai was formed in 2014 after Vendetta broke up, guitarist/vocalist Edward Box and bassist Gary Foalle recruiting former Reign drummer Ronnie Mclean to complete the lineup. After four years they finally released the debut album, very well produced by the band itself, Dave Hills, Phil Davies and Neil Lough and mastered by Fred Purser. What can we expect?

We can expect serviceable if severely dated hard rock/heavy metal. Most of the songs pay respect to the long gone and buried era of hair metal, when bands like Dokken, Mötley Crüe, Bon Jovi or Def Leppard ruled the day. But there are a few surprises, such as Anthrax-ian "Judgment Night" or "Conform", the latter the heaviest track on the record, or even the Bon Jovi-ish "Outworld", especially for the simple but excellent ending riffs. The production is very good and section Foalle/Mclean impressive but its Edward Box’s solos that are truly a pleasure to listen to, while his vocalizations, now Judas Priest’s Rob Halford (Judgment Night) now Guns’N’Roses’ Axl Rose (In Your Eyes), now Survivor’s Jimi Jamison, showcase him hardly a one-dimensional vocalist and guitarist.

Where Project Assegain fails is in the songwriting. As previously stated, most songs are average but there a few atrocious ones with that Mötley Crüe-ish swagger and simplicity, such as "No Holds Barred", "Transfusion Of Fear" and "Is This Armageddon" with the last two liberally borrowing from two (!) different parts of Survivor’s "Eye Of The Tiger", and then there’s the inarguably worse and the cheesiest track, "Mother Lode", saved neither by the similarity of the main riff to Megadeth’s "Trust" or its slightly progressive short transition. The album’s two ballads: the Guns’N’Roses-ish "In Your Eyes" (complete with Slash-style solo) and "My Ship Has Sailed", which recalls Anthrax’s "Bare", Annihilator’s "Phoenix Rising" (nowhere near that excellent, though) or, probably the most, Styx’s "Come Sailing Away" do nothing for me although Edward Fox’s uncanny Dennis DeYoung impression would likely make Southpark’s Eric Cartman green with envy.

Far from a revelation I expected it to be, Project Assegai’s debut is a major disappointment, and were it not for Edward Box’s undeniable vocal and instrumental might I would have given it a 3.5/6 score because it simultaneously exposes his apparent inability to consistently compose cogent, interesting songs. The fact that this is a strict studio project with no plans for live applications together with the fragrant antiquity of this material, I take this band to be a mere past time, a hobby, rather than a serious endeavor.