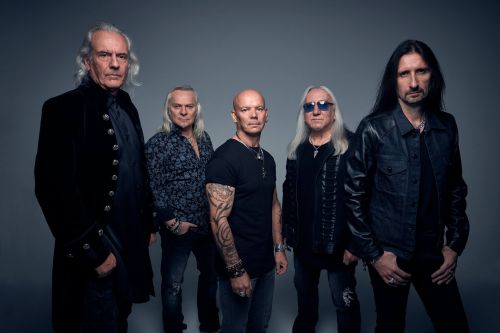 The legendary Uriah Heep paid our lovely city a visit last night (e.n. November 22nd) and it turned out to be a mighty interesting and fun one. The venue that is USF Verftet is without doubt one of the coolest ones in town and it was great to see that the show was sold out and packed to the rafters with fans young and old. Unfortunately, we got off from work rather late and only caught the last song by opening act The Zombies, more specifically the wonderfully psychedelic “She’s Not There”, but it sounded wicked and we were told that it was a strong performance overall.

As to Uriah Heep, they were incredibly tight and the sound that emanated from the speakers was absolutely massive. It was an exhilarating and above all entertaining show with a set list that struck the perfect balance between old and new material. My husband and I cherish the 2018 record “Living the Dream”, so it was a treat to experience fantastic tunes such as “Grazed By Heaven”, “Take Away My Soul”, “Knocking at My Door”, and the magnificent title track. The ballad-like “Waters Flowin’” was a cool surprise and a nice contrast to the heavy and bombastic material. In addition to the new songs, there were some killer renditions of “Return to Fantasy”, “Rainbow Demon”, “Gypsy”, “Lady in Black”, and the epic “July Morning”. You simply cannot argue with the quality of those timeless tracks. Some of the extended parts and sections did go on for a bit too long at times for my taste, but that is the progressive nature of the band and it did not change the fact that it was a terrific concert with plenty of energy to it. Bernie’s vocals were superb, and the band as a whole was outstanding. The encores “Sunrise” and “Easy Livin’” capped off the night and Heep left the stage to a very loud applause.

Uriah Heep are luckily still very much in love with what they do, and they were all smiles and laughs last night. That kind of devotion and dedication to what they do is an inspiring thing to behold. Make sure you catch these guys on tour somewhere near you. Not to be missed!

DAMON JOHNSON – Memoirs of an Uprising